What the India-Pakistan Crisis Taught China 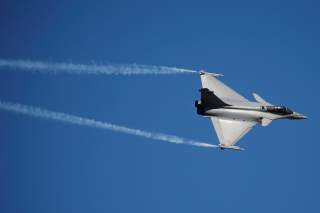 The artillery on either side of the Line of Control—the de facto border dividing the disputed state of Jammu and Kashmir between India and Pakistan—have yet to fall silent. The barrages began last week after both countries launched air raids within twenty-four hours of each other. Fortunately, no further escalation has occurred, nor does it seem likely.

This latest clash between India and Pakistan was triggered by a February 14 suicide bombing on an Indian paramilitary convoy in Pulwama in Indian-administered Kashmir. India responded with air strikes aimed at a redoubt of the Jaish-e-Mohammed terrorist group in Balakot, part of Pakistan’s Khyber-Pukhtunkhwa province. The Pakistan Air Force struck back the next day, in Indian-administered Kashmir. Indian interceptor aircraft engaged in hot pursuit. The ensuing aerial battle led to the downing of a Pakistani F-16 and an Indian MiG-21 Bison. The latter’s pilot ejected, landed in Pakistani territory, and was met by a hostile gathering of local denizens from which he was rescued by Pakistani troops, who took him captive.

Though Pakistanis rejoiced at the Indian pilot’s capture, within a few days their leaders released him. That was a deft and wise decision. Any prolonged detention of the Indian officer, especially one accompanied by mistreatment and extended public humiliation, would have put India’s Prime Minister, Narendra Modi, who has diligently cultivated a tough-guy persona, under immense pressure to up the ante. This is also particularly because, in April, Modi’s Hindu nationalist Bharatiya Janata Party (BJP) will face its resurgent rival, the Congress Party, which has governed India for most of the years since India’s independence in 1947.

Contrary to the fears expressed in some of the more breathless commentaries during the crisis, complete with scenarios of nuclear war, both sides acted cautiously—precisely because they understood that escalation could prove uncontrollable and catastrophic. Their air strikes were limited, calibrated and controlled. Like Britain, China, France, Russia, and the United States, India and Pakistan comprehend the iron logic of nuclear deterrence.

In considerable part, the airstrikes were sops to particular constituencies. In India, Prime Minister Narendra Modi, his eyes on the pre-election polls, felt compelled to demonstrate his resolve after the Pulwama attack, which killed forty Indian paramilitary troops. His Pakistani counterpart, Imran Khan, much beholden to Pakistan’s military establishment, had little choice but to approve a retaliatory airstrike. Events were in the saddle—but happily, not for long.

Though the crisis ended quickly, it revealed chinks in the armor of both countries’ militaries. Indian fighter-bombers penetrated fifty miles beyond the Line of Control, highlighting weaknesses in Pakistan’s air defenses and radar surveillance. As for India, the fact that a forward air base—in Srinagar in Indian Kashmir—felt compelled to scramble decades-old MiG-21 Bisons to tackle F-16s laid bare the weaknesses of the Indian air force.

Yes, the Bison incorporates upgrades in avionics and armament and propulsion that make it a far cry from the original version of the Soviet-era MiG, which first appeared in 1959. But it has a terrible safety record and is, in important respects, approaching obsolescence. The MiG-21 pilots could therefore have been killed, a denouement that would have made the crisis far harder to control.

India has more capable and modern aircraft and yet oddly chose to include an anachronistic one in the Balakot operation. Nuclear deterrence may have averted disaster even had the MiG pilot been killed, but India’s choice of aircraft in effect put deterrence to a needlessly stringent test. Had the Indian pilot died in combat, India would have been forced to strike back in greater force. The Pakistan brass would surely have responded. The result would have been what wonks call a crisis spiral.

Assessments of the crisis have focused almost exclusively on its implications for the India-Pakistan relationship. In fact, it has wider ramifications, certainly for India. The People’s Republic of China (PRC), Pakistan’s “all weather” friend and India’s long-term adversary, was doubtless watching closely—and assessing India’s military capabilities—even as it, to Pakistan’s disappointment, called for restraint by both sides.

Even after twenty-one rounds of bilateral talks, the India-China border dispute remains unresolved. Nor is the frontier quiet. In the summer of 2017, a flare-up occurred at Doklam near the India-Bhutan-PRC tri-junction. The catalyst was an attempt by China’s People Liberation Army (PLA) to construct a road on the Doklam plateau, through disputed territory. Bhutan, which has a security pact with India, turned to New Delhi for assistance. India responded by deploying a contingent of forces to block the road building. That decision did not stem from altruism toward a weak neighbor but rather from the awareness that China, had it completed the road, would have been in a position to launch a pincer movement to cut India’s ground links to its northeastern states in the event of a war.

After an eyeball-to-eyeball confrontation for some weeks, the Doklam crisis dissipated. Both sides withdrew their forces from the region. Yet the PRC has not relinquished its territorial claims there. Anticipating another crisis, Indian military planners have made fitful efforts to bolster security in the neighborhood by building new airfields and moving strike aircraft, including its Sukhoi-30s, and deploying mechanized forces into the area.

Yet India still lacks the wherewithal to deter the PRC in the event of another crisis. For its part, the PRC has been improving its military capabilities along the border for well over a decade, its eyes cocked on India.

Which brings us back to the recent India-Pakistan confrontation.

China’s brass has carefully watched the latest India’s military performance. The important question is whether, in light of Pakistan’s downing of the MiG, Beijing’s perception of India’s military strength has been influenced in ways that could embolden China’s leaders down the line. If it has indeed had that effect, deterrence, while it held recently on the India-Pakistan border, may have been weakened along the India-China border. For India that’s no small matter: China, not Pakistan, remains its most formidable foe.

The Pulwama crisis demonstrated that India needs to improve its intelligence, surveillance, and other defense capabilities if it is to successfully implement a strategy of “deterrence by denial” along the Line of Control. Without appropriate investments in fencing, sensors, and drones India will face similar attacks from Pakistan-based terrorist organizations. And alongside these military measures, India must find ways to reduce the political discontent among the Kashmiris it governs: it won’t do attribute the turbulence in Kashmir to “cross-border terrorism,” real though it is.

India needs to do all this for reasons that go beyond Pakistan. Because military clashes between India and Pakistan offer free lessons to China’s leaders, India’s national security planners have every interest in ensuring that the lessons Beijing learns are, from the standpoint of Indian security, the right ones. The wrong ones could lay the groundwork for another, more dangerous, crisis—and not along the Line of Control in Kashmir.

Sumit Ganguly is Distinguished Professor of Political Science at Indiana University and also holds the Rabindranath Tagore Chair in Indian Culture and Civilization.

Rajan Menon is the Anne and Bernard Spitzer Professor of International Relations at the Powell School, City College of New York/City University of New York, and Senior Research Scholar at the Saltzman Institute of War and Peace Studies, Columbia University.