What Iran’s Budget Proposal Means for the Nuclear Talks 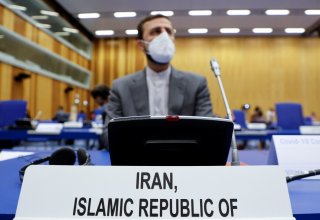 On December 27, 2021, the remaining participants of the Joint Comprehensive Plan of Action (JCPOA) kicked off the eighth and possibly final round of negotiations in Vienna in a bid to restore the Iran nuclear deal. While Iran’s chief negotiator, Ali Bagheri Kani, seemed hopeful after the seventh round of talks, the prospect of a new deal is still uncertain. Iran’s new hardline president, Ebrahim Raisi, has further contributed to the doubts concerning a return to the JCPOA.

On December 12, Raisi’s administration submitted its budget proposal for fiscal year 2022-2023 to the Iranian parliament. The bill indicates how Raisi plans to overcome Iran’s economic challenges, which were exacerbated when the United States reimposed sanctions in 2018. However, the proposed budget also has significant implications for the West as it emulates Tehran’s expectations for the nuclear deal. The report is seemingly pessimistic about the prospects of the ongoing negotiations in Vienna and expects U.S. sanctions to remain in place through 2022. The new proposal underestimates the prior budget’s forecasted crude oil sales by about 1.1 million barrels per day, predicting that oil sales will account for a quarter of the budget at $12.66 billion. Despite the doubtful possibility of sanctions relief, the Raisi administration targets a total economic growth of 8 percent, accounting for 3.5 percent productivity growth and a 4.5 percent increase in investments. Iran’s state media valued the nominally balanced budget at 15,052 trillion rials ($50.2 billion using the free market exchange rate).

The proposed bill compensates for the modestly estimated oil exports with a steep projected increase in tax revenues. The new budget reports a forecasted 62 percent rise in tax revenues totaling $17.5 billion. This projected rise in tax revenue is high even by Iranian budget standards, which often tend to overstate tax collections. The legislation aims to raise revenues by increasing taxes on foreign travel and introducing a value tax on vehicles and real estate properties. The reliance on taxes, among other less significant sources of revenue, suggests the Iranian government is confident that it can weather its economic sanctions.

Thus, Tehran is signaling that it faces no economic urgency to make substantial concessions to U.S. policymakers in the ongoing nuclear talks. This stance is in line with Raisi’s broader conviction concerning increased trade and cooperation with Iran’s eastern neighbors instead of rapprochement with the West. Tehran’s outlook places little faith in sanctions relief and instead looks to economic self-reliance and sustaining Iran’s financial ties to Russia and China as its lifeline. Looking at the proposed budget and Iran’s recent diplomacy, it would seem as though Raisi is not in favor of negotiating a deal that is not entirely in his government’s favor. But analysts should not assess Iran’s commitment to negotiation according to its policymakers’ personalities but the economic and sociopolitical constraints and challenges they will face in the coming year.

While indicators show that the economy has rebounded over the past year, new data could indicate a slowdown in that growth. At its worst, this new data could signal a return to contraction in the near future. Iran’s new Purchasing Managers’ Index (PMI) data suggests that businesses struggle with high prices and limited inventories of raw materials. Paired with inflation, these economic shortcomings have contributed to the decline in the overall economy PMI. Several sectors spanning agriculture, housing, and services remain hindered by weak demand as the country struggles under the combined weight of external sanctions and Covid-19. Although inflation has fallen over the past month, the current inflation of 44.4 percent means that the improvement does little to alleviate the sharp decline in purchasing power. The Raisi administration is taking steps to boost the economy but still resists directly addressing the impact of sanctions. Tehran has also continuously offered discounts on oil exports to induce buyers to circumvent U.S. sanctions. But some economic experts are not convinced of Tehran’s ability to improve the economy without addressing sanctions directly and predict Iran’s budget deficit can end up 50 percent higher than the current deficit if negotiations break down. In addition to leaving sanctions unaddressed, relying more heavily on tax revenues is expected to hinder Iran’s national income growth.

Iran’s economic challenges have catalyzed a series of nationwide public protests. Workers went on strike for better wages at government-owned petrochemical facilities in southern Iran, while in Isfahan, farmers and residents protested due to water shortages this past November. Teachers across Iran have also taken to the streets to demand higher wages and better working conditions. These protests highlight a greater sense of urgency for the Raisi administration, which pledged to diversify Iran’s economy and create about 2 million jobs by March 2023. The direct link between Iran’s sociopolitical situation and its economic condition makes it less feasible for the Raisi administration to test a new fiscal strategy centered around self-reliance. As such, Tehran may remain committed to the JCPOA despite signaling a different message through its recent budget proposal.

Raisi’s government may also feel compelled to address sanctions directly for reasons other than alleviating the pressures on Iran’s economy. The proposed bill plans to increase investment in Iran’s Islamic Revolutionary Guard Corps (IRGC). According to the proposed legislation that awaits parliament approval, the IRGC will receive $22 billion, double its allocation in 2021. In contrast, the standard military will receive $7.99 billion in 2022. One noticeable area for investment has been the IRGC’s navy, whose new designs show a shift to more conventional naval capabilities. The feasibility of such investments is contingent on Iran’s ability to grow its economy and lessen the burden of its deficit. Unless Tehran aims to prioritize the IRGC’s needs over other expenditures, Raisi will need to consider the most viable way to negotiate the removal of U.S. sanctions. With the eighth round of talks in Vienna, a final agreement between Iran the West is still uncertain. Given that Iran demands the lifting of all U.S. sanctions, a breakthrough in negotiations is still not visible. But Raisi has assured that Iran is taking the Vienna negotiations seriously, and the constraints his government faces due to sanctions leave the option for concessions open.

Arash Toupchinejad is a Junior Research Fellow at the NATO Association of Canada and an MSF Candidate at Georgetown University. He is also a columnist for the European Student Think Tank.