This Is What ISIS' Rise Means for the “Kurdish Question” 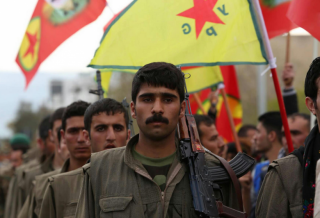 The rise of the group that calls itself the Islamic State (also known as ISIS) is changing the political landscape of the entire Middle East, fueling old tensions while also creating new ones. More recently, much ink has been spilled on the sectarian tensions between Sunnis and Shiites. However, while many analysts debated the actual or potential military effectiveness of the Kurdish paramilitary groups against ISIS, the implications of the organization’s rise to prominence for the fate of the Kurdish populations in the Middle East remains a relatively underexplored area.

The so-called “Kurdish question”—the fact that while they can easily fulfill the criteria for nationhood, Kurds have long been denied self-determination, “trapped” and divided inside the borders of four sovereign states—has been one of the most persistent yet relatively ignored puzzles of the Middle East during the century that followed the demise of the Ottoman Empire in 1923. It has been persistent, in the sense that the Kurdish populations spread out in modern Turkey, Iraq, Syria and Iran have resisted assimilation to the broader putative “nations” that controlled the central governments in their respective territories.

The fate of the Kurds, in so many ways, has also been ignored by the international community for a number of reasons. First, the Kurdish question is partially a result of the post-WWI “slicing and dicing” of the Ottoman lands by the Western powers, who were at the time more concerned with either maximizing their geopolitical influence in the region or keeping a lid on the underlying tensions, usually by appeasing the dominant factions. In such a landscape, to put it bluntly, Kurds “mattered less” than other social or political groups for the so-called international community.

Second, while it is tempting to think of the “Kurds” as a homogenous and unitary political actor that has moved across time as “one,” only to be divided by colonialism and then the four states that control Kurdish-majority lands within their respective territories, the Kurdish populations have long been politically fragmented. The division did not only cut across the existing state boundaries; the Kurds within the respective states—especially in the absence of a state-like political entity that could act as a glue or catalyst—also found it difficult to overcome their collective action problems, partially due to the inherent feudal [or tribal] political structure that marked much of the Kurdish-populated terrains, as well as differences in dialect and customs.

Third, and perhaps most importantly, the states that ruled over the Kurds did their best to arrest the development of a Kurdish nationalist movement within their territories. Turkey’s response to the Kurdish question is an exemplar. The Turkish state utilized numerous measures from outright repression to the co-optation of tribal/feudal elites to systematic assimilation (For example, during the military-dominated 1980s, some state officials even claimed that Kurds were in fact “mountain Turks” who were a little confused in the language department). Note that Turkey’s attempts to contain the Kurdish nationalist movement, which eventually triggered a slow-burning civil war that claimed more than 30,000 lives in the last three decades, still paled in comparison to those initiated by Saddam Hussein’s Iraq. Put simply, not only were the Kurds trapped and divided inside four sovereign states, they were trapped and divided inside states that did not shy away from repressive measures to keep them down.

In such a landscape, the broader Kurdish question took the backseat in the global agenda. True, there was the Kurdish Regional Government (KRG) in northern Iraq that acted almost like a quasi-independent state after the fall of the Baathist regime, but the KRG kept a rather low profile in the last decade, neither aggressively pushing for a Kurdish state carved out of Iraq, nor directly empowering Kurdish separatist or irredentist movements elsewhere. Turkey’s clash with the insurgent group PKK (which is formally recognized as a terrorist organization by numerous states, including the United States), in turn, remained a problem for Turkey to solve. And let’s be honest about Syria: Very few among the so-called global audiences actually knew of (or, more precisely, cared about) the Syrian Kurds until recently. Iranian Kurds have been even less “visible”; geographically dispersed when compared with their kin in the other three countries and living under the iron fist of a revolutionary state, they rarely, if ever, made the news (even after the ISIS debacle).

All this changed with the rise of the ISIS. As the global audiences were quite literally shocked and awed by the organization’s much-publicized brutal acts and strategic dexterity, not to mention the speed of its initial territorial expansion, the Kurds also began to make headlines, first as the victims of the barbaric hordes of the self-proclaimed Caliphate, then as its most capable and willing adversaries. There is almost unanimous agreement over the value of the Kurds in the struggle against ISIS. They are more capable and reliable than the Iraqi army and less inflammatory, from a sectarian perspective, than the Shiite militia that is backed by Iran. The only minor problem, so the argument goes, is that Kurds may be more of a defensive than an offensive force. If only the West can find a way to motivate the Kurds a little more, the conventional wisdom suggests, ISIS can be liquidated much more effectively as a fighting force.

This narrative, dominant among Western analysts and policy makers, is only partially accurate, and therefore completely misleading. Any story about the implications of ISIS for the Kurdish question should start with a simple recognition: Speaking of “the Kurds” as a homogenous and unified political and military entity does not make analytical sense. There are three relevant paramilitary group to speak of: Peshmerga in Iraq, PKK that operates in Turkey, and YPG, the military arm of the Syrian Kurds.

Of the three, Peshmerga appears to be the most powerful actor, yet also the most prudent one. Empowered by the KRG, Peshmerga can draw on not only well-supplied and well-equipped forces, but also legitimacy in the international sphere. Note that there exists a very good reason behind Peshmerga’s prudence, or defensive posture vis-à-vis ISIS: The KRG already governs the Kurdish-majority areas in Iraq and is recognized as a capable political entity that established a beacon of stability in the heart of the Middle East. The KRG, acting more like a “realist” state than anything else, understands that any attempt to take over more territory or to claim outright independence will trigger an immediate—and most likely, harsh—reaction from a multitude of regional actors, including Turkey, with whom the Iraqi Kurds have established a robust relationship.

All the KRG needs to do at this stage is to keep calm and carry on, waiting for the day when its de facto near-independence will pave the way, if gradually, for de jure sovereignty. That is, if the Iraqi Kurds ever decide they can be better off all on their own. The same prudence also accounts for Peshmerga’s reluctance to actively participate in the defense of the Syrian town of Kobane. Not only would it be too costly to send forces into the heart of ISIS-land, the KRG would also run the risk of appearing as the “Prussia of greater Kurdistan” [circa 1860s], a revisionist force that aimed to create an expansive Kurdish state that could carve up territories from Syria, and even Turkey and Iran down the road.

PKK and YPG, in turn, are close associates with organic ties. Both organizations are “hungrier” than the KRG, as they have yet to consolidate their power in their respective domains and establish some sense of self-sufficiency and security. They also share a similar left-leaning political ideology. While it is safe to assume that these organizations act in tandem, there are also differences between the two. First, while PKK is considered a terrorist organization, YPG established itself as a legitimate militia whose main intention is to defend the Kurdish populations in Syria.

Second, while PKK is forced to remain on the run as an insurgent group, YPG is part of a political establishment that governs territory. In 2012, Syria’s Assad regime decided to let go of the Kurdish-populated areas in northern Syria without a fight, freeing resources to tackle its more-immediate enemies elsewhere. Assad’s decision then triggered what is now known as the “Rojava [Western Kurdistan] Revolution,” which led to the creation of self-governed Kurdish “cantons” in Syria, protected by YPG. ISIS’ implications for the Kurdish question, in fact, are better conceived in terms of the consequences of the Rojava Revolution.

So, what are those implications? ISIS presents the Kurds with threats and, while few talk about it, opportunities. The threat part is real and straightforward: ISIS does not hide its intentions to either eradicate or subdue the Kurdish populations in Iraq/Syria and has already caused considerable suffering to the Kurds. That the suffering is real, however, should not detract from the opportunities that ISIS provides to the Kurdish groups in the region. We can talk about four key areas.

First, ISIS quite literally presents an existential threat to Kurds and by doing so incentivizes them to unite under a common banner. Note that the KRG, as a self-sufficient and (much more) secure political entity has less of an incentive to flock to the other groups, but may prefer to “lead” them toward the path of a slow-motion unification. YPG and PKK have incentives to stick together, but will likely be put off by the KRG’s patronizing and relatively aloof posture. Regardless, as far as external threats that can inspire social and political cohesion go, it is tough to beat ISIS.