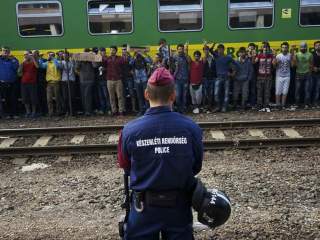 On Tuesday, March 22, twin explosions at the Zaventem Airport and Maelbeek Metro Station rocked Belgium’s capital city of Brussels, killing at least thirty and injuring 230. This comes just days after authorities captured one of the key figures involved in the November 13 Paris attacks, Salah Abdeslam, in the Brussels suburb of Molenbeek. Pundits and terrorism experts alike will spend the weeks and months ahead outlining how Belgium and Europe need to strengthen their counterterrorism capabilities.

These ideas are important. But these events will also undoubtedly fan the flames of right-wing anti-immigrant rhetoric spreading throughout Europe, despite the fact that two of the three Brussels attackers were identified as Belgian citizens. Ultimately, this will harm the thousands of migrants arriving to Europe’s shores by the week who seek asylum from their war-torn homes. Rather than falling prey to inflammatory rhetoric from right-wing parties, which further fractures a delicate political climate, Europeans must present a united front and stand against these anti-immigrant and anti-refugee policies.

Over the past year, Europe has dealt with a refugee and migration crisis of historic proportions. Over one million migrants poured into Europe in 2015, compared with only 280,000 the year before. Of this number, 50 percent of those making the treacherous journey across the Mediterranean Sea by boat were Syrian, and 7 percent Iraqi. This poses a catastrophic and long-term challenge to Europe—the refugee crisis has enabled a migrant crisis, which has exacerbated the fissures within the European Union in regards to migration policy. The EU’s twenty-eight members vastly differ on how to handle mass migration, and the approach various EU member governments take in accepting both refugees and migrants runs the gamut.

Within Europe, German Chancellor Angela Merkel welcomed almost one million asylum seekers in 2015 alone, citing Germany’s “values and social order.” Of that number, 484,000 came from Syria. Similarly, French President François Hollande has said France will welcome thirty thousand Syrian refugees over the next two years, also adding that he will invest over $50 million to develop housing for refugees. But not all European countries have been so open-minded. Hungarian Prime Minister Viktor Orbán, for example, has taken a starkly divergent stance, saying Europe is under threat over immigration and refugees. Hungary even went so far as to build a 110-mile wall along its border with Serbia, and passed a law allowing the military to use tear gas, net guns and rubber bullets to control migrants at their border.

Regardless of how many refugees or migrants any given country in Europe has accepted over the past year, the issue has had a detrimental impact on Europe’s political scene. For example, migration policy is a key driver of the “Brexit” movement. On June 23, the United Kingdom will hold a referendum to determine whether or not it stays in the European Union. Pro-Brexit politicians seized on the Brussels terrorist attacks to push their agenda, stating the attacks “show that Schengen free movement and lax border controls are a threat to [Britain’s] security.”

But it is not just Britain dealing with anti-immigrant and anti-refugee rhetoric. Europe as a whole has seen a shocking rise in right-wing parties, and public support for these parties has dramatically surged in the wake of attacks on the European continent, from Brussels to Paris to the spate of attacks in Cologne on New Year’s Eve 2015.

Sweden, for example, has historically been one of Europe’s most open and asylum friendly societies. Recently, however, the Sweden Democrats, a group with ties to neo-Nazism, enjoys support from about 20 percent of the public. Similarly, France’s National Front, led by Marine Le Pen, is now a legitimate third party in French politics. Le Pen pushes a xenophobic and nationalist message, and following the horrific terrorist attacks in Paris in November 2015, she used the opportunity to declare France “unsafe,” calling for a halt to all Syrian refugees. Other European countries are seeing increases in popularity of similar parties—the Jobbik party in Hungary, the far-right Freedom Party in Austria and the Danish People’s Party are just a few examples.

Terrorist attacks like the one that took place Brussels will undoubtedly exacerbate an already serious problem on the European continent, and it is easy for right-wing parties to use examples like this to vilify the entire immigrant community. In fact, it is already happening. In the wake of this week’s attacks, Austrian far-right leader Heinz-Christian Strache said, “irresponsible mass immigration from the Arab world must be ended once and for all,” and Hungarian Foreign Minister Péter Szijjártó said, “there is no doubt that illegal migration is behind the rise in the terror threat.” This inflammatory language spread even before two of the three attackers were successfully identified as Belgian. This approach is not only wrong, but it directly contributes to Europe’s current state of disunity and internal conflict.

European leaders are currently grappling with how to simultaneously handle multiple crises—from a resurgent Russia, to a potential Brexit, to a sluggish economy, to mass migration. This is admittedly easier said than done. Going forward, European governments need to reassure their publics that they are taking every possible step to ensure the safety of their citizens, which includes strengthening counterterrorism policies and border controls.

But, at the same time, Europeans cannot let concerns over counterterrorism, migration and refugees overshadow the importance of maintaining open societies. Today, it is more important than ever for Europe to push back against right-wing anti-immigrant rhetoric and unite around its historical core values to ensure the strength of the European project for years to come.

Rachel Rizzo is a researcher in the Strategy and Statecraft Program at the Center for a New American Security.