What the Kavanaugh Hearings Tell Us About America 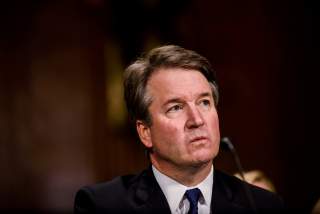 Many things were said during the Christine Blasey Ford and Judge Brett Kavanaugh hearings, but the one word that reverberated in my own mind as I listened was absent both literally and substantively—resilience. That word that insistently came to me as I heard Ford, a professor at a world-class university, declare herself “terrified” to be speaking before a perfectly sedate and courteous audience. I thought about resilience when I heard Ford describe a certainly unpleasant but not very exceptional experience: partying, drunk boys, boys behaving abominably, a girl getting away before any further harm is done. Ford described these instances as something so traumatic that it deformed the rest of her life, sent her to therapy and obliged her to install two front doors in her home. Resiliency also came to mind as I saw Kavanaugh deliver an obviously rehearsed self-righteous outraged speech only to collapse into a state of constant near-tears, including lengthy pauses when he couldn’t speak at all but had to go through all sorts of facial contortions to try and get hold of himself. Resilience was a characteristic not on display that day by either of these two individuals.

Here is the definition of resilience: it is the ability to successfully cope with a crisis and to return to pre-crisis status quickly. Resilience exists when the person uses mental processes and behaviors, promoting personal assets and protecting an individual from the potential negative effects of stressors.

I am not saying that “boys behaving abominably” is something we should accept as natural and eternal. I’m not even saying—though if I am honest, I have to admit that the thought occurred to me—that words like “terrified” and “traumatic” and “damaged for life” are perhaps better applied to other situations. For instance, Yazidi women who spent a year enslaved and shared out among ISIS fighters, civilians trapped in Mosul, or the village women in Democratic Republic of Congo who are not just raped by militants but are afterward slashed internally with bayonets. These people can proclaim themselves terrified, these people bear lifelong scars, and these people have resilience. They pull themselves together and they go forward. I know the situations are not comparable. Those who live in the West and expect a higher standard of personal safety. Moreover, “of happiness and despair there is no measure,” and if Professor Ford says she is terrified and traumatized, then that’s her right, and if Judge Kavanaugh became overwhelmed then yes, men have a right to cry.

But personally, the thought of young American soldiers dealing with PTSD from seeing their comrades blown up in front of them and the injured young men and women I encounter at Walter Reed, whose children now have a parent with no limbs left to hug them, would have given me pause if I was to testify. I would have made me pause before I chose to occupy a full day of congressional time with an experience I had at a party thirty-five years ago, and might have kept me dry-eyed despite the embarrassing stress being placed on my family as I applied for the honor and power of sitting on the Supreme Court.

And then there’s that little thing called reality. One reality is that boys and men are often sexually aggressive towards girls and women. How often? Very often. So if you are a girl or woman, be aware and have a plan, and perhaps some pepper spray. Another reality is that the political process in the United States has become vicious, adversarial and relentlessly partisan, and will not spare your family or your feelings. Deal with the heat or stay out of the kitchen.

The day after the hearings, I came across this passage in an article: “They do not grow up learning to recognize predators or predatory behaviors. This so-called “prey naivete” makes them easy pickings.” It sounded like a very accurate description of young women who go to frat house parties, allow themselves to be plied with large amounts of alcoholic concoctions of unknown ingredients, get into cars with men they don’t know, then find themselves in dangerous and unpleasant situations they can’t control.

The article was not actually about that, though. It was about an exciting new approach invented by wildlife preservation experts, and they were talking about black-footed ferrets and other adorable, furry, endangered little animals. The new method, termed “wildlife bootcamp,” seeks to enhance the survival chances of animals whose constitutions incline them to be passive. This is done by teaching them to be alert for predators, aware of their surroundings, and prepared to take defensive measures that will prevent them from being eaten. I submit that this is what our daughters—and apparently, our Supreme Court nominees—need. They must be told that it’s a jungle out there, in which you must learn to avoid danger. They must be told to defend yourself if attacked; and if that fails, to pick yourself up and keep going.

I submit that we should study the example of Elizabeth Smart. Kidnapped at knifepoint from right out of her own bed at age fourteen by a lunatic couple, she was kept prisoner for nine months, raped daily, and regularly threatened with death. Upon finally being freed, she relates, her mother advised her that the best way to get back at her captors was to be happy, which is advice that she chose to follow. She is today a lovely, successful woman with a profession, a charity, a husband and children and the admiration of her community. She emerged a victor, not a victim.

Another example is Jason McMillan, who was left paralyzed in a wheelchair after he shielded his girlfriend during the Las Vegas shooting. He has something to cry about, but that’s not what he’s doing. He’s getting married, acquired a puppy, and is taking specialized scuba diving classes. He’s developed a personal mantra, he says, to “reflect his resilience: adapt and enjoy yourself.”

Should a fifteen-year-old girl be able to go to an unchaperoned party where alcohol is being consumed, with guys from a private school that has a bad reputation for frat boy behavior, without fear of being groped? Yes, she should. Would it be a better world if adorable little black-footed ferrets were not being torn to pieces by evil foxes? Yes, it would. And world peace would be nice, and an end to poverty would be nice, and Muslims and Jews living in harmony in the Middle East would be splendid. But that’s not the planet we live on. Let’s work towards those things, by all means. But in the meantime, let’s be smart, cultivate a sense of perspective, and keep our cool.

Cheryl Benard is a former program director with the RAND Corporation.