What Kim Jong Un Really Wants, and How America Should Respond 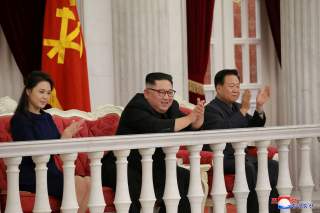 Building the “ultimate weapon” and behaving recklessly, North Korea has for decades been causing big headaches for the outside world. Due to its unique political system, dealing with North Korea hinges heavily on understanding what its supreme leader wants. At first sight, Kim Jong-un appears to be one of the most enigmatic leaders in the world today, but a deeper look at his action reveals a rational and coherent strategy. Kim is changing his country, and the best policy for America is to seize this opportunity with continuous and protected engagement.

In the first six years of his rule, between 2012 and 2017, Kim pursued a massive program to develop nuclear weapons and intercontinental ballistic missiles. The tests conducted under his rule were far more frequent and more aggressive than those under his father and grandfather, the previous leaders of North Korea. In March 2018, taking the world by surprise, Kim abruptly changed course and launched a charm offensive aimed at meeting with the U.S. president.

The near consensus we’ve had for decades about the motive behind North Korea’s nuclear and missile programs is that its leaders fear U.S. invasion and they can feel secure only when they possess the capabilities to deter it. This makes sense, but it does not explain the scale and frequency with which Kim pursued his weapons programs. In fact, Kim did not need more nuclear weapons and longer range of missiles than his father to deter a major U.S. military attack.

Tens of thousands of U.S. personnel and about thirty million South Koreans, which is 60 percent of the South’s total population, are living within the North’s artillery range. The U.S. Department of Defense estimated in 2006 that North Korean artillery barrages could inflict 250,000 casualties in the Seoul metropolitan area alone. Tabletop exercises conducted by the U.S. military in February 2018 predicted that roughly ten thousand U.S. troops could be wounded in the opening days of a war with North Korea before it might turn nuclear.

Kim Jong-un’s military buildup and diplomatic about-face make more sense from the perspective of a young ruler and the logic of domestic legitimacy. Kim started his rule when he was not even 30 years old. Emerged from secrecy to inherit his father’s position at a very young age, Kim badly needed to prove he is up to the job—he lacked all the credentials for a military and state leader that his predecessors possessed. Kings and dictators know that simply being a grandson of the dynasty’s founder and simply sitting at the top of a hierarchy are far from enough for a stable rule. The top position is even more precarious for the new ruler as the ruling elite are mostly one generation or two senior than Kim, thus having every reason to doubt his competence in leading them. Except for his younger sister Kim Yo-jong, the other twenty-eight Politburo members of the Workers’ Party of Korea are between twenty and fifty-six years older than Kim.

In order to demonstrate his competence, Kim turned to formidable weapons and powerful foreign leaders. Within five years from 2013 to 2017, Kim added four more nuclear tests to the two tests initiated by his father since 2006. By 2018, with six nuclear tests, North Korea felt confident enough to self-impose a nuclear and missile test ban. Six is also the number of tests each of two other powers, India and Pakistan, has conducted, and they have secured their place in the pantheon of nuclear weapon states.

Kim also built longer-range rockets that can hit anywhere on earth. In November 2017, Pyongyang successfully tested an intercontinental ballistic missile, the Hwasong-15, which, according to former U.S. Secretary of Defense Jim Mattis, “went higher, frankly, than any previous shot they’ve taken, a research and development effort on their part to continue building ballistic missiles that can threaten everywhere in the world, basically.” After the launch, Kim proudly declared North Korea had “finally realized the great historic cause of completing the state nuclear force.”

Having established himself as a formidable military leader, Kim launched a diplomatic offensive in March 2018, calling on the U.S. president for talks. On this front, his meeting with President Donald Trump has placed him on a par with the top leader of the world’s mightiest country. In public appearance at their first summit in Singapore in June 2018, Trump treated Kim with full respect as a co-equal and repeatedly praised the North Korean leader. When asked by journalists what he took away from meeting Kim, the U.S. president said, “I learned he’s a very talented man. I also learned that he loves his country very much.”

Kim Jong-un’s behavior suggests that North Korea is a geopolitical opportunity that masquerades as a security threat. His weapons programs had to pose a credible threat to the United States because that was the way for him to credibly demonstrate to his domestic audience that he is a leader worthy of admiration. The nuclear weapons and ballistic missiles developed under his rule added marginally to the real deterrent he had already possessed vis-à-vis the United States. Their “deterrent quotient”—the relative contribution of these additional weapons to North Korea’s total deterrent capabilities—would increase significantly in a hypothetical future when the United States had withdrawn its troops from South Korea. They would also gain more weight in North Korea’s deterrent against China when North Korea would be no longer near an economic collapse. These hypothetical futures are among the scenarios policymakers in Washington, Beijing, Seoul, and Tokyo must consider. But in Kim’s plans, their significance pales in comparison with his concerns over his current domestic legitimacy.

Kim’s young age nearly forces him to make quick and ambitious achievements, but it also encourages him to think long-term about boosting the economy and improving his country’s place in the world, which will entail economic reform and geopolitical repositioning among the great powers and regional states. With over 40 percent of the population undernourished and the economy dependent on Chinese supply of food and fuel, Kim cannot rule the country for long without change.

Kim’s seven years in power have charted a clear and coherent trajectory. A little more than a year into his rule, in March 2013, Kim announced a new policy, called byungjin, to replace his father’s “military first” policy. Byungjin translates as “parallel advance,” and the policy was aimed at both nuclear and economic development. After reaching a full-fledged nuclear weapon capability in late 2017, Kim declared in early 2018 a “new strategic line” that would “concentrate all efforts of the whole party and country on the socialist economic construction.” At the same time as Kim was switching tracks to the new strategic line, he offered unconditional talks with the United States and started to warm up ties with South Korea.

The focus on economic development and geopolitical repositioning is not a pretense. Ever since taking power in 2012, Kim has held to a new economic approach that shares decision-making power and benefits more widely and lower down the chain. Once removed from the verge of economic collapse, North Korea will lose much of its present deterrent vis-à-vis China. Because its collapse constitutes the most of its current deterrent to China, if nothing else changes, an economically viable North Korea will be more vulnerable to Beijing’s pressure. Setting the economy on a growth path also requires massive foreign investment and trade. China, with its deep pockets and the ambitious Belt and Road Initiative, stands more than ready to grasp this opportunity, but a one-sided opening to China would only shorten the Chinese tether. Kim’s reaching out to South Korea and the United States would serve not just to remove sanctions but also to place North Korea on a balanced position when it moves forward with economic development.

Responding to a changing North Korea, the United States must revise and update the assumptions of its policy. Washington cannot formally acknowledge North Korea’s status as a nuclear weapon state, but it must recognize that complete denuclearization may take decades to realize. Full sanctions and maximum pressure have not been and will not be able to force Pyongyang to give up its nuclear weapons because China has both the need and the ability to keep it from collapse. North Korea’s complete denuclearization remains an aspiration in the long run, but it will be a byproduct of a successful engagement policy, not a condition for normalization of relations with the United States.

Washington should pursue a policy of continuous and protected engagement with the North, one that is constantly adapted to the developments on the Korean Peninsula and in the larger East Asian region with the aim of shaping a regional balance of power favorable to the United States in its larger and long-term competition with China. The continuous nature of this policy is to keep talks and build trust with North Korea, but continuous engagement does not preclude occasional pressure and punishment to protect it from exploitation. Nor does this engagement policy suggest any loosening of the U.S.-South Korean military alliance. Indeed, North Korea will have to realize, as the North’s then-supreme leader Kim Jong Il told then-U.S. Secretary of State Madeleine Albright in 2000, that U.S. military presence in South Korea is a stabilizing force for Asia.