What Is Kim Jong Un Thinking? 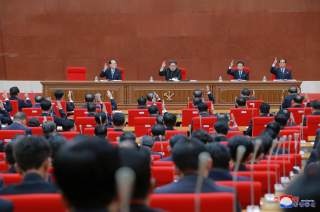 Welcome news from North Korea—it used to be a rarity.

But Pyongyang’s announcement that it will stop nuclear tests, ICBM launches and close a nuclear test site is just the latest in a rapid-fire series of unexpected developments on the Korean Peninsula this year.

The regime’s statement raises hopes that recent diplomatic initiatives will fare better than previous failed efforts, and that the upcoming summits will lead to progress if not breakthroughs.

But as is usually the case with North Korea, there is less reason for optimism than initially appears. We’ve been down this path many times before and it has ended at a cliff.

The test moratorium publicly affirms what a senior South Korean delegation claimed Kim Jong-un had told them at a meeting last month. Along with CIA Director Mike Pompeo’s clandestine meeting with Kim earlier this month, it is another indicator that the U.S.-North Korea summit will take place.

But Kim may have multiple motives for publicly announcing the test moratorium now. He could be:

- Ensuring that it is not seen as a concession wrested by Trump;

- Laying the groundwork for blaming others for failed summits;

- And signaling that he is coming to the summits from a position of strength rather than weakness.

North Korea has previously announced nuclear and missile moratoriums only to rescind them. The current pledge is also easily reversible. American experts had assessed that North Korea’s nuclear test site may no longer be viable. Last year’s test of a more than 150 kiloton hydrogen bomb literally moved the mountain, collapsing test tunnels. It may also have vented radioactive gases.

The regime’s statement also reiterates its long-standing pledge never to use nuclear weapons “unless there is a nuclear threat or nuclear provocation to our country.” Pyongyang’s definition of “nuclear threats” may be expansive though: in the past, for example, it has described both U.S. and South Korean military exercises as preparations for nuclear attack and invasion.

Most importantly, North Korea’s statement did not include any indication of intent to commit to denuclearization during the forthcoming summit meetings. Kim declared “solemnly” that North Korea had completed “miniaturization and lightening of the ultra-large nuclear weapon [and] fully realized the nuclear weaponization.”

It is important to interpret the statement in the context of a parallel statement by official regime media. Kim’s Korean Central News Agency reported that “no nuclear test or intermediate-range or ICBM test fire are necessary now, given that the work for mounting nuclear warheads are finished.”

Essentially, Pyongyang is declaring that it won’t test because it no longer needs to. That’s far different from abandoning testing as a prelude to ridding itself of nuclear weapons and ICBMs.

Kim may also be signaling his opening position for the summit meetings. Pyongyang declared that “suspension of nuclear testing is an important process for global nuclear disarmament” (emphasis added). Over the years, North Korea’s negotiating position has evolved from pledging to never build nuclear weapons, to then promising to abandon them, to more recently signaling it will give up its nuclear arsenal only in conjunction with other nuclear nations eliminating theirs.

By adopting a stance of mutual arms control rather than unilateral North Korean denuclearization, Kim may attempt to put the onus on U.S. possession of nuclear weapons. For Kim, this has the added benefit of helping North Korea gain formal recognition as a nuclear weapons state.

North Korean officials have often privately commented they envision following the path to nuclear statehood blazed by Pakistan—i.e. Islamabad endured U.S. punitive measures during the nuclear testing phase, but once its program was successful, the United States tacitly accepted it into the nuclear weapons club.

Rather than a signal of acquiescence, the North Korean statement could be interpreted as a gesture of defiance. Kim Jong-un is clearly raising the stakes for next week’s inter-Korean summit.

Will South Korean President Moon embrace the gesture as vindication of his efforts at peninsular reconciliation and tension reduction, or will he push back by demanding more tangible North Korean pledges of denuclearization?

And how will the results of the North-South Korea summit affect President Trump’s preparations for his meeting with the North Korean leader?

The Yogi Berra-sim of “It’s difficult to make predictions, especially about the future” comes to mind. But what is certain is that the Korean Peninsula has not seen the last of this year’s startling developments. The wild rollercoaster ride of ups and downs will continue, although there’s no telling where it will end.