What Kind of Power Does India Want to Be? 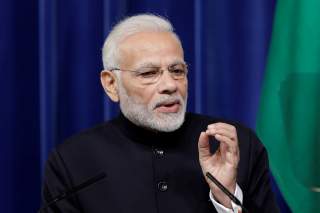 The rise of Asia has thus far been characterized by the rise of a powerful China, which looks intent on rebuilding the regional order to suit its interests. However, it is not the only rising Asian power. India, another great Asian power—a nuclear power with 18 percent of the world’s population and nearly 8 percent of global GDP at purchasing power parity (PPP)—is watching China’s moves carefully. Spending large amounts of cash across the Indian Ocean Region (IOR) on a number of strategic ports, China is wooing many states that have traditionally looked to India for leadership. There seems to be uncertainty in New Delhi on how to respond to this, and to some, it is yet more evidence that India must develop its foreign and security policymaking structures. Currently, the argument goes, India’s elites are struggling to discern both the trends that affect India and to lay out good policy options to deal with these trends. As a result, India’s foreign policy apparatus seems to just muddle along, unable to make grand strategy, much less, implement it.

To some, the underdeveloped nature of India’s foreign policymaking structures has deep roots. Bharat Karnad, an Indian international relations scholar and think tanker, argues that this stems from India’s geography. Encircled by vast seas and the towering Himalayas, it has been somewhat insulated from the world, and while Jawaharlal Nehru, India’s first prime minister, sought to change that, his promotion of nonalignment seemed to institutionalize India’s detachment from global affairs. This policy allowed New Delhi to abstain from making a choice between the two camps of the Cold War and left a long shadow on India’s foreign policy, which became characterized as strategically reticent and ambiguous. As recently as 2012, foreign policy elites and scholars were once again discussing reviving the policy in the book, Non-Alignment 2.0, which sought to identify the basic principles that would guide India’s foreign and strategic policies.

Despite this Nehruvian legacy, there are signs that India’s elites want to reform the old institutions and engage more assertively with the world. To outsiders, Prime Minister Narendra Modi looks like the highpoint of this reform movement. Intent on positioning India in a leading global role, Modi has made more than eighty visits abroad in only four years. He has developed strong relations with the Association of Southeast Asian Nations (ASEAN) and the Pacific islands, and has begun investing in Central and West Asia as a means of balancing China’s growing footprint there. His Indian Ocean outreach has reaped some remarkable results: experts claim that India’s infrastructure development plans in the Agaléga archipelago in Mauritius will significantly enhance its military presence in the region.

Despite these encouraging signs, it is clear that reforms of India’s foreign policy apparatus and political culture will also need to take place. India’s Ministry of External Affairs (MEA) has a problematically understaffed diplomatic corps—only an eighth the size of the United States’—but interestingly, it has also long struggled with excessive red tape: its many secretaries, additional secretaries and joint secretaries lead area or issue-based divisions, producing uncoordinated, ad-hoc, status quo-leaning policies. While the MEA’s website proudly lists the hit Bollywood films its diplomatic missions screen globally, it lacks a clear policy strategy document explicitly laying out India’s national interests and core values, an essential tool for coordinating the work of and giving shape to the fragmented agencies of the MEA. The lack of such a strategy document means that India’s foreign policy really just becomes a never-ending tussle between nonalignment and restraint on the one hand, and pragmatism and power projection on the other.

In terms of developing a strategic culture, India may soon follow the United States, United Kingdom, Japan and others in developing a national security strategy policy document. This new document, drafted by the newly-established Defense Planning Committee (DPC) is reportedly ready to be scrutinized at the highest level. According to Bharat Shakti—a military blog—a number pivotal positions are being considered, including three deputy national security advisors, a military advisor, an empowered National Security Council with a revamped strategic policy group, and a better funded secretariat. Furthermore, a MEA-run think tank, the Centre for Contemporary China Studies, will be following and assessing Chinese power across the military, economic and political spectrums.

As the international system becomes increasingly complex, it will be important for India’s leaders to provide coordinated advice to the executive. Like other powers, this will mean improving relations between the military and the civilian bureaucracy of the Ministry of Defense (MoD)—the latter having relatively less expertise on military issues despite having considerable decisionmaking powers. This situation is analogous to that which took place in Japan vis-à-vis the civilian and uniformed parts of the Japanese MoD during the 2000s and is an important aspect of coordinating national security strategy.

While these reforms may improve civil-military relations, it would be worrisome if they—by making a powerhouse out of the national security advisor—put the final nail in the coffin for the oft-repeated and oft-dodged recommendations to appoint a chief of defense staff or at least a permanent chair of the chiefs of staﬀ committee. It is unclear whether these reforms will have a substantial impact on the state of jointness in the Indian Armed Forces. According to a recent report published by Centre for Land Warfare Studies (CLAWS), despite being ranked fourth globally in Global Fire Power Index Rating, India lags behind sixty-six other countries when it comes to joint operations by its various services, making India dangerously ill-prepared for conflict in the cyber, special operations, and intelligence and information domains.

Crucially, as recent debates over the creation of integrated theatre commands have shown, the lack of jointness has impeded the modernization of the combat potential of the armed forces by pushing the services into unhealthy competition over funds. The integrated defense staff has started producing joint military doctrine—although it is a necessary step in coordinated defense planning, the doctrine is considered to be generalist, theoretical and army-centric in nature. In fact, the scope and impact of the integrated defense staff headquarters vis-à-vis the “babudom” (bureaucracy) of MoD itself remains unclear. Additionally, while India has recently decided to formulate tri-service agencies to handle domains in modern warfare, it is reflective of a wider silo-driven approach to jointness which—as Harsh V. Pant, professor of international relations at King’s College London points out—only makes these different bodies push their own agendas when it comes to threat perception and force management.

In order to deal with a world in which economic and trade issues are increasingly securitized, India needs confidence and clarity-of-purpose. It is clear that it requires institutional reforms at all levels of India’s foreign-defense apparatus, which will hopefully pave the way for coordinated, agile approaches toward global trends. India needs a strongman—or woman—who, while keeping India’s attractive democratic qualities intact, is able to take the powerful civilian bureaucracy head-on and cut through its elites’ confusion about India’s identity to formulate a clear Indian grand strategy. This would require a cleanup of its foreign policy and defense institutions: A Swachh Bharat Abhiyan (Clean India Movement) of another kind.

India will also need to continue building up the think tank and educational sectors, so as to provide that next generation of leaders. While New Delhi has seen a welcome growth in the number of think tanks and research centers, studies have shown that international relations as an academic discipline remains fairly underdeveloped in India: very few universities offer undergraduate programs in international relations, and there is a general lack of a well-knit national academic community and a vibrant international relations-related publishing culture. Therefore, the hesitance to discuss and debate foreign policy issues beyond Pakistan can be seen in the student body. Whatever the case, India can and will create the tools for its own grand strategy.

As India goes to polls next year, it must face a number of troubling questions: What kind of a power is it, and what kind of power is it willing to be?