What Liberal Hawks Get Wrong About Iran (and Cuba) 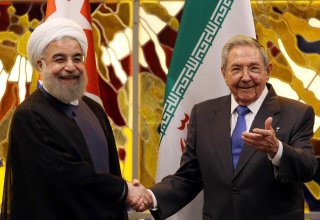 President Barack Obama took greater steps towards normalizing relations with Iran and Cuba than any U.S. president in decades. Obama supporters had promised that greater links with the United States would help liberalize both Iranian and Cuban societies.

Hawks fought tooth and nail to stop those connections from forming, arguing that regime change is the only solution. After the hawkish Trump administration took office, it worked to put Iran and Cuba under greater U.S. pressure than ever before. While the Biden administration has tried reducing tensions, it has shown little appetite for a major diplomatic opening.

Now a cohort of liberal hawks advertises itself as the middle path. Both naive diplomacy and aggressive isolation campaigns failed, they argue, leaving world-weary moderates to forge a more practical path. Economic sanctions will stay, but with “humanitarian” exemptions. The military pressure will continue, but in the form of “precision defensive strikes.” Regime change is still the goal, but it will come as a result of playing the long game.

None of these camps are willing to deal with Iran and Cuba as they are. Diplomacy cannot simply be a means to secure U.S. interests but has to bring the triumph of the American way of life. The hawkish liberal center, which prides itself on moderation and pragmatism, is often the most obsessed with ideological victory.

Tehran and Havana have given up their dreams of permanent global revolution. Washington has not.

One of the most articulate liberal hawks is Karim Sadjadpour, analyst at the Carnegie Endowment and expert on U.S.-Iranian relations. In a series of essays, he has argued that normalization with Iran is impossible because the Islamic Republic needs anti-Americanism to survive. Sadjadpour proposes a permanent cold war aimed at throwing the Iranian leadership off balance, which would open space for a liberal democratic revolution inside Iran.

In a recent New York Times article, Sadjadpour compared Iran’s Ali Khamenei to Cuba’s Castro brothers, as both sets of leaders wanted to rule their states “sequestered from international capitalism and civil society.”

“For Mr. Khamenei, the ideal position is just the right amount of isolation. Mr. Khamenei wants to be neither North Korea nor Dubai,” Sadjadpour writes. “He wants to be able to sell Iran’s oil on the global market without sanctions, but he doesn’t want Iran to be fully integrated in the global system.”

There is a much shorter phrase for what Sadjadpour describes: national sovereignty. Iran and Cuba’s leaders would like to deal with the world on a pragmatic basis, while maintaining their own systems of government. Nation-states are supposed to work this way.

Modern international relations are based on the Peace of Westphalia. Europe had suffered decades of religious warfare after the Protestant Reformation, so in 1648, major European powers agreed to a treaty based on the principle of cuius regio, eius religio. To each kingdom, its own religion.

States may be disgusted and horrified by each other’s values, but they can put aside those differences for the sake of peace and pragmatism. Catholic princes believed that Protestant kings were buying their people a one-way ticket to Hell; capitalist parties believe that communist parties are suffocating their people’s self-expression. All of them can conduct trade and diplomacy based on the principle of respecting each other’s borders.

U.S. special envoy Brian Hook was fond of claiming that Iran is not a “Westphalian” state but a “corrupt religious Mafia.” On the contrary, it is American leaders who have forgotten Westphalian principles. Washington does not really know how to accommodate countries who want to do business without importing a whole suite of American-style institutions or accepting a state of U.S. vassalage.

Iran and Cuba may once dreamed of spreading Islamism or Communism around the world in the same way. Three decades of U.S. superpower status—as well as isolation from neighboring states—have ended that vision.

Cuba now has normal relations with almost all capitalist states in the world, and some of the Islamic Republic’s closest allies are Islamophobic regimes. For that matter, theocratic Iran and secular Cuba are willing to cooperate with each other because of the common threats they face. Some may call this hypocrisy or ideological bankruptcy, but Americans could benefit from a little more flexibility in the way they deal with different societies.

Nationalism is the new name of the game. Iranian politicians try to blend Islamic symbols with references to pre-Islamic empires. A visitor to Havana is more likely to see portraits of the national poet José Martí than Karl Marx and Vladimir Lenin; the late Fidel Castro, who once tried to stamp out religion, eventually learned to embrace Afro-Cuban saints. “Regime hardliners” in Tehran and Havana speak in terms of independence and security, rather than spreading the banner of Islam and Marxism.

Of course, anti-Americanism is part of both states’ ideologies. That is because of the material threat that the United States poses to their sovereignty. One does not have to believe in Islamist morality or Marxist economic theory to wave the flag in the face of an outside enemy. In fact, those who oppose state ideology may still be swayed by the language of patriotic struggle and sacrifice.

“If — god forbid — a war begins, then I … a man who assumes no adjective but godless, will return to Iran to defend my motherland,” wrote the exiled Iranian musician Mohsen Namjoo in 2019.

When push came to shove, Tehran and Havana accepted Obama’s outreach. Iran traded away much of its nuclear program for sanctions relief, while Cuba welcomed American diplomats, businessmen, and tourists in droves. Although diplomacy did not resolve everything at once, Tehran and Havana opened up channels to talk about a variety of issues.

U.S. engagement also coincided with a period of reform in Cuba and Iran. However, diplomacy need not rely on that selling point. Diplomats’ job is to resolve international conflicts and pursue national interests without war. Whatever breathing room they open up for foreign reformers is just a pleasant side-effect.

America paid very little material cost for either opening. (Indeed, American business stood to profit from lifting sanctions and restoring trade relations.) But giving up on regime change was too high of an ideological price for many. Washington’s political class rallied against engagement, arguing the pace of reform in Iran and Cuba was too slow, or that diplomacy itself was a gift to dictators.

Obama’s successors clung to the hope that the Iranian and Cuban systems were on the verge of collapse, and that the people of both nations were just waiting on an American push to overthrow their rulers.

The actual results of maximum pressure have been mixed. While opposition to the state has grown in both Iran and Cuba, there is no immediate path to counter-revolution, and even Sadjadpour admits regime collapse in Iran is likely to take years.

Normalization ended up being one of the greatest missed opportunities of the twenty-first century. The United States could have begun patching things up with two bitter enemies from a position of relative strength. Instead, it has chosen to push Iran and Cuba deep into Russia and China’s orbit, just as those two superpowers begin to mount a real challenge to U.S. power.

However wasteful the conflict with Cuba is, Washington can probably afford to keep it going for a long time without feeling real pain. A state of permanent hostility with Iran is a much bigger problem. The Islamic Republic has projected military power across the Middle East, and may even become a global power by obtaining atomic weapons.

After all, a credible nuclear deterrent allows Moscow and Beijing to have their relationship with Washington. Everyone understands the insanity of trying to push “regime change”—that is, a civil war or leadership crisis—in a country with hydrogen bombs. And so, U.S. leaders have been able to accept Russia and China for what they are, and to deal with those states transactionally, even when there are deep disagreements.

American hawks can sometimes be mistaken for realists, because they are willing to deal with dictators in the name of containing Iran and Cuba. In fact, U.S. relationships with countries like Saudi Arabia are very ideological. It’s just that symbolic submission—accepting the supremacy of the American way of life—is more important than the practical application of democracy and human rights.

Goldberg and Wood spent little time discussing material questions about oil production, weapons sales, or regional security. Instead, they focused on how U.S. power can ensure “the changes in Saudi culture become irreversible.”

Matthew Petti is a 2022-2023 Fulbright fellow. He was previously a reporter for Responsible Statecraft and research assistant for the Quincy Institute. The views expressed here do not represent the views of the Fulbright Program, the U.S. Department of State, or any of its partner organizations.