What MLK’s Legacy Means For America 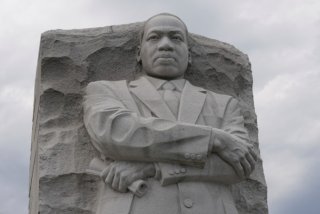 Today, Americans celebrate Martin Luther King, Jr. at a time when the world needs his words and dreams more than ever before.

On August 28, 1963, delivering the culminating speech of the largest mass protest in U.S. history, Martin Luther King, Jr., called on all his listeners to reflect on the legacy and promise from America. Speaking in the “symbolic shadow” of the most revered American of all, he climbed the steps of the Lincoln Memorial to remind his fellow Americans of the centennial year of emancipation.

King saw himself as continuing the work of those who had made possible the promise of the American nation—the founding fathers as well as Lincoln—those pioneers who dug “those great wells of democracy,” capturing “the best of the American dream.”

His “dream” of racial equality was “rooted in the American Dream.” King understood America’s promise. But he also understood the tragic realities facing American citizens, the unequal treatment once enshrined laws of the southern U.S. states. He understood the “fierce urgency” to extend America’s story to African Americans, a group who had been denied their inalienable rights.

In his “Letter from a Birmingham Jail,” King wrote: “...I am in Birmingham because injustice is there.” And there, in that cell, he wrote these prophetic words: “Injustice everywhere is a threat to justice everywhere. We are caught in an inescapable web of reciprocity, bound in a single garment of fate. Anything that affects someone directly, affects all of us indirectly.”

Perhaps King’s most powerful contribution is the doctrine of nonviolence, the idea that social change can be accomplished without the hate or violence of the French or Russian revolutions. He knew that he could accomplish vast change without unrest by directing the equally vast talents and hopes of the African American community, and reminding Americans about their own ideals. In doing so, he embraced the deepest moral commitment that unites us as peoples—a respect for human dignity.

King legitimized the expectation that each of us—regardless of skin color, gender, ethnicity, sexual identity, or economic means—has the right to be treated with dignity. Dignity requires mutual respect.

King called for a “fierce emergency” to address the indignities suffered daily by fellow citizens in the United States and elsewhere. From the steps of the Lincoln Memorial, he acknowledged the “resounding discords of the U.S. nation.”

You cannot improve yourself or your organization if you do not first believe that something better is possible. Not so long ago, millions of people were enslaved in America and civil war was fought to end this injustice. On a per-capita basis, it was the deadliest war in American history. In 1964, the idea of a black or woman president seemed like a fantasy. Now black men have occupied every elected or appointed national position and women have served in every capacity, except for the president of the United States. Perhaps even King did not dream that so much progress could happen in so few years. How many children who walked past segregated classrooms were alive to vote for Barack Obama?

Great leaders set out to achieve what others deem impossible. King, President Abraham Lincoln, each worked for a better, freer, and more equal world, partly because they could imagine it. The fight for racial, gender, and other forms of equality is not over, but to progress on this path we must believe that there is a destination.

Several decades later, King’s signature speech and overall career of eloquent activism must be considered a huge success. The “Dream” speech is a treasure of our rhetorical heritage, unrivaled among American speeches of the twentieth century.

Our duty to King’s legacy is to continue to follow his path of lasting justice, freedom, equality, and prosperity by using his work to advance society.

The United States must ensure to keep this heritage alive. When too much of the world is divided by color, creed, or class, and unjust rulers exploit these shallow differences for power and profit, American leadership is still necessary to inspire humanity toward King’s dream of equality, freedom, and justice.