What Is NATO Good For? 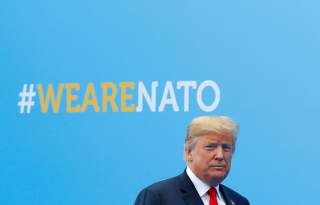 It is a transatlantic article of faith that NATO is “more relevant than ever” or at least “as relevant as ever.” Obviously, statements like these cannot be taken at face value. More relevant than when it was founded, at the end of the 1948–1949 Berlin airlift? More relevant than in the Cold War decades of the Hungarian (1956) and Czech (1968) revolutions? More relevant than during the Bosnian intervention of the early 1990s or in the aftermath of 9/11, the only time that NATO’s Article 5 provision of collective defense has ever been invoked?

As Donald Trump heads to Brussels for this week’s NATO summit, European leaders are desperate to convince him of NATO’s continuing relevance. And the truth is that NATO really is more relevant than ever—as long as you don’t count “collective defense” among NATO’s major missions. Collective defense without collective ability is meaningless, and as Trump repeatedly points out, Europeans don’t seem to be very serious about taking responsibility for their own defense, never mind maintaining the ability to support anyone else’s.

Leaving aside the United Kingdom, most western Europeans (and Canadians) seem to be much more keen on taking up NATO’s nonmilitary roles than any missions that might actually involve fighting. For example, NATO’s Women, Peace, and Security program is run by a Canadian. This program ensures “the integration of gender perspectives throughout NATO’s . . . essential core tasks.” Other NATO initiatives address worthy issues like disaster response, public health, and of course climate change.

Such activities are the epitome of twenty-first century postmodern relevance. But they won’t deter a Russian incursion in the Baltics or counter a resurgent Russian Black Sea fleet. Only the United States maintains the ability to counter such threats. That’s what makes insinuations that Donald Trump will betray NATO in exchange for a closer relationship with Russia’s Vladimir Putin as offensive as they are preposterous. Western Europeans seem to want the United States to care more about their defense than they do themselves.

Show Me the Money

Trump has taken a lot of flack for insisting that Europeans increase their defense spending to the mutually agreed minimum level of 2 percent of GDP. But if collective defense really were as important to Europeans as it used to be, European countries would be spending as much on defense as they used to spend. Back in 1973, when NATO first started benchmarking members’ levels of defense spending to the size of their economies, the United States spent 6.6 percent of GDP on defense. That was the tail end of the Vietnam war, but a time of relative peace in Europe. In a year that was the height of superpower detente, France spent 4.0 percent, Germany 3.9 percent, and Italy 3.3 percent of GDP on defense.

Fast forward to today, and in a supposedly much more precarious world France is spending 1.8 percent, Germany 1.2 percent, and Italy 1.1 percent. The United Kingdom is a European leader at 2.1 percent. Meanwhile in the United States, defense spending fell throughout the Obama years from 5.4 percent to 3.5 percent of GDP. Despite all the heated rhetoric from critics, this figure will hardly budge even if the Trump administration receives its full 2019 budget request of $717 billion. Defense spending is growing, but so is the economy.

If Europe really is such a dangerous place, why is Germany, Europe’s leading economy, spending only one-third as much of its GDP on defense as the United States—and one-third of the proportion it spent in the 1970s?

Germany’s skimping on defense has become the stuff of legends. Depending which dire report you read, Germany is only able to fly four or perhaps as many as thirty-nine of its 128 Eurofighter jets. On the ground, the Bundeswehr doesn’t have enough winter clothing to equip a rapid-reaction force and in exercises arms its troops with broomsticks instead of guns. Earlier this year a German tank brigade was only able to muster nine of the forty-four tanks required for a mission leading NATO’s “Very High Readiness” Joint Task Force. Perhaps it’s just as well that the menacing-sounding but broomstick-equipped Panzergrenadierbataillon 371 was recently rotated out of its role anchoring the NATO enhanced Forward Presence (eFP) battlegroup in Lithuania.

But don’t worry. Germany’s “hawkish” defense minister Ursula von der Leyen has a plan to increase Germany’s defense spending to 1.5 percent of GDP—by 2025. Not that her own government has agreed to this plan. Quite the contrary. Her party’s partners in the governing coalition have pledged to block it.

There is a part of Europe where America’s allies are meeting their NATO 2 percent spending commitments, or just about. The three Baltic states of Estonia, Latvia and Lithuania are all clustered at around 2 percent, with Estonia slightly in the lead at 2.1 percent. Poland comes in at 2.0 percent, Romania at 1.9 percent and Greece at 2.3 percent. These are not the richest countries in Europe; far from it. They are some of those least able to afford the luxury of collective defense. The lesson is that they are spending on their own defense.

It makes sense to continue working through NATO on noncombat missions like gender equality, disaster preparedness and environmental conservation. But Poland and Romania are likely to emerge as more reliable security partners than Germany and Italy. A future force disposition that sees a British brigade in the Baltics and American brigades in Poland and Romania would be more likely to deter Russian aggression than the current concentration of British and American troops in Germany.

The way things are going, NATO is already evolving into more of a broad security organization than an effective military alliance. An alliance requires allies, and most of NATO members no longer maintain any effective ability to fight a war. France has some ability to operate in Africa, and Italy in the Mediterranean, but such forces are maintained for their countries’ own purposes. They are not positioned for European collective defense.

Western Europe no longer needs the United States to defend it, so why maintain the charade that it does? It’s eastern Europeans who truly value the American alliance implicit in NATO. Direct security cooperation with the countries of eastern Europe through a European “hub and spokes” system would more efficiently reflect strategic realities than the current commitment to collective defense, without undermining NATO’s worthy postmodern missions. God helps those who help themselves, and in a world of scarce resources, so should the United States.

Image: U.S. President Donald Trump walks at the start of a NATO summit at the Alliance’s headquarters in Brussels, Belgium July 11, 2018. REUTERS/Paul Hanna