What the Navalny Arrest Means for Russia and the West 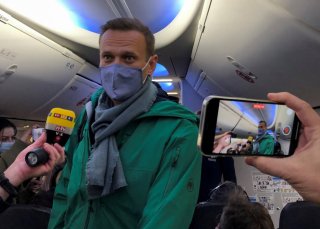 With the arrest of leading Russian opposition figure Alexei Navalny, the stage has been set for a new flashpoint in the turbulent relationship between Russia and the West. Navalny’s jailing has been greeted with a chorus of indignation abroad. The New York Times editorial page lauded the “extraordinary courage of Aleksei Navalny.” Ursula von der Leyen, the president of the European Commission, stated that Russian authorities must “immediately release him and ensure his safety.” And incoming Biden national security advisor Jake Sullivan deemed the detention “an affront to the Russian people.”

But the more the West demands an immediate release, the more Russian president Vladimir Putin is likely to crackdown. The Kremlin, which has already moved to restrict individuals and organizations by broadening a “foreign agent” law, is now moving directly against Navalny. In the power struggle taking place between him and Navalny, Putin for now has the upper hand. Clearly, though, Navalny is challenging his authority and increasingly chipping away at Putin’s legitimacy.

Navalny was detained by police at passport control after landing at Moscow’s Sheremetyevo airport earlier this week. Following a court hearing at a police station on the outskirts of Moscow, Navalny’s detention was extended until February 15. He is set to receive an initial court hearing on February 2. Citing a report by the British medical journal Lancet into Navalny’s reported poisoning and recovery, Russian authorities charged Navalny with violating his terms of probation relating to a 2014 money laundering case: “Based on the [Lancet] publication, A.A. Navalny was discharged from the Charite Clinic on September 20, 2020, and by October 12 all of the symptoms of his illness have passed,” read a statement by Russia’s Federal Penitentiary Service. “Thus, the conditionally convicted person is not fulfilling the obligations assigned to him by the court and is evading the control of the penal inspection [service].” Russian authorities ordered Navalny on December 28 to appear at a penal control facility in Moscow by the morning of December 29; Navalny’s team countered that he was still convalescing from his alleged poisoning and in no condition to travel safely.

Navalny has long denied the validity of all the criminal charges arrayed against him, dismissing his several previous convictions as politically motivated. “Everyone is asking me if I’m scared. I am not afraid,” he told reporters prior to his arrest on January 17. “I feel completely fine walking towards the border control. I know that I will leave and go home because I’m right and all the criminal cases against me are fabricated.” Still, it appears unlikely that Navalny failed to realize he could be detained for his earlier failure to report for a mandated probation check-in.

On the contrary, he was seeking to heighten his confrontation with Putin by returning to Russia. The political fallout from this recent twist in the long-running Navalny affair is not insubstantial. On the eve of the inauguration of President-elect Joe Biden, Navalny’s arrest hands a fresh crisis to the incoming president—one, who, in contrast to President Trump, has distinguished himself in recent years as a committed Russia hawk. Navalny’s ongoing detention and future trial are all but guaranteed to become a febrile breeding ground for protests, inviting a potential government crackdown which, in turn, will facilitate the Biden administration’s plans to corral a united Western front in firm opposition to Moscow. Indeed, Navalny has called for a nationwide protest on Saturday, urging Russians to “take to the streets.” There is little doubt that a number of his supporters will show up, but just how many is an open question.

For Russia, the geopolitical context is unmistakable. Foreign Minister Sergey Lavrov is dismissing Western complaints as sheer hypocrisy: “We saw how they latched onto yesterday’s news of Navalny’s return to Russia. You can feel how glad they are to copy the same statements. They are glad because it seems that this makes Western politicians think that in this way, they can distract from the deepest crisis that the liberal model of development finds itself in.”

But Putin’s latest move does hand the new administration in Washington a powerful pretext for further punitive measures and complicates an already-frayed relationship with Berlin. Yet the Kremlin’s hands were tied. Navalny has consistently sought to embarrass and expose the government’s corruption and question its legitimacy. Navalny alleged that Russia’s elite Federal Security Service (FSB) toxins team attempted to murder him with the use of the lethal nerve agent Novichok. In the following week, Navalny released what he stated was a phone conversation between him and one of the purported FSB assassins where he was impersonating a senior national security official, humiliating the Kremlin in the process. The Kremlin, up to and including Putin, has consistently denied any part in the alleged attempt on Navalny’s life. “There is actually nothing surprising about the fact that these implanted stories are taking place. They have always been and will always be,” said Putin at a December 2020 press conference. Faced with growing pressure from prominent Russian politicians and media voices, the government appears to have felt that it had little choice but to make good on its threats to enforce its stated probation laws against Navalny.

Navalny’s arrest could serve as a further impetus for a fresh U.S. sanctions package against Moscow early into Joe Biden’s presidency, a prospect that enjoys steady bipartisan support in the Senate. It may also lend momentum to ongoing American efforts to halt the construction of the Nord Stream 2 gas pipeline between Russia and Germany, which seems to be increasingly fragile.

Yet overt Western threats in the Navalny affair risk having a paradoxical effect on Russian civil society: with every subsequent demand from Brussels or Washington, leniency on Navalny is further tarred with the politically toxic brush of Western appeasement. The result is a kind of negative feedback loop that actually stymies the growth of a vibrant opposition culture. The West has a dilemma in dealing with the Russian government. Sanctions and other forms of punishment that have considerable costs to Russian prestige and even more so to the economy also seem to unify the Russian people in their antipathy to the West and strengthen Putin’s determination not to surrender under pressure. Traditionally, in Russia, there is nothing more damaging to a government’s legitimacy than to show weakness. Dealing with Russia requires both firmness and finesse.