What Next for Trump? 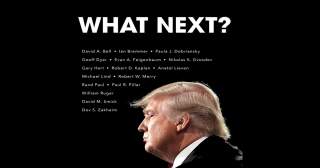 Michael Lind: “Trump Needs His Own Army of Experts”

Geoff Dyer: "The Time for 'Strategic Patience' Is Over. Donald Trump Must Confront North Korea.​"

Anatol Lieven: "How the President-elect Can Trump Foreign Policy Idealism"

WHEN BRITISH prime minister Harold Macmillan was asked what he feared most, he replied, “Events, dear boy, events.” This special issue begins with a symposium to assess what the most significant national-security challenge might be for the incoming Trump administration. It then moves to a series of longer essays that examine American relations with Russia, China, Europe and the Middle East, followed by conceptual analyses of international economics, counterterrorism, democracy, grand strategy and the National Security Council.

The specific answers may vary, but they revolve, more or less, around the same fulcrum that has inspired the National Interest for three decades: What constitutes foreign-policy realism? When should the United States intervene abroad and when should it refrain? Should it seek to cultivate warmer relations with China and Russia, or are they revisionist powers that need to be confronted? Is free trade a good thing—or does it undermine American fiscal might?

With the election of Donald Trump, these questions have acquired great prominence. But they are actually not all that new. In the 1890s, when William McKinley embraced imperialism and Theodore Roosevelt declared that Americans had to break out of their “fossilized isolation” and take up their “mighty mission,” controversies raged about whether or not the United States was betraying its heritage. After World War II, leading realist thinkers such as Walter Lippmann envisioned a pragmatic political settlement over Europe with the Kremlin. In his 1947 book The Cold War, Lippmann rejected the notion that diplomacy was inutile and ideological confrontation unavoidable: “There would be little for diplomats to do if the world consisted of partners, enjoying political intimacy, and responding to common appeals.”

In this issue, Graham T. Allison and Dimitri K. Simes warn that the United States and Russia “face a serious risk of stumbling into a war neither side wants.” They urge the president-elect to make the case for realistic engagement directly to the American people. When it comes to China, Evan A. Feigenbaum observes that the long-standing consensus in Washington is eroding, but it isn’t inevitable that the United States is headed for a “more adversarial relationship.” Zalmay Khalilzad contends that Trump is well positioned to establish a new bipartisan foreign policy: “The opportunity is there. I hope he seizes it.” At the same time, Richard Burt emphasizes Europe’s strategic utility: “There is perhaps no more effective and efficient way for Washington to project strength than from the platform of a robust and united NATO alliance.” Sen. Rand Paul, meanwhile, asserts that it is imperative for Congress to reclaim the war powers that he believes it has surrendered to a succession of presidents.

In publishing these essays, our aspiration is to show that what is truly in the national interest is also in the National Interest.