What North Korea's Most Recent Missile Launch Means for America 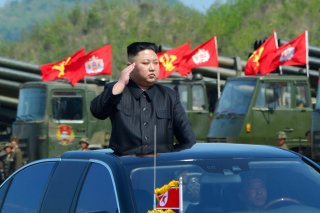 Harry Kazianis recently wrote an article how Donald Trump should push back against North Korea. An excerpt of the article can be found below:

North Korea has once again challenged the international community, test firing what Pyongyang is claiming is an intercontinental ballistic missile, or ICBM, capable of hitting the U.S. homeland with an atomic payload.

Maybe. What isn’t in dispute is that the Trump administration is in quite the bind when it comes to how to deal with the so-called “hermit kingdom”.

We do know one thing for certain—we won’t see B-2 bombers launching a decapitation strike on Kim Jong-un anytime soon or a Gulf War One bombing campaign against the north.

The challenge is simple: miss one nuclear warhead and Pyongyang will fire its remaining nuke along with its deadly arsenal of chemical and biological weapons towards South Korea, Japan or U.S. bases in the Asia-Pacific. World War III here we come—and no one is going to risk that.

So what does the Trump Administration do?

If we take the long-view, Washington does have options to rein in dictator Kim. I would offer five things right now we can do to not only stabilize the status-quo, but begin to contain Pyongyang until it realizes its current actions are counter to its own interests.

First, it’s time to make sure no Americans travel to North Korea on vacation, student trips or even at this point on a humanitarian mission. We can’t allow Pyongyang to use our own citizens as weapons against us. Period.

Second, we need to step up sanctions on the regime and isolate it from the outside world as much as possible. Contrary to popular believe, North Korea is not as isolated economically from its neighbors and the world economy as it should be—just watch Kim get into his Mercedes as possibly the ultimate proof. Sanctions need to make sure no luxury goods get into this roguest of rogue states, but also anyone who dares help North Korea build nuclear weapons or the missiles to carry them needs to be named, shamed and made an international outcast, plain and simple.

Third, since military options will only make the situation worse, we need to use all non-kinetic options to slow the pace and speed with which Pyongyang can build out its weapons of mass destruction arsenal. While reports in the New York Times and other outlets point to this already happening, we need to ensure such efforts are being ratcheted up as much as possible. While such an option will not be easy to implement—North Korea isn’t exactly running Windows 10 or using Apple computers but many times a total smorgasbord of systems—we need to ensure we can employ the vast range of cyber weapons we currently have to slow Kim’s progress. Giving Washington and its allies more time to deal with this threat is obviously a good thing.

Fourth, it’s long past time to put pressure on China to rein in North Korea—words or token actions won’t cut it anymore. While the Trump administration needs to make it clear to President Xi that we don’t seek Beijing’s help in actions that would completely destabilize the regime—like withholding food or fuel supplies—China can play a role in making sure North Korea stops testing nuclear or missile technologies that threaten the region and the U.S. homeland. If Beijing refuses, Washington will simply have no other choice but to begin pursuing its own interests in a much more aggressive way—and that means getting much tougher in the East and South China Seas, over Taiwan and on trade.

And finally, America must get serious about rebuilding its military with a greater emphasis on missile defense. While hitting a bullet with a bullet is certainly challenging, as part of a larger strategy to contain Pyongyang, it could be a very useful tool to negate some of the offensive capabilities the north is developing.

While North Korea is clearly the problem from hell, the Trump administration thankfully does have options for dealing with this challenge. And as last night missile test shows, now is the time for action.