What Obama Should Tell the EU on Refugees 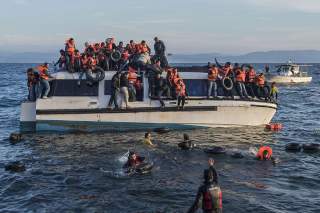 At the Leader’s Summit on Refugees in September, President Obama urged governments to do more to help the 65 million refugees and displaced people around the world today—the largest number of people driven from their homes by war and conflict since World War II. “History will judge us harshly if we do not rise to this moment,” Obama said at the September summit.

Two months later, as President Obama prepares to visit Greece and Germany, it is clear that countries of the European Union, the world’s richest economic bloc, have not risen to meet this critical challenge. Thousands of asylum-seekers are still stranded in shocking conditions in Greece and a record 4,233 people have died or gone missing trying to cross the Mediterranean so far this year. The plight of these refugees, asylum-seekers, and migrants should be high on the agenda when Obama meets with the German and Greek leaders.

It has been more than seven months since the EU and Turkey agreement entered into force, a controversial agreement established to stem the flow of asylum-seekers and migrants into Europe via Greece. EU leaders have celebrated the agreement as a success, pointing to the significant fall in the number of arrivals: 211,663 people arrived by sea to Greece in October 2015; in October 2016, the numbers dropped to 2,970. But for the men, women and children stranded in cold, unsafe, and unsanitary camps around Greece, Europe has failed spectacularly in dealing with this situation in a humane way.

In April, the European Union provided international organizations working in Greece—including UNHCR, the UN refugee agency, and the International Federation of the Red Cross—with 83 million euros to improve the living conditions of refugees, asylum-seekers, and migrants. The EU announced a further EUR 115 million disbursement in September. The contrast between these amounts and the reality on the ground is alarming.

During a recent mission to Europe, I visited some of the camps on Greece’s mainland and on the islands of Lesvos and Chios. I saw first-hand the appalling conditions in which thousands of refugees, migrants and asylum-seekers are living. In many camps, people sleep in tents, exposed to the cold, rain, and the humidity. In the Petra camp near Mount Olympus, where more than 1 thousand Yazidis have been living for months—people who fled the horrors and trauma of ISIS in Iraq—I spoke with a young woman who told me she is traumatized in new ways by the poor conditions in the camp, where the cold is already biting. The young mother added that she is scared that her three-month-old daughter will choke on smoke in their tent or be attacked by insects.

In a camp on the island of Chios, two Syrian mothers, who are caring alone for three children each, told me they live in constant fear. Potential violence, alcoholism, thefts, and the fear of fires, like the one that recently broke out in the camp, are their daily reality. They said that at night, they put diapers on all their children—ages one-and-a-half through six—because it is too dangerous to leave their rooms to take them to the bathroom.

The insecurity and conditions of the camps in Greece beg the question: where is all the EU money being spent and what is the EU doing to ensure its funding translates into real refuge and protection?

What’s more, far from putting the human smugglers out of business—the stated goal of the EU-Turkey agreement—the current situation has forced asylum-seekers and migrants to seek new options since borders remain closed and safe and legal pathways toward refuge and protection are blocked for many. Outside the Moria camp in Lesvos, a young man from Iraq said to me, “Our only hope is money.” With money, he said, a smuggler can provide a number of possible pathways to move across Europe.

In 2015, EU countries committed to take in and process 160 thousand asylum-seekers from Greece and Italy by September of 2017. Some countries such as Hungary have refused, and the United Kingdom has opted out. As of November 4, only 5,343 asylum-seekers had been relocated from Greece to other countries under this scheme. EU countries should urgently step up their pledges and provide other options for people who are not eligible, such as Afghans and Iraqis. Another option is family reunification: many of the people currently in Greece have family members in other EU countries. Processing their claims promptly and enabling them to join their loved ones is an obvious solution for many of these people.

From Brexit to the rise of far right parties and the divisions within the EU itself, the European Union faces significant challenges on multiple fronts. However, Europe’s governments have a responsibility to solve the refugees and migrant crisis in line with their international obligations. And they have the moral responsibility to treat refugees, asylum-seekers and migrants with dignity and humanity. People who have fled for their lives from war, violence, or persecution should not be paying the price for Europe’s failures.

Izza Leghtas is the Senior Advocate for Europe at Refugees International. She traveled to refugee camps in Greece in October. Her Twitter handle is @IzzaLeghtas.