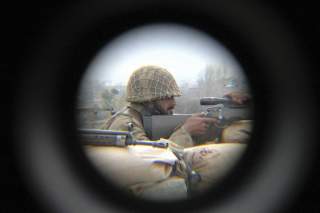 President Ashraf Ghani has announced Kabul’s willingness to recognize the Afghan Taliban as a legitimate political party if they accept a cease-fire and the rule of law. He has also pledged to start a new chapter in relations with Pakistan. Pakistan has welcomed the offer, and said it is ready to facilitate talks between the Afghan government and the Taliban.

Yet some important pieces of the puzzle are missing. For both the Taliban and Pakistan, where the United States stands is more important than what Ghani is offering. The Taliban are opposed to the presence of foreign forces in Afghanistan, and would rather talk with Washington than Kabul. And the U.S.-Pakistan relationship remains out of alignment with the prospects of peace and stability in Afghanistan.

The U.S.-Pakistan relationship was troubled long before President Trump's New Year’s Day tweet that accused Pakistan of “lying and deceit.” Problems between the two countries are long-standing, and neither occupies the moral high ground in the eyes of the other: the United States regards Pakistan as a two-faced ally, while Pakistanis have long dwelled on the recurring pattern of America’s betrayal and abandonment.

Pakistan has a lot to answer for. It has lived dangerously for decades. Its liaison with militant organizations and the Afghan Taliban has served a foreign policy that has produced internal security challenges and friction with the United States.

But to define Pakistan only by its failures does not tell the whole story. Pakistan, to the extent permissible by its national interests, has also provided valuable cooperation in support of U.S. regional policies. And even if Pakistan’s policies were ill considered, that should not delegitimize its interests.

U.S. foreign policy has always faced a dilemma in dealing with Pakistan. Washington does not see clear, long-term strategic interests in Pakistan, but has found its services valuable in meeting specific and sporadic geopolitical and security challenges.

The two countries never had a strategic convergence during their alliance. Their interests often differed—and when their interests converged, their policies differed. The relationship thus brought harm, along with benefits, to both sides.

“The Weight of Contradictions”

National Security Adviser H. R. McMaster said in a Voice of America interview in January that the U.S. relationship with Pakistan “can no longer bear the weight of contradictions.” In the context of President Trump’s tweet, he was obviously referring to Pakistan’s behavior—but the reality is that these contradictions are on both sides.

From the late 1950s until the mid-1960s, the two countries were allied in advancing Washington’s containment policy against Moscow. Pakistan received substantial economic and security assistance, which helped stabilize the fledgling country as it struggled for survival. But the U.S. relationship with India suffered, and Pakistan’s democratic process was marred by its army, strengthened by the United States. In the 1980s, Pakistan helped the United States defeat the Soviets in Afghanistan, hastening the collapse of the Soviet Union. But, under the umbrella of this cooperation, Pakistan went on to complete its nuclear program, in breach of U.S. nonproliferation objectives.

Since 9/11, Pakistan has provided valuable cooperation in the war on terrorism, including critical logistics support to the war effort in Afghanistan. But Taliban sanctuaries in Pakistan have complicated that effort. And the war’s blowback has brought enormous harm to Pakistan’s security, economy and stability. Washington is understandably angry about American soldiers coming under attack by the Haqqani network, which is said to be based in Pakistan. Pakistan, for its part, feels hurt by the death of nearly seven thousand of its security personnel at the hands of terrorists, in retaliation for the Pakistani army’s support for what they see as America’s war in Afghanistan.

The Afghan War and U.S.-Pakistan Relations

It is never easy to manage a war-centric relationship, especially when the war has not been going well. This is what has happened to U.S.-Pakistan relations. There are many stakeholders in the war, and each has failed to varying degrees. No leaders in the White House or Congress have been capable or willing to fix the war, so the easier thing to do is use Pakistan as a lightning rod. Pakistan is made out to be the sole cause of the war’s failure—an explanation that satisfies all those involved.

Yet public humiliation, ultimatums and the suspension of aid are playing into Pakistan’s anti-Americanism, making resistance to Washington’s pressure an act of nationalism. Washington’s invitation for India to play an enhanced role in Afghanistan (where, according to Islamabad, India is already waging a proxy war against Pakistan of terrorism and subversion) only exaggerates Pakistan’s insecurities, validating its inaction against jihadists and the Afghan Taliban. Added to this is the Indian campaign to isolate Pakistan, which Pakistan blames on Washington’s acquiescence, if not incitement. Anti-Indian and anti-American sentiment, therefore, end up reinforcing each other, as the United States pushes all the wrong buttons in Pakistan, ringing alarm bells.

Pakistan’s tentative and fragile efforts to curb extremism and act against militant organizations thus come under assault from both Washington’s troubling policies and Pakistan’s internal sources: weak governance, a political leadership fearful of Islamist groups and a military worried about India.

The way the United States is treating Pakistan is not the way to resolve policy dilemmas with a country whose role, one way or the other, will be consequential to many areas of U.S. interests, including the security and stabilization of Afghanistan, the safety and security of nuclear weapons, the prevention of a nuclear war and the fight against transnational terrorists like ISIS, not to mention dealing with the lengthening shadows of China and Russia.

Is it a wise policy to hold an important relationship, whatever its flaws and contradictions, hostage to a war for which there is still no clear strategy and whose failure cannot be assigned to a single factor or actor? Yes, the Taliban had sanctuaries in Pakistan, and probably continue to enjoy safe haven there—and this, no doubt, ended up affecting America’s war effort—but America’s war effort was already doomed.

Not only did the U.S. military campaign in Afghanistan lack a political strategy, but in the rush to war there was little effort to comprehend the nature of the threat or the enemy. Along with the lack of a strategic imperative, incoherent war aims, insufficient resources and poor execution, the war effort was also undermined by a shift in attention and resources to another war of doubtful necessity.

The war did not start failing because of the Taliban’s resurgence; rather, the Taliban were resurgent because of the war’s failure. Pakistan, then fearing yet another American departure, started banking on the Taliban as a hedge if Afghanistan descended into chaos again. Pakistan feared a replay of 1990, when the United States walked away from the region as if the Afghan jihad had never happened, leaving behind a broken Afghanistan, a restive jihad, a new breed of military adventurers and Islamic revolutionaries, and an embittered and increasingly Islamic Pakistan, abandoned and sanctioned. The consequences are well known, and include the rise of the Taliban.

The Trump strategy is like a two-act play. The playwright wrote Act One, and now, without having written Act Two, the curtains have been drawn and the play is being performed. The United States is talking of a negotiated settlement, but this remains a backup plan. The preferred plan’s goal is the military option. This is clear from the expanded military operations and from the administration’s rhetoric, which consistently refers to the Taliban and the Haqqani network as terrorists.

The talk of a negotiated solution is essentially a face-saving strategy in case the military solution (Act One) fails. And it is likely to fail. If it succeeds, it would be costly. Pakistan shares the U.S. objective of stabilizing Afghanistan, but feels that U.S. strategy will not succeed and may backfire—and end up destabilizing Pakistan. Pakistan does not want the Taliban to come back to power, but it does not want to leave them disempowered either. If the Taliban do not get what they want in Afghanistan, they will go after Pakistan and tear away at least a part of it.

The Taliban Must Be Defeated

The Taliban can and should be defeated—but not by U.S. unilateral action. The United States cannot defeat the Taliban, if indeed this is the objective, without Pakistan joining the war. But Pakistan will not join the war. Neither can a negotiated settlement take place without Pakistan. And Pakistan will not join a negotiated settlement if America’s position towards it remains unfriendly, if not hostile, and if Pakistan’s concerns about India’s role in Afghanistan are not satisfied. That is the bottom line.