What President Obama Must Tell Israel Before January 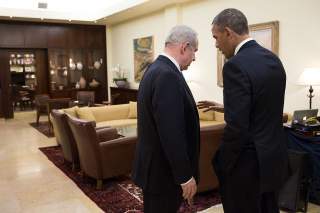 There has been much speculation during the electoral campaign season whether there is still something President Obama could do before the end of his term to change the course of the Israel-Palestine conflict. Most of this speculation has focused on the possibility President Obama would finally support a UN Security Council resolution that spells out terms of reference for a two-state agreement, ending Israel’s occupation of the West Bank.

The critical moment of decision for such a presidential intervention is now, as Israel is about to cross a line with its illegal settlement project that permanently precludes a two-state solution, having transferred over six hundred thousand Israeli Jewish settlers beyond the pre-1967 Green Line, Israel’s internationally recognized border. Having lost their struggle for self-determination and separate statehood, Palestinians may decide to launch a new popular struggle for citizenship and equal rights in the de facto Greater Israel that has been imposed on them.

Yet it is precisely this impending loss of the option of separate Palestinian statehood that may have opened an opportunity for a two-state agreement that did not exist until now. It is that opportunity, not a return to futile negotiations, that a final Middle East peace initiative by President Obama should focus on.

U.S. and international Middle East peace diplomacy failed catastrophically because it never addressed the only real obstacle to a two-state solution: the vast and unbridgeable power gap that always existed between Israel and the Palestinians, an imbalance that led Israel’s leaders to the strategic rejection of Palestinian statehood. They decided that since they could have it all, they would have it all, the UN Partition resolution’s division of Palestine notwithstanding. And the path chosen by Israel for the achievement of this goal is its colonial settlement project, which the United States pretended is an unintended obstacle that could be overcome by the good will its diplomacy and generosity to Israel would generate.

What was actually needed to change Israel’s cost/benefit calculations for its permanent disenfranchisement and displacement of the Palestinians was the bridging of this vast power gap through outside intervention. With the Likud and other even more reactionary political parties in power, there was no chance for such change coming from within. But instead of exercising its leverage, U.S. diplomacy granted Israel virtual impunity by opposing all such efforts from the outside. The notion that President Obama would now allow such outside intervention, or initiate it himself, is entirely fanciful.

But the impending permanent loss of statehood for the Palestinians is exposing and bringing into far sharper focus an apartheid—not its threat but its current de facto reality—that is obliterating Israel’s democracy. President Obama, in his speech at last September’s session of the UN General Assembly, warned that Israel “cannot permanently occupy and settle Palestinian lands,” implying that with the option of Palestinian statehood denied by Israel, the United States could not conceivably fail to support a Palestinian demand for citizenship and equal rights.

If there is one price the overwhelming majority of Israel’s Jews will not pay for a Greater Israel, it is the loss of their state’s Jewish identity. This has been repeatedly confirmed by successive Israeli polls. Most Israelis are fully prepared to pay the price of condemnatory rhetoric from the international community, as long as the United States continues to have Israel’s back. They believe this will continue to be the case because the illusion that the occupation will be resolved when some future Palestinian generation will produce “partners for peace” acceptable to Israel—an illusion concocted by Netanyahu for American consumption—can be successfully maintained. They believe this because that’s what they have heard from America’s leaders, who even when warning Israelis they are on the path to apartheid assured them that “no daylight will ever come between us.”

The most transformative message President Obama could convey to Israelis—because I believe he truly cares about Israel’s future more than any of his predecessors, even as he finds their current leader contemptible—is that their complacent assumptions about the sustainability of the status quo are entirely unjustified, for no future U.S. administration can allow America to be complicit in the permanent disenfranchisement of the Palestinian people and in facilitating apartheid. An Israel that abandons the shared values that are the foundation of the unprecedented relationship between the two countries abandons that alliance.

Such a warning to Israel would also be an important message to a younger generation of Palestinians that if they engage Israel in a nonviolent popular struggle for their rights, they can count on America’s support. The readiness of this younger generation to undertake such a struggle, as confirmed in several recent studies, gives the lie to the belief of many Israelis that Palestinians would not risk losing what pathetic benefits the occupation now offers them via the Palestinian Authority, an institution that increasingly serves as a handmaiden to the occupiers.

When these consequences of Israel’s “success” in achieving the irreversibility of its settlement project register with Israel’s Jewish public, it is entirely possible it will reconsider the cost/benefit calculations for the Greater Israel it aspired to. For Palestinians would have leveraged their demographic advantage to bridge the gap between them and Israel, a leverage that Israel’s vastly superior ability to wield violence and America’s political cowardice have denied them until now.

But if Israel’s Jewish population continues to value territory over peace and over justice and perseveres in its denial of Palestinian statehood, it will have to come to terms with the inescapable adjustment of its Jewish religious, cultural and national identity it will have to make to accommodate the religious, cultural and national identity of a majority Arab population. Given the assaults Netanyahu’s government has of late been making on Israel’s shaky democracy in the name of the state’s Jewish identity, this might well be the best possible outcome.

Henry Siegman is President Emeritus of the U.S./Middle East Project. He is a former senior fellow on the Middle East at the Council on Foreign Relations and formerly headed the American Jewish Congress and the Synagogue Council of America.