What Price Will the Conservative Community Pay to Capitalize on the Era of Trump? 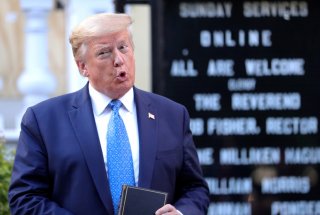 In the 1990s, I was referred to as the “guru of the communitarian movement,” although quite a few others deserved this title at least as much. I have hence been paying special attention to the sudden rise of a communitarian faction in the Republican party, led by Senators Marco Rubio (R-Fla.), Tom Cotton (R-AR), and Mitt Romney (R-Utah), as well as Oren Cass and his organization, American Compass. The faction’s ideas—its rejection of the hyper-individualism of the libertarian ideology (which has captured much of the GOP), its concern for the common good, and its recognition that the government has a major positive role to play—are much-validated by the pandemic. Although not all the positions of the faction are aligned with communitarianism, there are many points of overlap. At the same time, claims that the motives of the faction are purely political, that it merely seeks a post-Trump populism, are misplaced. Politicians can spot trends and amplify them.

The nation seems to increasingly recognize that dealing with the coronavirus and its economic effects requires both a greater commitment to the common good (for instance by wearing masks which mainly protect others, not oneself) and less obsession with short-term profit. Rubio is leading the new, Republican communitarian parade; thus, his texts are of special interest to those seeking to learn more about one of the few heartening developments in the toxic world we inhabit.

In “The Case for Common-Good Capitalism,” published in November 2019, Rubio put it well when he states that we must stop “priz[ing] economic efficiency over resiliency, financial gains over Main Street investment, [and] individual enrichment over the common good.” He argues that businesses should treat workers and the community—and not only investors—as partners, a stakeholder theory advanced by Tony Blair. (It is an idea endorsed by the Business Roundtable, as 172 CEOs signed a “Statement on the Purpose of a Corporation,” in which they promise to “deliver value to all” stakeholders, in order to promote “the future success of our companies, our communities, and our country.”) In a different article, Rubio adds, “On the political right, we have become defenders of the right of businesses to make a profit, the right of shareholders to receive a return on their investment . . . But . . . we have neglected . . . the obligation of businesses to act in the best interest of the workers and the country that have made their success possible.”

Debates between conservatives and liberals often focus on the relative role of the government versus the market. Communitarians stress the importance of the third sector—community. This position is reflected in Rubio’s writing, in which he connects the exclusive focus on making money and efficiency to “a collapse in churchgoing and community institutions; a decline in marriage, childbirth, and life expectancy.” In “The Return of Conservative Economics,” Oren Cass states that his new organization, American Compass, “will insist on recognizing the importance of non-market labor performed within the household and community.” The organization’s website declares its mission: “To restore an economic consensus that emphasizes the importance of family, community, and industry to the nation’s liberty and prosperity.”

Sen. Josh Hawley (R-Mo.) expresses this position in terms that would do credit to any communitarian academic when he states that, in the United States, “public philosophy says liberty is all about choosing your own ends. That turns out to be a philosophy for the privileged. For everybody else, for those who can’t build an identity around the things they buy, for those whose life is anchored in family and home and nation, for those who actually want to participate in our democracy, today’s [philosophy] robs them of the liberty that is rightfully theirs.”

Finally, the new faction recognizes that the government is not the problem, but part of the solution, and it has a major role to play in serving the common good (as distinct from a liberal position that would focus more on using the government for a reallocation of wealth.) Cotton, who made several troubling statements about the pandemic and is a super hawk as far as China is concerned, is considered part of this communitarian faction. Cotton wrote that “[o]ur government at every level has to take responsibility for caring for our people and caring for their health and their material well-being as well.” Romney called for essential workers to receive “Patriot Pay,” a three-month raise of as much as $12 an hour (depending on annualized income, with a yearly $90,000 income set as the upper limit on eligibility). Although David Brooks, a conservative writer, is not associated with this faction, every second column he writes is communitarian gold and could be used as their text.

Beyond large emergency government outlays, Cass calls for adding environmental and employment regulations to “address externalities where the market outcome is not the efficient one and also intervene where economically efficient activities may have consequences that frustrate equally valid but non-economic goals.” He favors more antitrust enforcement and a measure of protectionism in order to safeguard American workers and communities.

Some of the policies championed by the communitarian faction of the Republican party merit particularly critical examination. The faction calls for the government to ensure that many products are manufactured in the United States and not imported, in an effort to simultaneously reduce the U.S. reliance on China and to protect American workers. True, many nations have long ensured that some items, such as the food supply, are locally-produced. And one may well be able to defend policies that ensure that Americans can produce the medical supplies the nation needs in a crisis. Also, fair-trade policies, which ensure that competition occurs on an even level, have an important place. However, one must ensure that such policies do not end up leading to widespread protectionism, which greatly increases the costs of consumer products and renders the whole economy much less efficient.

These are not more than the proverbial straws in the wind. However, they may tell us about a change in the direction the wind is blowing, one of the few hopeful signs for those of who came to view the GOP as merely a tool of Trump—and a silver lining in the coronavirus’s dark clouds. And even after these clouds disperse, columnist Zachary Karabell may prove right in his prediction that “ it will be hard to put that communitarian genie back in a free-market, libertarian bottle.”