This Is What Putin Really Wants 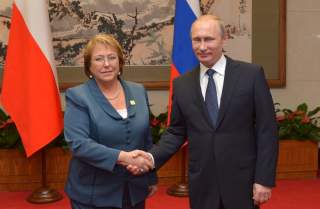 At a news conference in Budapest on February 17, Russian president Vladimir Putin engaged in one of his favorite pastimes: sparring with journalists. One reporter asked if Putin thought the newly brokered ceasefire in Ukraine’s Donbas region would hold. If not, what would Russia do if the United States sent weapons to the Ukrainian army? “Arms supplies are already taking place,” Putin asserted. Then, in a manner more suited to sports commentary than diplomacy, Putin declared that, in any case, the military game was already over in the Donbas. Kyiv (and by implication, the United States) had been beaten, by a rag tag rebel team of miners and farmers. “It is never easy to lose of course and is always a misfortune for the losing side, especially when you lose to people who were yesterday working down in the mines or driving tractors. But life is life, and it has to continue. I don’t think we should get too obsessed about these things,” said Putin. With these flippant remarks, Putin depicted the Ukrainian military defeat as a round in a much bigger tournament where everyone is a bit player in Russia’s competition to call the shots in its neighborhood. Right now Putin thinks he is on a winning streak.

(Recommended: Does Putin Want a War?)

In Ukraine, and in his whistle-stop trip to Hungary, Putin is out to score points for Russia. He is not out to win friends in Ukraine or Europe. Nor is he out to restore a Russian empire, or build a new Moscow-centric geopolitical order. Putin wants respect for Russia, not external obligations. He wants respect in the old-fashioned, hard-power sense of the word. Other countries should proceed with caution if they consider trampling on Russia’s interests. In the neighborhood, now that he essentially has the Crimean city of Yalta back in the fold, Putin wants to turn the clock back seventy years to the old “Yalta agreement” of 1945. He is pushing for a new division of spheres of influence. For Putin, the contours of Russia’s sphere correspond with the historic boundaries of the Russian Empire and the USSR. Here, Moscow’s priorities override all others. Russia—as Putin has stressed in numerous speeches––is the only country in this neighborhood with a unique civilization (rooted in Russian Orthodoxy and language), a long imperial history, a robust economy (based on energy and abundant natural resources) and the capacity to defend its territory and project power abroad. In the international arena, the United States and China are in the same category (although Putin is often scathing about the United States), but few other states have independent standing.

Putin is a practitioner of realpolitik in its starkest form. In his interactions with regional leaders, Putin has laid out his view that all the states that emerged from the USSR are appendages of Russia. They should pay fealty to Moscow. Other European countries, including the former great powers of France, Germany and the UK, are satellites of the United States, grouped under the umbrella of NATO and the European Union. The unaligned operate in the shadows of two blocs, as Putin put it once to Georgian leaders. The only open question for Putin is who gets to decide the final borders of his new Yalta, Russia or the United States. The future of Ukraine and the Donbas are one set of decision points. Elsewhere, Russia has announced it will lift border controls between Russia and Georgia’s separatist regions of Abkhazia and South Ossetia; and Putin is questioning other borders in the Soviet Union’s old stomping grounds in the Baltics and Eastern Europe. He is challenging the European Union’s frontiers by appealing to eastern Orthodox countries like Greece and Cyprus, where politicians and populations feel aggrieved at their treatment by the austere Protestant powers of northern Europe who set the tone for European economic reform.

Redrawing borders in Crimea was Putin’s first major victory. Putin has long expressed his personal sense of humiliation when Russia lost its geopolitical position in Europe with the fall of the Berlin Wall. Twenty-five years later, Putin told the world Russia was no longer in retreat. In his March 18, 2014 speech marking Crimea’s annexation, Putin savored a moment of personal triumph. Russia had taken back Crimea. Now it would chart its own course in Europe and the world. For the historical record, Russia had never accepted the international order created by the United States and its European allies in the 1990s, Putin declared. It had “swallowed the insult” of the loss of territory and population, because the country was then in such a severe condition that it simply could not realistically defend its interests. Today, Putin emphasized, Russia is a very different country.

Right now the West looks weak to Putin. In his view, the tables have been turned. The eurozone crisis has undermined the European Union politically and economically. The United States is overextended after more than a decade of wars in Afghanistan and Iraq and seems incapable of dealing with crises in the Middle East. China is the dominant player in East Asia. Putin is taking full advantage of the situation, snubbing his nose at sanctions and running rings around European diplomats who are anxious to end the war in Ukraine. He has rallied the population at home with emotional evocations of Russian imperial glories, Soviet nostalgia and the idea of a unique “Russian world.” He has depicted himself as the leader of an international coalition of conservative politicians and states confronting the excesses of a decadent West. Russian history, imperial nostalgia, religion and values have all proven potent instruments for Putin to reassert Russia’s position.

With no endgame in sight in Ukraine, Putin is now focusing on the European arena. The current set of EU and U.S. sanctions come up for review between March and July 2015. After playing the peacemaker in the Donbas with the latest Minsk agreement, and with the oil price on its way back up, pulling along the ruble, Putin is betting that energy and trade will maintain his string of successes. In Hungary, he was welcomed as a great-power representative and important energy supplier. He will shortly have a similar reception in Cyprus, where Russia already has a strong economic foothold. Greeks, Bulgarians, Macedonians, Serbs and Turks are all keen to do business deals with Russia. All of this helps Putin emphasize the fact that Russia has its own coalition, even in the European neighborhood. Putin’s goal is to pull Europeans away from the United States, divide them among themselves and get the European Union to lift the sanctions for him––all without conceding anything on Crimea or resolving the war in Ukraine. In short, Putin wants Europe to understand—as he stated in a 2014 speech to Russia’s ambassadors––that the U.S.-led “unipolar order” is over. The United States trumpeted its victory in the Cold War. Now it is the West’s turn to be humiliated. And Putin intends to have Russia draw up the new borders of a Europe “free, whole and at peace” that the United States, NATO and the EU defined after 1989.

Fiona Hill is the director of the Center on the United States and Europe at the Brookings Institution. She is the co-author (with Clifford Gaddy) of the book Mr. Putin: Operative in the Kremlin (Brookings, 2015).