What Putin Wants in Ukraine: Neutralization On the Cheap 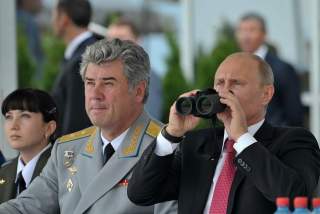 After five months, the crisis in Ukraine has concentrated on the security situation in the East. Russian president Vladimir Putin is running an insurgency in Eastern Ukraine so that the government in Kyiv cannot restore its authority there, while maintaining the fiction that Russia is not involved. This way, he hopes to avoid additional Western sanctions, which are starting to bite.

The Failure of Russian Soft Power

The crisis has reached this point, in part, because Russian soft power has failed. From the start last fall, the Kremlin has banked on the notion that the East was culturally (if not ethnically) Russian and both the elite and a majority of the population looked more naturally to Moscow than the West for political inspiration and economic and cultural orientation. The collapse of the Party of the Regions and the rallying of Eastern oligarchs to the the provisional government in Kyiv demonstrated that the elites were not reliable allies for the Kremlin. Several recent polls have made clear the pro-Kyiv preferences of the people of the East.

For instance, a poll reported by Reuters last week stated that 50 percent of the people of Donetsk wanted to live in a unitary—not federal—Ukraine within its current borders. Only 25 percent wanted autonomy, independence or annexation by Russia. A poll run by the International Republican Institute last week revealed that 73 percent of people in the East rejected the notion that the Russian military needed to come into eastern and/or southern Ukraine to protect Russian speakers and ethnic Russians.

The Choice of Insurgency

This means that the Kremlin is unable to generate strong local support in the East for action against the Kyiv government. To create instability in the East, Moscow has been forced to send in special operations forces and intelligence agents, armed for small-scale operations to seize buildings and military installations. Moscow has enjoyed some success as its agents have overseen the seizure of the city of Slovyansk and installations in ten or so cities across the East. The Kremlin's success here is due not just to its well-trained and well-armed agents, but the lack of motivation and training of Ukrainian security forces—both police and military.

The Kremlin's tactical success, however, has been limited both by the reaction to their intervention in the East and their preference to minimize their footprint in the operation. There has been little rallying to the Russian agents and their rent-a-mobs. That is why the crowds turning out for pro-Kremlin rallies only number in the hundreds, while demonstrations in favor of the government in Kyiv—for instance, last week by students in Luhansk—include thousands. That is also why the leaders of the pro-Russian groups in the East are unknown young men like Vyacheslav Ponomaryov, the self-proclaimed "mayor" of Slovyansk. The elected mayor of the city, Neli Shtepa, "disappeared" into the hands of Mr. Ponomaryov after she inconveniently (for the Kremlin) pointed out that the armed men who took control in Slovyansk were strangers.

Mr. Putin is trying to maintain the fiction of no Russian intervention because he wants to reduce the possibility that the West will levy a third round of sanctions against his supporters and Russian institutions. That's why Foreign Minister Lavrov signed the Geneva deal April 17. He wanted to portray Russia as interested in peace, even though the Kremlin had no intention of instructing its agents in Ukraine's East to abide by the agreement and give up the facilities that they had seized and to lay down their arms. Hiding behind the fig leaf that the gunmen are "pro-Russian Ukrainians," Moscow has eschewed responsibility for the activities of the militants. So Kremlin-generated destabilization in Eastern Ukraine continues.

Unfortunately for Mr. Putin, the West is wise to his gambit. That's why President Obama was openly skeptical of Mr. Putin's intentions within hours of the deal's conclusion and Washington has been quick to point out that the Kremlin is violating its letter and spirit.

Moscow's violation of the Geneva understanding—personified in the torture and murder of politician Volodymyr Rybak—has put the onus on the government in Kyiv. It cannot permit its authority to be challenged by gunmen in the East indefinitely. Mr. Putin wants to make sure that the scheduled May 25 presidential elections cannot be held in the East. He understands that whoever wins that election will have internationally recognized legitimacy and is likely to pursue policies that he considers problematic. So if he controls pockets in the East, he can claim that the vote does not represent the whole country.

Kyiv needs to reestablish its authority throughout the East. Kyiv's efforts to assert control before the Geneva deal were mixed. It is possible that Ukraine's underpaid and underresourced military and police will not be up to the task. But if properly prepared and motivated, the security forces at Ukraine's disposal should be able to achieve this mission. The success that Ihor Kolomsoiskiy, Dnipropetrovsk's oligarch provisional governor, has had with his security forces—by providing the necessary equipment and adequate pay—is evidence of what is possible.

The Kremlin understands this. That's why it has been issuing increasingly shrill warnings to Kyiv. Mr. Putin underscored this with his disingenuous statement April 24 that the use of Ukraine's military against its own citizens would be a "crime." (This is disingenuous because the insurgency in Ukraine's East was manufactured in Moscow.) That is also why the Russian Army has resumed maneuvers on Ukraine's eastern doorstep. Mr. Putin is hoping that the threat of a Russian military invasion will stay Kyiv's hand. If these threats work, the Kremlin wins because their agents retain sufficient control in Ukraine's East to challenge Kyiv's sovereignty and to cast a pall over next month's elections.

Creating a Dilemma for Mr. Putin

Since inaction means slow-motion defeat for the provisional government, Kyiv has little choice but to call Moscow's bluff. It must commit its forces. If Kyiv does so and its forces make strong progress against the militants, it is Mr. Putin who faces a moment of truth. He has done all the preliminaries to justify to his own population an invasion of East Ukraine. His media have painted a lurid and largely imaginary picture of ethnic Russians under siege in Ukraine's East. His parliament has endorsed any military action that he may choose.

None of this, however, addresses his problems with Western sanctions. For this reason, what the West does in this phase of the crisis is very important. The Obama administration has been saying since Geneva that there will be additional sanctions if Moscow does not abide by the agreements terms. It has been clear since at least April 20 that Kremlin aggression continues. Chancellor Merkel noted April 25 that Russia has not fulfilled its Geneva obligations and further sanctions may well be in order. If the U.S. and the EU were to take additional measures now—against one or two more Russian financial institutions or an energy firm and other Russian influentials—it gives credibility to the warning that unleashing the Russian Army will bring catastrophic sanctions against the Kremlin and the Russian economy. It is by no means clear that Mr. Putin is willing to risk that.