What Is Really Driving Chinese Aggression? 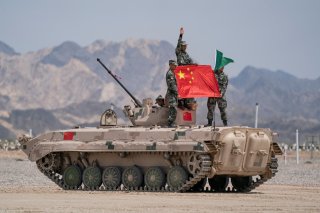 Foreign commentary on China’s international behavior routinely characterizes it (in varying measures) as aggressive, coercive, expansionist, and nationalistic—especially under Chinese Communist Party (CCP) leader Xi Jinping. This is usually attributed to the inherent nature of the CCP and/or of Xi personally. Although the adjectives are often appropriate, what is frequently overlooked or dismissed is the extent to which Beijing is responding to external stimuli or other players’ actions. Indeed, in virtually every case of Chinese assertiveness or belligerence, it is not hard to identify what Beijing felt the need to react to.

For example, Chinese saber-rattling and ultimatums regarding Taiwan are in part a predictable response to cumulative actions by both Taipei and Washington that have retreated from or eroded prior historical understandings with Beijing about what “one China” means and doesn’t mean. CCP leaders have long been prepared to postpone their pursuit of unification as long as those understandings were operative.

Beijing’s ongoing crackdown in Hong Kong was prompted in part by the local authorities’ failure—after more than twenty years—to enact national security legislation (as required by Hong Kong’s Basic Law) and to maintain public order in the wake of protests against such legislation and in favor of democratic electoral reforms. Some protesters had become violent, demanded faster political reform than Beijing had promised, rejected potential paths to compromise, or openly advocated Hong Kong’s independence. CCP leaders, who had earlier been relatively patient, brought the hammer down when they saw their control and Chinese sovereignty at risk. Similarly, Beijing’s ruthless crackdown and tactics in Xinjiang, although an extreme overreaction, were triggered in part by a series of terrorist attacks by Islamic extremists.

There is also a reactive and defensive element to Beijing’s aggressive behavior in all of its territorial disputes—in which China has not been the only assertive and nationalistic player. In the South China Sea, the action-reaction cycle that led over time to Beijing’s massive reinforcement of its infrastructure and military presence has also featured efforts by rival claimants to bolster their own positions while similarly resisting any constraints on their freedom of action. In the East China Sea, Beijing’s increased operational presence over the past decade was driven in part by Tokyo’s “nationalization” of the disputed Senkaku Islands in conjunction with an apparent retreat from what some scholars assert was prior Japanese acknowledgment of the existence of a territorial dispute and willingness to shelve it. Finally, the U.S. view of aggressive Chinese behavior on the Sino-Indian border is largely driven by Indian tactical reports, whereas Chinese accounts of “who started it” might be no less credible.

In each of these territorial disputes, it is worth noting that it probably was not in China’s best interests to unilaterally provoke tensions—unless Beijing in each case was intentionally looking for an excuse to reinforce its military position at the expense of its diplomatic reputation. It is more likely that CCP leaders, preoccupied with myriad domestic challenges—including perennial fears of internal unrest—preferred (as they frequently assert both publicly and privately) to maintain a peaceful external environment that allows them to focus on their domestic priorities. Precisely for that reason, Beijing has long prepared to keep its territorial disputes and aspirations on the back burner. But when other disputants take steps that alter the equation in ways that challenge or erode China’s position, the Chinese feel compelled to react, and often do so disproportionately.

Of course, in all of these cases—including Taiwan, Hong Kong, and Xinjiang—there have been good reasons for the United States to be sympathetic to parties on the receiving end of China’s coercive behavior. When Beijing assaults human rights or acts aggressively toward—or scores points against—U.S. allies and partners, Washington will appropriately take its stand. At the same time, an accurate and objective assessment of such situations and formulation of the most effective U.S. response would consider the underlying interactive dynamics. It is not unreasonable for Beijing to expect or at least to seek that other countries have some understanding of its perspective and the circumstances under which it is acting. U.S. moral or material support for the targets of Chinese assertiveness should not come at the expense of recognizing what and how actions by those other players—and Washington itself—contributed to Beijing’s behavior. At the very least, disregarding the Chinese point of view will hinder mutual understanding and a constructive response to disputes and crises. On the contrary, it usually reinforces Beijing’s belligerent tendencies (as we are now seeing with Moscow on the Ukraine issue).

China’s “wolf warrior diplomacy” amply reflects this reactivity. It is true, as has been widely noted over the past few years, that many Chinese diplomats have grown increasingly vituperative in their rhetoric, especially but not exclusively toward the United States. But this has been reactive in two respects. First, it has partly been a response to an increase in vitriolic comments about China by foreign diplomats, most notably former Secretary of State Mike Pompeo, who also mirrored (if not prompted) Beijing’s resort to misinformation when Washington and Beijing were trading blame for the spread of Covid-19. Some Chinese diplomats apparently thought they should give as much as they got in terms of polemics.

More importantly, “wolf warrior diplomacy” almost certainly has reflected Beijing’s view that its perspective on international issues has been disregarded, particularly by Washington. Chinese diplomats routinely protest what Beijing sees as challenges to China’s sovereignty, security, and stability and the lack of reciprocity and accommodation in U.S.-China relations. But under the Trump administration, and so far under the Biden administration, they have frequently seen their complaints dismissed as invalid, self-serving, exaggerated, or aimed at blaming Washington for bilateral tensions. Those U.S. criticisms are often well-grounded, and Beijing has often been similarly dismissive of American talking points. But clearly, both sides have some valid concerns about each other, and both sides escalate the rhetoric when they perceive that the other is rebuffing their concerns.

This aspect of Beijing’s “wolf warrior diplomacy” was recently explained by scholars who examined the transcripts of Chinese Foreign Ministry speeches over the past two decades. They found that rhetorical hostility increased along with—and usually in response to—growing external criticism of China, which eventually prompted calls by Xi to enhance China’s defensive “fighting spirit” in answer to foreign “scolding.” Beijing has thus been reacting to what it sees as international disdain of its point of view and its expression of Chinese interests and concerns. To whatever extent those interests and concerns are legitimate, Beijing’s frustration is predictable—even when its response is arrogant and obnoxious.

Researchers at the International Crisis Group (ICG) highlighted the reactive component of Chinese international behavior nearly a decade ago when its analysis coined the term “reactive assertiveness” to characterize China’s actions in the South and East China Seas. ICG defined this as “responding forcefully to perceived provocations,” or when “Beijing uses an action by another party as justification to push back hard and change the facts on the ground in its favor.” Although this was an accurate description, over time, the narrative of Chinese “assertiveness” eclipsed the “reactive” part of the equation in most foreign commentary, perhaps because Beijing was deemed to have only “perceived” provocations and was so blatant in “pushing back hard.” There has also been little inclination in Washington to assign any blame to smaller parties when China’s behavior and relative weight usually make it easy to portray Beijing as the bad guy. Consequently, despite scholars’ efforts to refute its historical validity, China’s “new assertiveness” became the prevailing meme.

But the reactive element of Chinese behavior has always been instrumental, and acknowledging it is crucially important. Beijing goes on the offensive not just when it feels the urge or sees the opportunity but when it perceives the need. Even the CCP’s recent abandonment of Deng Xiaoping’s longstanding guidance for China to “hide its capabilities and bide its time” was as much a response to Beijing’s assessment of an increasingly problematic and even hostile external environment, as it was the result of a calculation that China had greater capabilities with which to pursue its interests and security. That combination has set the stage for the CCP’s increasingly forceful reactions to what it genuinely views as challenges by other players to China’s security and sovereignty and disregard for its strategic perspective.

Again, none of this is meant to excuse Beijing’s aggressive and coercive behavior, or to absolve it of China’s ample share of the blame for tensions along its periphery. The CCP leads a nasty authoritarian regime and is ruthless in its exercise of power both domestically and abroad. And even when Beijing has valid international concerns, it routinely overplays its hand or resorts to the bluntest policy instruments and the least subtle forms of diplomacy. Nonetheless, strategic empathy—which is wholly distinct from sympathy—remains crucial to understanding Chinese behavior and to de-escalating crises, and averting conflict. Within that framework, actions by other players—including China’s neighbors and the United States—are key drivers of Beijing’s perception of the international environment and responses to it. Failure or refusal to recognize this can only lead to flawed diagnoses of the challenge China represents and flawed prescriptions for dealing with it.

Many ask why Beijing behaves so badly internationally, and in ways that have been counterproductive to its interests and reputation by sparking backlash from other countries. It is not just because it is in the CCP’s nature to do so. It is primarily because Chinese leaders, like national leaders elsewhere, see challenges and even threats to their country’s interests, security, or sovereignty—beyond the risks that they perceive to the CCP regime’s control and tenure. We should not be surprised if Beijing acts in defense and pursuit of China’s national interests, and sometimes attributes its need to do so to the actions of other countries. Mutual understanding and constructive relations between the United States and China will be very difficult to achieve if Washington overlooks or denies the defensive and reactive component of Beijing’s strategic mindset.