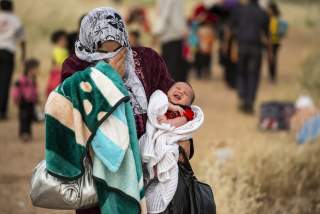 President-elect Donald Trump’s Syria policy is coming into view: coordinate anti-ISIS operations with Russia, and cease funding the “moderate” CIA-funded Syrian rebels given that “we have no idea who these people are.”

As the United States demobilizes its intelligence operation in Syria, the new administration needs to focus on helping its local allies deal with the flood of Syrian refugees over their borders.

But first, the cautionary tale of the Palestinians. After the 1948 Arab–Israeli War, Palestinians fled the new state of Israel in the expectation that they would shortly return to their homes when the Arab armies scattered the Jews. Seventy-eight years later, over five million Palestinians live in the refugee camps administered by the United Nations Relief and Works Agency for Palestine Refugees in the Near East (UNRWA) in Lebanon, Syria, the Gaza Strip and the West Bank.

The post-1948 Arab leadership kept the Palestinians un-assimilated to use them as a cudgel against Israel. Luckily, there is no PLO-like organization seeking to represent all Syrian refugees and stage a multi-decade war against Syria, so the challenge is to resettle the Syrians before they become Palestinians 2.0.

Turkey has the largest contingent of refugees, almost three million, but also has the most developed economy and capacity to absorb them. However, Turkish President Erdogan’s tightening grip on power may go hand-in-hand with an emphasis on “Turkishness” and leave the Syrians with the options of assimilation or onward migration. Turkey has proposed shifting the refugees into a “safe zone” in northern Syria, which will reduce its expenditures and push out Kurds and ISIS fighters. Turkey will use the refugees to get political and economic concessions from Europe, but likely has no long-term intention to allow any but the most economically productive to live in Turkey as Turks to avoid repeating its experience with the Kurds.

Jordan hosts over 650 thousand Syrian refugees. Jordan fully naturalized many Palestinians, who settled there between 1948 and 1967, but they arrived over two decades and their arrival wasn’t without conflict. Indeed, it was only resolved by force of arms in 1970 when King Hussein’s army defeated the Palestinian forces that wanted to absorb Jordan into a Palestinian state.

Jordan's immediate challenge is to put the Syrians to work without putting downward pressure on local wages.  A safe zone in Syria has some appeal, but the bordering Syrian frontier is bleak and undeveloped with little appeal to the business sector.

Lebanon hosts over one million Syrian refugees, over twenty percent of the native population of 4.5 million. The large number of refuges is hard enough, but a million likely-Sunnis is a threat to the sectarian balance among the 18 recognized religious groups, the largest confessions being the Sunni, Shia and Christians. The new Lebanese government, and the Hezbollah-backed president, Michel Aoun, is taking an anti-refugee stance and may try to return the Syrians to safe zones in Syria.

Iraq hosts over 200 thousand Syrian refugees, all in the area controlled by the Kurdish Regional Government. Iraq’s economy has been pummeled by low oil prices and the damage to its infrastructure by the U.S. invasion, the insurgency that followed and the rise of the Islamic State. The Kurds have been gracious, but they are focused on negotiating their relationship with Baghdad and possibly securing control over oil-rich Kirkuk, and would prefer to not to have to deal with another 200 thousand Arabs in their midst as they remember too well Iraq’s “Arabization” campaign in the 1970s.

What to do? Where to go? Europe has likely exhausted its welcome for Middle East refugees, but even if Syrians stopped coming tomorrow, Europe will still have to deal with the influx from Libya. The four host nations don't have the capacity to manage the refugee populations and their continued presence will upset delicate sectarian and political balances that are still being resolved in places like Lebanon and Iraqi Kurdistan.

The UN has estimated it will cost $180 billion to restore Syria’s infrastructure to pre-conflict levels. Realistically, that money will never materialize. The United States just elected a president who wants to rebuild America’s infrastructure and recapitalize its armed forces. Europe is already dealing with the refugees and the political backlash in their wake. Asia has contributed but it won’t be enough. And if the money never shows up, the refugees will never return home.

The primary instigators and funders of the Syrian revolt against the Assad regime are Saudi Arabia and Qatar, so the petro-states should step and assume responsibility for the refugees.  And “assuming responsibility” means more than occasionally mailing a check to the UN while refusing to accept Syrians for resettlement. The Saudis and Qataris, and the United Arab Emirates, should be ready, as the United States was with Iraq and Syria, to offer resettlement.  Granted, living in a Wahhabi kingdom like Qatar or Saudi Arabia will be unattractive for a person from a secular state like Syria, but it has the potential for a softer landing, or onward migration, instead of a life in a UN-administered camp in a country not your own.

And if we “follow the money,” we see that Qatari interest in Syria may be more about the mooted Qatar gas pipeline to Europe that would cross Syrian territory on its way to the world’s richest natural gas market, than freeing the benighted Syrians from the Assad yoke.

In response to criticism that it has shifted the refugee problem to others, the Saudi government has claimed to have given 2.5 million refugees permanent residence in the Kingdom. That’s a dubious assertion, given that an additional 2.5 million people would be noticeable in a country of 30 million, the Kingdom’s aversion to granting citizenship to anyone not born a Saudi, or long-term residence to anyone else and the parlous state of the Kingdom’s finances. And since the “secular” Syrian rebels may not actually believe in a secular democracy, Saudi Arabia may suit them just fine.

And Qatar, with 10 percent of the world’s natural gas, has the resources but has only welcomed a few hundred Syrians (it doesn’t call them “refugees”) and hasn’t offered any social support.

Lebanon and Jordan are once more stepping into the breach. Their richer neighbors offer verbal encouragement and lukewarm support, but they need to do more and do it now.

James D. Durso is the Managing Director of Corsair LLC, a consultancy. He was a professional staff member at the 2005 Defense Base Closure and Realignment Commission and the Commission on Wartime Contracting in Iraq and Afghanistan. Mr. Durso served as a U.S. Navy officer for twenty years. His overseas military postings were in Kuwait and Saudi Arabia, and he served in Iraq as a civilian transport advisor with the Coalition Provisional Authority.