What Rouhani's Speech at the UN Reveals about Iran 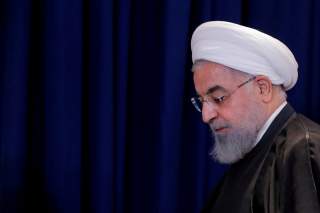 Iranian president Hassan Rouhani certainly received a warmer welcome at the United Nations General Assembly this week than President Donald Trump, but an examination of Rouhani’s misleading statements on the Middle East should raise eyebrows.

During his speech before the UN General Assembly on September 25, Rouhani reiterated Tehran’s claims that an attack on September 22 in Ahvaz, the capital of Iran’s Khuzestan Province and home to much of Iran’s Arab population, was partly caused by Western governments. “Today we mourn the martyrdom of tens of innocent people who were recently murdered in cold blood by terrorists who shamelessly accepted responsibility from a number of Western capitals for their heinous crime. . . . Why can the leaders of these terrorist operations... live and operate freely in Western countries and even openly solicit funds?”

Actually, two groups have claimed responsibility for the attack on Iran’s prized Revolutionary Guards during a military parade in Ahvaz: an Ahwazi resistance group and ISIS, which carried out simultaneous attacks on Iran’s parliament and the mausoleum of Ayatollah Khomeini in 2017. There is, as yet, no definitive evidence that either group carried out the attack. But Iranian leaders have accused Saudi Arabia and the United States of aiding and facilitating the culprits without providing any evidence to support their allegation. Moreover, the Saudi government has adamantly denied any responsibility.

Responding to similar statements made by Iranian leaders about Ahvaz, U.S. ambassador to the United Nations Nikki Haley advised Iran to “look in the mirror.” In fact, Iran’s regime has discriminated against the majority Arab population in Khuzestan for decades, subjecting the region to contaminated water and dire economic conditions, even though the area produces 85 percent of Iran’s oil. The likely cause and conditions for the attack, wherein Revolutionary Guards were killed, are of Iran’s own making for its treatment of the Ahwazis.

Of Rouhani’s statements, perhaps the most misleading were about Syria. “From the very beginning of the crisis in Syria, we have warned against any foreign intervention in the internal affairs of this country and use of unlawful means,” Rouhani said. Additionally, Rouhani claimed in his speech—as many Iranian leaders have done since the war in Syria began—that Iran’s military “advisors” were invited at the request of the “sovereign” Syrian government.

The reality is that Iran and its proxies, including Lebanon’s Hezbollah, entered Syria in 2011 to keep President Bashar al-Assad in power, despite his use of chemical weapons against his own people.

A Congressional Research Service report issued in September states, “Iranian support to Assad against the rebellion is extensive, including the provision of substantial funds, weapons, and IRGC-QF [Islamic Revolutionary Guard Corps–Quds Force] advisors to the Syrian regime. After 2012, Iran gradually escalated its intervention to the point where regional security sources estimated that, by late 2015, it was deploying nearly two thousand 2,000 military personnel in Syria, including IRGC-QF and IRGC.” Included in this number are Iranian regular army forces, which is “significant because Iran’s regular military has historically not deployed beyond Iran’s borders since the 1980–88 Iran–Iraq War. The IRGC-QF recruited a reported 50,000–80,000 Shiite fighters to operate under Iranian command in Syria.”

On September 25, the U.S. State Department’s Iran Action Group issued a report stating that Iran has extended $5 billion in lines of credit to the Syrian regime. Furthermore, “Tehran has deployed as many as 2,500 soldiers on the ground—including Islamic Revolutionary Guard Corps ground forces” to launch attacks against opponents of the Assad regime.

In the Iran Action Group report, the U.S. State Department details Iran’s support for other extremist groups in the Middle East. The report states that Iran uses the Quds Force, which is under the control of the Islamic Revolutionary Guard Corps, to support “terrorist proxies” in the Middle East. “Through the IRGC-QF, Iran supports several US-designated terrorist groups, providing funding, training, weapons and equipment.” The report identifies some of the groups, which include Kata’ib Hezbollah in Iraq and Al Ashtar Brigades in Bahrain. “The Iranian regime has also been documented facilitating travel by senior leaders of some of these groups to Iran, often under the guise of religious education,” the report states.

Regarding another issue of importance to the United States and its allies, Rouhani, in an interview with NBC, threatened to close the Strait of Hormuz in the Gulf, where Iran has expanded its naval power in recent years. Iran’s leaders have said they might close the strait to prevent other states from exporting oil once the United States imposes an oil embargo on Iran in November. “If the United States wishes to use force in order to sanction the petroleum industry of Iran, it will certainly see the appropriate response. We do have the power to secure our waterways and keep our waterways free.” The interviewer asked Rouhani if the Trump administration should take his statements as a warning.

“This is not a warning,” Rouhani replied. “This is reality. If the Persian Gulf waterway is to remain free and secure, it must remain so for everyone.”

While Rouhani claims Iran is the non-aggressor, the history of Tehran’s activity in the Gulf proves otherwise. In 2017 alone, the U.S. Navy recorded fourteen incidents where the Iranians harassed U.S. warships traveling in the Persian Gulf. Iranian vessels have also engaged in harassment of U.S. naval vessels in international waters on numerous occasions. And yet, in his UN speech, Rouhani said “that the United States’ understanding of international relations is authoritarian,” whereas “[Iran] support[s] peace and democracy in the entire Middle East.”

Although Trump was derided for some of his remarks before the UN General Assembly, world leaders should take a closer look at Rouhani’s claims while he is in New York. This might be the first time an Iranian leader’s speech is more welcomed than that of a U.S. president, but this does not necessarily mean Rouhani’s rhetoric is more truthful.

Geneive Abdo is a resident scholar at the Arabia Foundation and the author of four books, most recently, The New Sectarianism: The Arab Uprisings and the Rebirth of the Shi’a-Sunni Divide.