This Is What Russia REALLY Fears in Syria 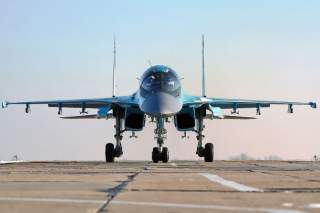 The ongoing Russian air strikes against mainly Syrian opposition groups not affiliated with the Islamic State have not only taken the United States off-guard, but also elicited a number of well-argued analyses on the causal factors of Russian actions. This debate, with few exceptions, underscores the irony and emptiness of Russian President Vladimir Putin’s assertion that he is fighting the Islamic State. In reality, his targets comprised almost all Syrian opposition groups. One argument contends that Russian actions are meant to prop up the shaky Syrian regime. Concurrently, some analysts argue that Putin’s view of the political landscape in Syria rests on dividing the country into two camps: one formal camp, led by the Syrian regime, and the other, a terrorist camp, led by a motley Syrian opposition groups, at the forefront of which is the Islamic State. In other words, Putin has painted all opposition groups in the terrorist corner, while at the same time acknowledging the legitimate rule of the Assad regime.

How persuasive are such arguments? No doubt the Russian military buildup in Syria, especially in the Alawi region of Latakia and Tartus, and recent Russian military involvement in the Syrian conflict are intended to prop up the Syrian regime. Since March 2015, the regime has lost significant territories consequent upon concerted attacks by a reconfigured Salafi-jihadist axis, funded and armed with sophisticated weapons mainly by Saudi Arabia, Turkey and Qatar. As I argued on these pages in May 2015, the al-Nusra Front-led alliance, under the name of Army of Conquest seized control of the Syrian city of Idlib in late March 2015, a major urban center with a population of around 165,000 people. Idlib is considered to be the second provincial capital to fall into opposition hands after Raqa, now a stronghold of the Islamic State. No less significant, this alliance united anew with another Salafi-jihadist organization Ahrar al-Sham and waged a battle for Jisr al-Shaghour under the name "Battle for Victory.” By taking the geostrategic town, the Salafi-jihadists have edged closer to the coastal province of Latakia, President Assad's stronghold, and they are now a short distance from villages loyal to the government near the coast.

Meanwhile, the Army of Islam (Jaysh al-Islam), led by the Saudi Arabian-supported Zahran Alloush, along with other armed factions grouped together under the name of the East Gouta Council, have waged constant attacks against the regime from Gouta in Damascus countryside. At the same time, al-Nusra Front and the Islamic State waged a battle against the regime’s ally Hezbollah in al-Qalamoun and al-Zabadani areas adjacent to the Lebanese border. Although Hezbollah has been able to fend off the attacks by al-Nusra and the Islamic State, it has not been able to impose its complete control over these areas. Significantly, Hezbollah has lost a significant number of its fighters in this war of attrition, which the Shi’a Islamist party aspired to settle swiftly.

This apparent concerted effort to wage an ongoing multi-pronged attack on the regime is what made both the Iranians and Russians worry about the near future viability of Assad rule. In fact, by June 2015, the intelligence and political rumor mill in Beirut buzzed with news that the battle for Damascus, supported by Saudi Arabia and Turkey, has neared a conclusive end. During my visit there in June and July, I came across the palpable feeling of the much exalted prospective victory over Damascus. The military setbacks suffered by the regime and the inconclusive effort of Hezbollah to control the approaches both to the Syrian capital and Lebanese border appeared to confirm the pro-Saudi and Turkish hopes. Paralleling this development, a new reality has finally dawned on some governments. The actual number of foreign jihadi fighters in Syria has remarkably belied the low estimates put out by many governments, including that of United States. And, no less significant, the chronic shortage of Syrian recruits in the army of the Assad regime, together with mounting cynicism over Hezbollah’s intervention in Syria by some of its members and their parents, have even convinced the skeptics that the defeat of the Assad regime has become a matter of time.

Undoubtedly, this plausible analysis raised the wishful thinking of some regional and international governments and observers alike. But what this analysis left out was the extent to which Russia and Iran have been strategically dedicated to the survival of the Assad regime. This serious flaw in the analysis obfuscated Russian readiness for military intervention in Syria, which clearly took the United States, among other nations, by surprise.

Washington should not be taken off guard again as to the unfolding actions of the concerted Russian and Iranian strategy. On one end of the spectrum, being the last bastion of Russian influence in the Middle East, Syria commands a geostrategic and geopolitical dimension in the calculus of Putin’s strategic thinking. Syria offers Russia an important outlet to the Eastern Mediterranean putting southern Turkey, Arab coastal states, Cyprus and Israel in Moscow’s potential sphere of influence. Syria also offers a theatre of operations in which radical Muslims, a significant number of whom are from the Caucasus, can be fought. Putin has been extremely concerned about the expansion of radical Salafism and Wahhabism into Russian heartland, potentially affecting the ideology of the growing number of Russian Muslims. No less significant, Syria offers Putin a leverage with which he can face off Western actions in relation to Ukraine, Crimea, Abkhazia and South Ossetia. Russia, by militarily inserting itself in Syria, has become both part of the problem and solution of the Syrian crisis, which the West can no longer afford to ignore.

On the other end of the spectrum, Putin has been moved by two factors, which analysts and observers of the Syrian crisis have either underestimated or ignored. Putin has positioned himself as the protector of the minorities in the greater Middle East. The Islamic State has deepened sectarian divides and impulses to levels not seen before in the history of the modern Middle East. A significant number of Christians, Yezidis, Ismailis, Druzes, Shi’ites and Alawis have virtually lost their faith in Western determination to protect them. They have been left behind to the merciless claws of totalitarianism and radical Islam. Fears of past and historical life under Sunni serfdom and occasional persecution have been put on display by the Islamic State’s unprecedented use of violence in the name of orthodox Islam. Gone are the days of French, British and American resolve to protect vulnerable minorities. I have been scornfully reminded of this fact by many members of these minorities, whose feelings of betrayal by and distrust towards the West have become viscerally deep. Not only did Putin fathom, unlike many in the Western world, the deep crisis into which the Sunni world finds itself; but also realize the reliability of minorities as both a foil to Sunni radicalism and a bridge to Russian influence.

Significantly, Russia and Iran have come to see eye to eye the importance of shaping a new regional order in the Middle East not bounded by Western and Sunni dictates. Herein lies the determining factor of Russian strategic decision to get militarily involved in Syria. Putin’s fight to protect the Assad regime is part and integral to his strategy of creating a sphere of influence in the greater Middle East. His is a strategic vision that coincided with Iranian strategic desire to have an uninterrupted land access from Tehran to the Mediterranean ports of Tartus, Beirut and Tyre. This is what Alexander the Great had done by defeating the Persian capital of Persepolis and forcing the surrender of the Persian fleet following his successful siege of Tyre. History dies hard in that part of the world.

In fact, this strategy of bringing about what King Abdullah of Jordan called the Shi’a crescent has been actively pursued by Iran. But it was easily planned than carried out. The recent military setbacks suffered by the Assad regime at the hands of an energized Salafi-jihadist movement, supported by an Islamist government in Ankara and a Saudi-Wahhabi leadership, have threatened the very essence of this strategy. Moreover, rarely a Middle Eastern power has been able to extend its influence throughout the region without the support of a world power. This explains the conflation of Russian and Iranian national interests into a common strategy, whose significance has been enhanced by Iran’s nuclear deal with the international community and the expected reentry of Tehran into the world economy.

Based on this analysis and past Russian actions in Chechnya and Ukraine, Washington must realize that Putin will strike indiscriminately at all Syrian opposition groups posing a threat to the gateways of the future minoritarian state whose borders would include the Alawi heartland (Latakia and Tartus) and the major urban centers and their countryside in the Northeast (Aleppo and Hama), the center (Homs) and the southeast (Daraa and Suwayda). Most importantly, as Moscow carries out its plan to try to mercilessly bomb into submission the various Syrian opposition groups, at the forefront of which are the Islamic State, al-Nusra, Ahrar al-Sham and Jaysh al-Islam, Washington should expect a push by the Iranian Revolutionary Guards and Iraq’s Shi’a popular mobilization units into the Sunni heartland of Iraq towards the Salafi-jihadist hub border city of Abu-Kamal in preparation to creating a corridor linking Baghdad with Homs, the future capital of this minoritarian state. Making Homs the capital of an Alawi state had been the objective of the Ba’thi state following an attempt to dislodge it in 1964 by Arab Sunni nationalists. Put simply, while Russia disrupts and destroys the command and control centers of Syrian opposition groups, Iran, under the flag of its proxy forces in Iraq, would most likely forge its way from Baghdad towards Homs (and not Mosul). This is what makes the agreement of sharing intelligence among Iran, Iraq and Syria strategically sensible.