This Is What Russia Really Wants 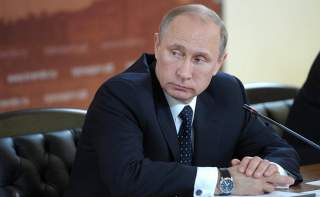 With the European Union extending sanctions for a further six months, relations between Russia and the West remain tense. The annexation of Crimea, coupled with the continued conflict in eastern Ukraine, has convinced many in Europe and the United States that a more aggressive posture toward Moscow is imperative. But is there a different path open to both that could eventually lead to a more amicable relationship?

Andranik Migranyan, a prominent foreign policy expert and the head of the Institute for Democracy and Cooperation, a think-tank sponsored by the Russian government, appeared at the Center for the National Interest to offer some valedictory remarks about U.S.-Russia relations before he returns to Moscow. A veteran observer of the United States, he expressed confidence that Moscow will eventually persuade Washington to recognize and acknowledge it as a great power. “If you are resolute and determined to resist, in the end, America,” he said, will come around. That was true in “Vietnam, Iraq, Libya, now in Ukraine. You must resist until the last.” According to Migranyan, “I am absolutely sure that Russia is not going to yield anything. Russia has its interests, which are very clearly formulated.”

CFTNI president Dimitri K. Simes, in introductory remarks, listed several past Migranyan predictions that had come true—he’d warned that the Obama administration’s “reset” policy would run into trouble, and he’d anticipated both of Vladimir Putin’s exchanges of power with Dmitry Medvedev, for example; further back, he’d spotted storm clouds on the horizon for both Yeltsin and Gorbachev.

Now Migranyan pointed to new problems. For one thing, he castigated the Ukrainian government for failing to implement the internal reforms contained in the Minsk agreement—and of even denying to its citizens that it had committed to such reforms. He argued that Moscow was trying to use its influence over the separatists in Ukraine’s east, but that Washington had not exerted the same pressure on the Ukrainian government—and he expressed a great faith in Washington’s influence there, suggesting that a mere call from the Vice President could stop the conflict.

Migranyan was pessimistic about the direction the conflict was headed, suggesting that the Ukrainian government is caught in a double bind: further war would likely lead to “constant defeats,” yet peace would be unlikely to yield enough aid for stability. War, he suggested, would at least help the government mobilize society and defer the economic problem, and so escalation was likely. The end result, said Migranyan, would be growing pressure on the United States to arm the Ukrainian government—and, he said, several American experts had warned that more arms would not remove Russia’s escalation dominance. If events go in this direction, then the “survival of Ukraine as a unified country,” stated Migranyan, would be “miraculous.”

Yet despite all this, Migranyan suggested that the Ukraine crisis was not the only cause of tensions between Russia and the West. Instead, he said, the broader question of the “fate of Soviet heritage” was at the root. After the collapse of the Soviet Union, he said, the West “swallowed” Eastern Europe, and it is now trying to do the same with some of the former Soviet republics. He accused the West of trying to restore the conditions of the 1990s, when Russia was weak enough that there were jokes that the Russian foreign ministry was an office in the U.S. State Department. In this vein, he expressed concerns about a Hillary Clinton presidency, on the grounds that officials from the 1990s have tended to see Russia as a country that can be written off and ignored.

Migranyan said that there was no desire to restore the Soviet Union or even to put NATO’s Article 5 collective defense guarantees to the test in places like the Baltic States or Poland. Instead, he argued, Russia wants to be treated as a great power and even a partner, and this would entail Russian concerns being taken seriously—which, he said, has “never ever” happened since the fall of the Soviet Union. A major, longstanding Russian ambition, he said, has been a new security partnership in Europe, with NATO as one pillar and Russia as another. “Unfortunately,” said Migranyan, “Washington treats nobody as a partner.”

Russia’s ambassador to the United States, Sergey Kislyak, offered extended comments as well. He differed from Migranyan’s characterization of Russia as a nation seeking respect, saying that this suggested a “kind of inferiority complex.” “Russia has been Russia even before [the] United States appeared on the map...we have [a] great culture, vast land, phenomenal talents...” said Kislyak. “We do not seek recognition as a normal country. We have interests, including in security, that we want to be taken on board.”

In addition, Kislyak downplayed the significance of recent Russian military maneuvers off the coasts of Western countries, while warning of “muscle-flexing” by NATO forces near Russia’s borders. He complained of “exercises that never stop” that serve as a “trick” to permanently deploy forces near Russia, against what was “promised to [Russia] in the Founding Act.” He further said that “there is no discussion in Russia of deploying nuclear weapons in any aggressive fashion,” but “NATO is on the border of violating the NPT treaty by making the non-nuclear-weapon countries of NATO participate in training for nuclear missions, something that is certainly very...troublesome to us.” Kislyak stated that this was now likely the “worst period in our relations after the end of the Cold War.”

Some attendees expressed skepticism about Migranyan’s reading of events, and particularly on the situation in the Baltic States. Dov S. Zakheim, a former senior official in the Bush administration and vice chairman of CFTNI, said, “I’m a little puzzled...I wasn’t the greatest fan of NATO expansion when this first started, but when I listen to you talking about the great threat from the Estonians, or from the Latvians, or from the Lithuanians, it’s the mouse that roared.” Migranyan responded by saying that membership in NATO was prompting such countries to engage in needlessly provocative--and even outright “ugly”-- behavior toward Russia. “Don’t bark [at] a big bear,” he said. “It’s dangerous.”  It served as a reminder that numerous frictions remain not only between Russia and the United States, but also with its European neighbors.