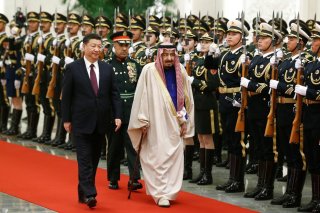 The ongoing war in Ukraine has done much to clarify the geopolitical landscape of the current era. On the one hand, America and its Western allies have been providing military assistance to Ukraine as well as imposing economic sanctions on Russia (though not yet completely on Russia’s petroleum exports which many Western economies have no ready substitute for). On the other hand, the non-West has largely been reluctant to follow the U.S. lead in sanctioning or even condemning Russia. Non-Western countries instead either seek to distance themselves from the conflict or take advantage of it. China and India, for example, have seized upon the opportunity to buy large quantities of Western-sanctioned Russian oil at the steeply discounted price Moscow is selling it for even while their corporations are wary of selling goods to Russia to avoid incurring sanctions on their more lucrative trade with the West.

Saudi Arabia and the United Arab Emirates (UAE), the two OPEC members reputed to have the greatest ability to increase their oil production, have taken an especially interesting stance on the conflict. The United States and other Western governments have asked them both to increase their oil production in order to moderate or even bring down the world market price of oil that Western sanctions on Russian oil exports have helped raise through reducing the number of customers willing to buy Russian oil. But while Saudi Arabia and the UAE have been marginally increasing their oil production since the beginning of the Russian invasion of Ukraine, they have not been willing to do this dramatically.

This has been very disappointing for the Biden administration. After decades of the United States protecting them from Iraq’s Saddam Hussein, the Islamic Republic of Iran, Al Qaeda, ISIS, and other threats, the Biden administration hoped that they would return the favor and help the United States in return. Riyadh and Abu Dhabi’s refusal to do so may have been inspired by President Joe Biden’s criticism of their democratic deficits and dismal human rights records (as well as Biden’s specific criticism of Saudi crown prince Mohammed bin Salman while he was campaigning for president in 2020). The Saudi and Emirati governments are also reportedly unhappy about what they consider Washington’s recent lack of support against Iran, particularly when it comes to Yemen. They also see American concern about Ukraine as distracting Washington from helping them against Iran. Further, if U.S. interest in the Middle East really is declining (as they fear), then this may seem all the more reason for them not to do anything to antagonize Russia. Finally, one of the reasons they cite for decision is their “need” to maintain agreement on oil production limits that they made with Russia via the OPEC+ format.

These are all understandable reasons for why Saudi Arabia and the UAE would not want to cooperate with the United States and raise their oil production. Still, it is easy to imagine why they would see it in their interests to increase their oil production as Washington has requested. Doing so would provide a reason for the Biden administration to take a friendlier and less critical view of them. Similarly, while increasing oil production would lower the price of oil (which does not benefit oil exporters like Saudi Arabi and the UAE), their increased export volume would make up for much of this loss. Further, sustained high oil prices could contribute to a worldwide recession that leads in turn to dramatically reduced oil prices and importing countries buying less oil from them. Increasing Saudi and UAE oil production now, then, might forestall an even more precipitous decline in oil prices in the future. In addition, with Russia consumed by what is clearly going to be a long, drawn-out war in Ukraine, Moscow may become increasingly less able to act effectively in the Middle East. Finally, it must be noted, Saudi Arabia and the UAE compete with Russia in the oil export market; Western sanctions on Russian oil exports are an opportunity for them to gain market share from Russia as well as to forestall Western voices calling for reducing sanctions on Iranian oil exports.

But while there are several self-interested reasons for Saudi Arabia and the UAE to increase their oil exports as the Biden administration has called for, they have not yet seen fit to do so—though this could change. Imagine, then, how they might behave if a conflict arose in which the United States and China were sharply at odds—such as over Taiwan. While Russia is a major oil exporter, China is a major oil importer. In this case, the United States would want Saudi Arabia and the UAE to greatly reduce or even end oil sales to China while China would want to continue buying oil from them as well as Russia. For their part, the interests of Saudi Arabia and the UAE—along with many other oil exporting countries—would be to keep on selling oil to China and not cutting back their production.

Under these circumstances, the United States could be faced with a difficult choice: allow Gulf Arab oil sales to continue and risk this contributing to a Chinese victory in Taiwan or wherever else the conflict was taking place, or forcibly prevent the export of Arab Gulf oil to China and thus severely alienate the Arab Gulf states—and thus provide China with an opportunity to displace American influence with them.