What Is Saudi Arabia's Grand Plan for Pakistan? 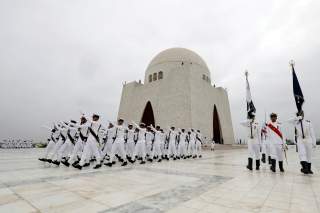 A return to the International Monetary Fund (IMF)—for the twenty-second time in Pakistan’s history—has been all but certain for much of this year. But Pakistan’s new quarterback, Prime Minister Imran Khan, came late into the game and decided to throw a few Hail Mary passes to his country’s traditional receivers of wish lists, hoping to avoid the fund altogether or pursue a smaller bailout and avoid strict conditionality.

Khan’s first foreign visit since coming into office was to Saudi Arabia. During the visit, his delegation proposed to the Saudis a series of energy and mining investment opportunities. It appears that Islamabad asked Riyadh to park funds close to $10 billion with the State Bank of Pakistan—well before these investments achieve financial close—to shore up Pakistan’s forex reserves in the interim. In this context of Islamabad’s scramble for dollars, Pakistani officials have claimed—and subsequently denied—that Saudi Arabia was invited to join the China-Pakistan Economic Corridor (CPEC) as a “strategic partner.”

Time has now run out for Pakistan. And on October 4, after Pakistan’s main stock exchange index declined for the sixth consecutive day, the finance ministry finally announced that it intended to begin formal talks with the IMF for a bailout. But discussions between Islamabad and Riyadh on investments, including projects related to CPEC, will continue. For both sides, these potential investments have economic and strategic value, but they are also fraught with risk—both legal and geopolitical.

Potential Risks and Rewards of Saudi Investment in Pakistan

Pakistan has floated five sets of potential investments to Saudi Arabia. These include the Reko Diq copper and gold mine in Balochistan, valued in the hundreds of billions of dollars. In 2017, Pakistan lost an international arbitration case to the Tethyan Copper Company, which held an exploration license for Reko Diq, but was denied a mining lease by the Balochistan provincial government in 2011. The tribunal is expected to determine Pakistan’s liability this year. The figure could exceed $11 billion.

Should the project move forward, the new concession holder would likely provide Pakistan with the funds to pay the penalty, which—depending on its size—could result in a major cut to Pakistan’s royalties. On top of the financial and legal risks, the mine is located less than one hundred miles from Pakistan’s border with Iran.

Reko Diq would certainly be a target for insurgent violence, though the Pakistani state is equipped to reduce physical risk with the right mix of political and security measures.

Resource nationalism is a driver of the ethnic Baloch insurgency, but it also receives support from regional states.

In August, a suicide bomber with the Balochistan Liberation Army attacked a convoy transporting Chinese engineers to the Saindak copper and gold mine, leased by the Metallurgical Corporation of China. The attacker used an Iranian vehicle. Militants with several Baloch separatist groups combatting the Pakistani state are believed to be in Afghanistan or Iran. Projects linked to the Saudis would become targets in the same way Chinese projects have been over the past fifteen years.

Before moving forward with extractive projects in the province, Islamabad must factor in geopolitical risk. And it should develop an inclusive and redistributive economic framework that results in a share of the earnings going directly into the hands of local citizens.

The second set of projects includes two government-owned operational regasified liquified natural gas-fueled power plants in the Punjab province. Riyadh reportedly expressed interested in purchasing equity in the plants on a government-to-government basis, but that may not be legally possible. Instead, a Saudi power company, ACWA Power, could take part in open bidding for the plants. Sale of the plants could earn Islamabad much-needed cash, but there are geopolitical complications tied to that sale too. These power plants are fueled by liquified natural gas (LNG) from Qatar. Sale of the plants to a Saudi public or private entity would likely require an alternate source of LNG and could even impact Pakistan’s fifteen-year LNG supply contract with Qatar.

The third potential Saudi investment in Pakistan is a Saudi Aramco refinery in Gwadar, the site of a Chinese-operated port and industrial zone. Like the Reko Diq mine, Gwadar is located close to the border with Iran. Gwadar is a competitor to Iran’s Chabahar port, where India will operate a terminal that will be used to bypass Pakistan to access Afghanistan and Central Asia. It is an end node for the China-Pakistan Economic Corridor, which begins in Kashgar, located in China’s Xinjiang region.

Economic activity and investment in Gwadar have progressed tepidly when compared to other regional upstarts like Duqm in Oman and Khalifa Port in Abu Dhabi, which have received significant inflows from China, with the potential to exceed $10 billion. Investment from a global energy giant like Saudi Aramco would catalyze other investments and boost port activity. A refinery in Gwadar would give the Saudis an economic foothold in a strategic location—just outside the Strait of Hormuz but close to Persian Gulf shipping lanes—and could lock Pakistan into purchasing Saudi crude.

There, however, may be limits to the scalability of the investment. Earlier this year, Saudi Aramco signed a memorandum of understanding with a consortium of Indian state-owned oil companies for a $44 billion oil refinery and petrochemicals complex in India. Still, a Gwadar refinery would meet domestic demand in Pakistan, helping it boost deep conversion refining capacity and enabling it to import cheaper crude oil, resulting in savings on its import bill.

In Gwadar, too, there are geopolitical complications for both Pakistan and Saudi Arabia. Saudi investment in Gwadar reduces Pakistani dependence on China for the port’s success. And it could constrain China’s future options for the city.

Whether it’s infrastructure development, energy trade, or defense hardware sales, China is ubiquitous across the Middle East and has been an equal opportunity partner to both Iran and its Gulf Arab adversaries. Iran is crucial to China’s Silk Road Economic Belt. And the Gulf Arab states, especially the United Arab Emirates, could be critical to its Maritime Silk Road.

Assuming China does indeed have a plan for Gwadar, its plan could include eventually developing the port to replace or supplement major Persian Gulf transshipment hubs. Or China could seek to fold Chabahar and Gwadar into a single Makran coastal region economic belt, in the event Iran tires of Indian lethargy. But if Pakistan and Saudi Arabia move forward with a refinery in Gwadar, it may make it difficult for China to integrate Iran into energy projects in or through Gwadar. (Examples include: a Sinopec refinery in Gwadar using Iranian oil; a gas pipeline running from Iran to the China-Pakistan border via Gwadar.)

Pakistan has apparently also proposed Saudi investment in the North-South gas pipeline, which would transport gas upcountry from Karachi to Lahore. Pakistan signed a government-to-government agreement with Russia to build the pipeline and supply the LNG. The two countries, however, have not come to agreement on pricing, and Rostec has struggled to find financing for the project, though reports last year indicated that China’s Silk Road Fund could finance it. Russia may have difficulty supplying the LNG. In any event, what role the Saudis could or would play in the pipeline project—as an addition to the consortium or a replacement for an existing member—is unclear.

Finally, Pakistan has invited Saudi Arabia to take part in open bidding for exploration in ten oil and gas blocs. Fuel makes up the single largest imported commodity group for Pakistan. Reducing its dependence on imported fuels by ramping up domestic oil and gas exploration is critical for Pakistan to escape its boom-bust cycles that bring it to the IMF’s doorstep every few years. Pakistan may actually have enough recoverable natural gas to not only meet domestic demand but also export it. But does Saudi Arabia see an energy independent Pakistan as in its interests?

Separating the Economic and Strategic is Easier Said than Done

The biggest question for Pakistan might be: what are the noneconomic costs of Saudi money? Gulf Arab states have not shied away from using aid and investment to shape a regional order that aligns their major strategic interests. In recent years, especially under Crown Prince Mohammed bin Salman’s influence, the strategic use of aid and investment has heightened.

There is indeed an economic basis for Saudi investment in Pakistan. Saudi companies have been investing in Pakistan for decades. The Saudis are keen on diversifying overseas investments, moving beyond its own domestic extractive industries. But now more than ever, strings are likely to be attached. Riyadh has made clear that its main priorities are to contain what it sees as its main threats: Iran, Qatar (and the Muslim Brotherhood) and Turkey.

So Pakistan must consider what the Saudis want in return and whether it is a price it is willing to pay. Pakistan has deftly insulated itself from the Iranian-Saudi cold war, especially in the wake of the Saudi-led Yemen operation. But it needs more foreign direct investment (FDI) and from more diverse sources. FDI from China has been growing amid a decline in net inflows from Gulf Arab states. Sympathy for Iran runs high in Pakistan, but neither has Iran made significant investments in Pakistan in the past nor is it in a position to do so today.