What a Second Trump Term Would Mean for Asia 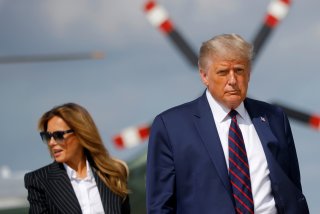 Recent events may have turned the tide in a U.S. presidential campaign that many predicted would elevate challenger Joe Biden to the White House. President Donald Trump seems to be recovering strongly from his coronavirus infection. He still trails in most polls, but that was also the case in 2016. His highly visible energetic support from disaffected voters is also similar.

The consequences for the United States and East Asia are dramatic given previous predictions and the policy differences between Trump and Biden.

On July 1, the New York Times published an op-ed titled, “Is Trump Toast?” The op-ed cited poll numbers that showed Biden ahead of Trump by double digits and showcased an oddsmaker who put Trump’s chances of winning the electoral college at just “one in 10.” The author concluded that Trump’s “situation appears to be dire.”

Later in the summer, several analysts reprised a favored prediction of the Left in recent decades that a younger and less white electorate will doom Trump and other Republicans: what one writer labeled “significant demographic alterations.” Others assumed the economic damage from the coronavirus pandemic would hurt Trump irreparably.

Now, even some outlier polls, which undercounted Trump’s support in 2016, have him leading in swing states like Arizona, Florida, and Michigan. The economy has rebounded dramatically: the second quarter exhibited the strongest GDP growth in history and unemployment has dropped from a pandemic peak of nearly 15 percent to less than 8 percent.

A shock poll in early September showed Trump tied with Biden among Hispanic voters in heavily Democratic Miami-Dade County in Florida, one of many indications calling into doubt Democratic hopes of demographic inevitability. Furthermore, Trump is dominating the campaign with well-attended events that contrast him favorably with Biden, who holds no events on some days. The news cycle has also turned to Trump’s advantage with events that play to his strong suits. Violent protests in Democratic-governed cities and the unexpected fight to confirm a new Supreme Court justice are the latest examples.

This development raises a question: what would a second Trump term look like for America and East Asia? Second presidential terms usually range from lackluster to disastrous. Bill Clinton’s second term was mired in scandal. George W. Bush saw his popularity plunge into the thirties amid failure in Iraq and a financial crisis. Barack Obama oversaw prolonged economic stagnation that created an opening for Trump.

Administrations usually undergo staff decay as they progress. Smart and driven staff whom a new president trusts from his campaign depart and are replaced by lackluster careerists. They shift focus from accomplishing things to consolidating a president’s legacy, which usually means going through the motions of governing. Second-term presidents also lose power over Congress and turn more to foreign affairs, where they can act unilaterally.

Trump may prove to be an exception to this trend. He actually started with ineffective and disloyal staff but has improved with effective and energetic loyalists like Secretary of State Mike Pompeo, Attorney General Bill Barr, and National Security Advisor Robert O’Brien. They may be aided by the shock of a Trump reelection in handling congressional Democrats who are never far from an intra-party civil war.

On foreign policy, talk of a second trade deal with Japan would amount to nothing, ensuring continued strong relations between Washington and Tokyo.

China would be different. The debate over “decoupling” the U.S. and Chinese economies misses the point. The United States and many of its allies have already taken major steps to stop China’s efforts to dominate fields like artificial intelligence and telecommunications. Trump and his lieutenants would only increase efforts to stymie Beijing, which they have begun by restricting semiconductor technology and denying China access to top foreign research institutions.

A reelected Trump might finally shift U.S. military power from the Middle East and Europe to the Pacific region—something about which there has been much talk for a decade. While he has declined to terminate the phase one agreement with China, Trump no longer boasts much of its achievement. It will likely survive only in name, and only as long as China needs to import U.S. agricultural products. A reelected Trump may also strengthen trade ties with India, Vietnam, and Taiwan.

This path stands in stark contrast to Biden’s. While his aides have claimed his China policy would be similar to Trump’s, Biden recently declined even to label Beijing an “opponent,” opting instead for “competitor.” Biden also opposed Trump’s “Section 301” national security tariffs on China. His advisors are signaling he could bargain them away for a climate change deal that Chinese President Xi Jinping would be only too happy to sign—and then ignore.

Domestically, a second Trump term would likely see the expansion of his massive if largely unheralded deregulation spree. Cutting red tape for businesses and reversing decades-long regulatory trends that were increasing the cost of energy—and therefore the cost of everything—helped spur the pre-pandemic Trump boom, and would likely do so again.

Like the nation he leads, Trump has been the subject of many a premature obituary. But the odds increasingly favor happier days ahead for both his presidency and America.