What Should Donald Trump Really Be Impeached For? 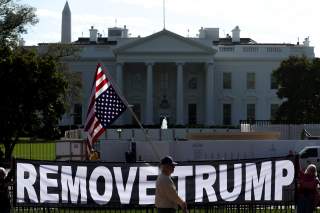 The strategy the Democratic Party is following in its pursuit of the impeachment of President Donald Trump is based on a half-baked analysis of public opinion. While the part that is baked is very enticing, the whole cake will cause severe indigestion. To justify this strong claim, I must lay out my credentials. I served as a Senior Associate of Columbia University’s highly regarded Bureau of Applied Social Research, where we conducted decades of studies of public opinion, working with some of the greatest mavens of the field, including Paul F. Lazarsfeld. As a professor of sociology, I have continued to closely follow trends in American public opinion for four decades.

The Democrats decided, wisely, to focus on one issue: on Trump’s bid to draw on his power as the president not to serve U.S. interests, but to increase his chance of reelection, even as his months-long pressure campaign undermined Ukraine’s effort to stand up to Russia. The Democrats correctly figured that what happened here is a straightforward issue, which the public at large can wrap its head around and understand. It is dramatic and the charges are well-supported by evidence—i.e., there is, to paraphrase Mark Shields, a whole smoking armory, not merely a smoking gun. The Democrats also realize that harping on the Mueller report is not carrying the day because the public finds it confusing and inconclusive. So far so good.

I predict, however, that the narrow focus of the impeachment will run into two traps. First of all, Trump and his associates are already “normalizing” his misconduct by arguing that such conduct is common. White House Chief of Staff Mick Mulvaney has stated: “I have news for everybody: Get over it. There’s going to be political influence in foreign policy.” The president’s supporters will be able to point to steps taken by other presidents that will seem similar to the public to what Trump did. And the GOP will argue that even if this case of quid pro quo was wrong, it is not sufficient to remove an elected president from office. During the trial to follow, they will bring witnesses who will highlight these two points and muddle the waters, very likely leading to acquittal. Trump then will go into the 2020 election having been “vindicated.” The narrow case for impeachment will also suffer once the identity of the whistleblower, who started the whole ball rolling, is revealed.

The Democrats should instead draw a much broader bill of indictment. It should lead with the Ukraine narrative. However, it should also include page after page of other offenses that qualify as “High Crimes and Misdemeanors.” As we shall see shortly, many of these additions will not require any more hearings, corroborating emails or revealing insider testimony, because the evidence for these additional indictments is readily available—provided by the culprit himself. Trump is like one of those defendants in a trial who arrogantly ignores the advice of his lawyers, is so sure that he has locked in a crucial part of the jury that he feels free to lash out at the process, and has so little self-control that he spills it all out. What follows is a rough draft of such an inclusive indictment, put together in a few days, by one professor with his research assistant. Surely congressional committees could do much better in, say, a week

a. He allied himself with those who openly threatens the United States (North Korean dictator Kim Jung-un); those who threatened our allies in Europe, annexed part of a free country and occupied another part of it, and seek to undermine the U.S. position in the world (Russian president Vladimir Putin); and with an array of other tyrants, including the president of Turkey and the prime ministers of Poland and Hungary.

b. He repeatedly alienated the heads of states that have served as important and reliable U.S. allies for many decades, including those of Germany and the UK.

d. He betrayed the Kurds, who fought valiantly to defeat the greatest terrorist threat the United States continues to face, ISIS. In the process, he led many nations to question whether they can trust the United States to honor the commitments it made to defend them and to maintain the liberal international order. Indeed, in response to his policies, many of these nations are seeking to move closer to Russia, China and Iran.

e. He shared highly classified information, obtained from an ally, with the Russians. As a result, this ally and others have limited the intelligence they provide to the United States.

2. He undermines the democratic institutions.

a. Many politicians embellish their record, engage in some puffery, and sometimes lie. Trump regularly and systematically lies to the public about what is happening in the world and what he did about it, thus greatly hindering democratic deliberations. The Washington Post’s fact-checker found that “[a]s of Oct. 9, his 993rd day in office, he had made 13,435 false or misleading claims” (October 14, 2019).

b. Trump attacks major sources of reliable information, repeatedly labeling them “fake news” and, worse, “enemy of the people,” seeking to delegitimize a major democratic institution, a free and vibrant press.

c. He seeks to undermine the public trust in another major source of reliable information, the intelligence services.

d. Rather than debunking conspiracy theories, he promotes them.

e. He repeatedly endeavors to delegitimize the work of the nonpolitical, professional part of the Executive branch, the civil service, by referring to it as a “deep state.”

f. Democracy relies on the underpinning of a culture of civility. Trump’s speeches and tweets greatly undermine that civility, which was already in ill repair.

3. He undermines the rule of law.

a. He has obstructed justice.

i. The Mueller Report cites ten instances in which the president obstructed justice, including several attempts to end the investigation being conducted by Robert Mueller and his team.

ii. Trump has obstructed Congress’s investigation by ordering all members of the Executive branch, including former employees, to refuse to testify before Congress and he refused numerous Congressional requests for documents. “President Trump and his Administration cannot participate in your partisan and unconstitutional inquiry under these circumstances,” wrote Pat Cipollone, White House counsel to the President, in a letter to Democratic House leaders (October 8, 2019).

iii. He sought to delegitimize the work of Congress by calling the impeachment process a “Witch Hunt,” “a COUP” and “a lynching.”

b. He is setting himself above the law.

i. Trump openly and repeatedly violated the most elementary concept on which the U.S. political system is based, that no one is above the law, there are no kings. He stated that “I have an Article 2, where I have the right to do whatever I want as president” (July 23, 2019). He promised to pardon officials if they circumvent laws in order to build the border wall (August 27, 2019).

ii. He stated repeatedly that he seeks to find and disclose the identity of the whistleblower, in direct violation of the law that protects their anonymity (September 30, 2019).

iii. He insists that people who work with him pledge and show their loyalty to him, not to the country.

a. He rejected the findings that the climate is deteriorating and that human activity is a major factor in causing this crisis, including a report by his own administration.

b. He withdrew the United States from the Paris Agreement.

c. He removed a large number of regulations that slowed down climate deterioration.

If the Democrats would draw up an inclusive bill of impeachment, whether it includes all of the items already cited or some similar list, I predict that the majority of the public will not accept that the acts listed are “what politicians do all the time” or do not amount to high crimes and misdemeanors. Hence will favor removal.

Democrats must respond to those who argue that we should wait for the election to deal with Trump by stressing that there are reasons to worry that it is not possible to have a free and fair election while the president is again seeking the help of foreign powers to sway the election in his favor. They should point out that the impeachment hearings will reveal facts voters would not know about without such hearings. And, while the House should make the bill of impeachment much more inclusive than it currently is, the representatives should realize that it need not be all-inclusive. Trump leaves so much evidence on the table, one need not include items that do not indicate that he is a clear and present danger to the republic.