What Should Trump Say during His Upcoming China Trip? 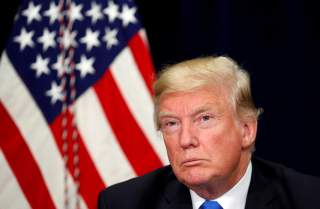 When President Donald Trump visits China next month, he will be subjected to the same blandishments that have influenced his predecessors ever since Richard Nixon opened the door to China. The pomp and ceremony and lavish Chinese hospitality will be intended to welcome, but also to ingratiate and intimidate the guest.

During the formal meals, we shouldn’t be surprised to see Xi Jinping—or better yet, Peng Liyuan, his wife—use his/her chopsticks to place morsels of fine food on the president’s plate. Henry Kissinger, in his book On China (it just looks like One China) has recounted how ancient Chinese emperors used that technique to show their visitors both their graciousness and their dominant position. Fittingly, one of the photos Kissinger chose for his book shows Chinese Premier Zhou Enlai personally serving him in that exact same that way.

But why shouldn’t Xi reciprocate the president’s hospitality at Mar-a-Lago in April—up to a point anyway. There, along with the chocolate cake, Trump served up fifty-nine cruise missiles in an attack on Syria for using chemical weapons against its people—something President Obama declined to do after Bashar al-Assad crossed the infamous red line. It wouldn't be the first time that Beijing greeted visiting U.S. presidents or other high-level U.S. officials with some demonstration of Chinese military prowess.

President Bill Clinton, having demonstrated American capabilities and will when he dispatched aircraft carriers during the 1995–6 Taiwan Strait Crisis, felt the need to get back in Beijing’s good graces when he visited China in 1998.

Despite public warnings about being seduced/intimidated into making concessions on Taiwan during his trip, Clinton could not resist the urge to try for a dramatic improvement in Sino-U.S. relations. He succumbed during his meeting with Chinese leader Jiang Zemin by announcing the “Three Nos” against Taiwan: no independence, no two Chinas and no one China/one Taiwan.

President Trump will inevitably be under similar pressure, both from the Chinese side and from Americans like Kissinger who invariably push for Washington to do ever more to placate Communist leaders, all in the name of not “hurting the feelings of the Chinese people.”

It will be argued that mere words constitute symbolic gestures which can please Beijing without costing the United States, or its democratic friend, Taiwan, anything significant. But that is simply wrong. Even tonal U.S. concessions will be read, in Beijing, in Taipei and in other Asian capitals,as a sign of American weakness—a faltering in the U.S. commitment to Taiwan.

The president should make no accommodating statements about Taiwan, and certainly should not consider a fourth communique—the first three did enough damage to Taiwan. Instead, Trump should be prepared to preempt Beijing with some pro-Taiwan declarations. He should emulate Clinton by announcing a new set of Three Nos, but this time they should be directed at China: no use of force or coercion against Taiwan, no blocking of Taiwan’s participation in all international organizations and no bribing or coercing countries to break relations with Taiwan.

Beyond Taiwan, and in keeping with the Chinese predilection for creative policy prescriptions by the numbers, Trump could also articulate the Three Don't Keeps: don't keep propping up the criminal North Korean regime and enabling its nuclear and missile programs; don't keep asserting aggressive and illegal claims in the South and East China Seas; and don't keep promulgating anti-American messages at home and abroad.

That kind of presidential visit would break the pattern and end by advancing the interests of the United States, Taiwan and the region, including those of a more sober and realistic China.