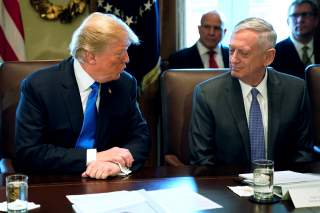 President Donald Trump is expected to release a public national security strategy soon. His critics will most likely hate it, no matter what it says. Some will simply ignore it, claiming that Trump will just keep being Trump, regardless of what is on paper.

Conversely, the president’s supporters will mostly say nice things about it—or ignore it. They trust in Trump. Like so much of the debate over foreign and defense policy these days, where you stand depends on where you sit.

But the rest of the world will read the document with interest. The Trumpian tweets and off-hand Oval Office comments have been notoriously unhelpful for those trying to divine the administration’s actual policies. Foreign friends and foes alike will use the strategy as a measuring stick to gauge whether the administration’s actions align with its newly published game plan.

In that respect, the strategy will be a valuable document. There is a “serious” Trump. The president gets really serious when making big decisions that affect the freedom, security and prosperity of Americans. The expectation is that Trump would not sign off on the strategy unless it comports exactly with how he intends to use the instruments of national power. Given that expectation, this is not a document to ignore.

Here is what the strategy won’t be. It won’t be just a laundry list of aspirational wants. That’s not Trump. He wants tangible deliverables. On the other hand, don’t expect a step-by-step list of everything the administration plans to do everywhere. That’s not Trump either. He doesn’t like telegraphing every move.

Further, the Trumpian approach to strategy doesn’t appear linear. The administration knows where it wants to go. It makes opening moves and then keeps its options open—while trying to steer action and policies in the same general direction.

Saying what it won’t be, however, doesn’t say what it will be. Most national security strategies are a mishmash of stuff—cramming everything the government wants to say about everything. It remains to be seen if this one is much different.

Having a strategy is a check-the-block exercise of the modern presidency.

Whether that strategy is any good… well, that’s another question.

Here are five elements to look for when trying to determine if the National Security Strategy is suitable, feasible, and pointing American security policy in the right direction.

1 - Focus on the big three—Asia, Middle East, and Europe. The rage today is all North Korea and Iran, but proliferation issues are a reflection of the larger strategic competitions driving geopolitics. The United States is a global power with global interests and responsibilities, but that doesn’t mean we should be equally concerned everywhere about everything. Asia, the Middle East and Europe are where most of our engagements, interests and concerns lay. If we can’t achieve a degree of regional stability in all three, Americans can never rest easy.

2 - Forward presence. America can’t lead leaning back on its heels. Today’s bad boy list hasn’t changed much since the eras of George W. Bush or Barack Obama. It’s still topped with North Korea, China, Russia, Iran, transnational Islamist terrorism and the transnational criminal networks (destabilizing Latin America and elsewhere). Bush policy was the most muscular—an overly ambitious effort to fix all the big problems once and for all. Obama’s was too timid—trying to walk away from the difficult, complex problems. Trump needs to find a middle course—pushing U.S. diplomatic, economic and military strength forward to protect and safeguard our interests. This will make the world a calmer—not a messier—place.

3 - Peace through strength. A strong national security strategy is a useless piece of paper unless the administration can build and sustain a military force that global power needs to be a global power. The administration needs to do that by squaring the circle—growing defense funding and the economy at the same time without driving the country deeper into debt.

4 - Friends and Allies. The White House has already said many times that “America First” doesn’t mean “America alone.” Indeed, bringing regional stability to key parts of the world requires friends and allies more than ever. The strategy has to reflect that priority—and direct that the policy be put into practice.

5 - The Fifth Dimension. No doubt the strategy will have something to say about how evolving technologies—from artificial intelligence to digital social networks—are reshaping the national security environment. But what is really key is not the technologies themselves but how they impact our most critical endeavors. America’s most critical advantage is its capacity to navigate freely across all the commons—land, sea, space, air and cyberspace. They are the pathways of economic development, the public square of freedom, and territory critical to our security. As technologies evolve, America and its friends and allies must retain the freedom and surety to operate in these commons.