What Some Fear an Iran Deal Could Mean... 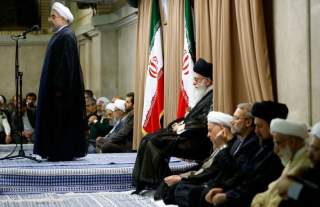 BEIRUT—The extension of nuclear negotiations between Shi’a Iran and world powers over Tehran’s illicit nuclear program and the prospect of a permanent deal are fueling fear among Sunni naysayers that extends far beyond nukes. A thawing of relations with the West through continued diplomacy may well go far in uniting minority groups in the Middle East with the same strategic interest: opposition to Sunni rule.

This scenario may not be far-fetched. For many Sunnis, the extension only plays into Iran’s geopolitical interests. They say the extension ultimately could result in warmer relations with Western powers in order for Tehran to continue supporting Bashar al-Assad’s regime in Syria, coordinate with world powers to retain a Shi’a-led government in Iraq, and keep pressure off Hezbollah in Lebanon in order for the party to prevent Sunni extremists from emerging inside the country.

In June, I was in Tripoli in northern Lebanon and several Salafist scholars expressed concern that Iran and Hezbollah might become allies of the United States if a permanent agreement were reached between Iran and six world powers, known as the P5+1. At the time, I dismissed this possibility as a typical Middle East conspiracy theory.

But when I returned to Lebanon in mid-July, I realized there was a well-thought-out analysis behind the alarm over warming U.S.-Iranian relations. The United States could be lured not necessarily by Iran specifically, but by what is being called a “coalition of minorities,” with Iran at the helm.

As Imad Salamey, a professor at Lebanese American University told me, many Sunnis are threatened by a fast-growing informal coalition that includes Shi’a, Druze, Alawites, Kurds, and in some countries, such as Lebanon, Christians—all of whom oppose Sunni rule that has dominated the Middle East for decades. Today, thirteen of nineteen states in the Middle East are ruled by Sunnis.

If this budding coalition of minorities could one day come together, they would enjoy a majority status that could threaten Sunni Arab supremacy. This marriage of convenience among non-Sunni groups could elevate the minority Shi’a into a much larger and powerful political force at a time when they are already ruling Iraq and Syria. As the largest Shi’a state, Iran has already taken the initiative by aligning and supporting the Shi’a political leaderships in Iraq, Syria and Lebanon.

Slowly, this idea of an Iranian-led coalition is becoming part of the public debate in the Arab world. A July 17 commentary in the newspaper Al Arab made the argument that a Western-Iranian alliance is aimed at dividing the region in order to weaken it. “Iranian policies in the region aim at weakening the Arab states surrounding it as much as possible in order for it to emerge as a leading power that is able to control the political, economic and vital paths in the Gulf and Egypt,” wrote Seifeddine Al-Ameri.

This emerging rainbow of identities crossing many borders might seem paradoxical during a period when religious and ethnic identities are more important and pronounced in the Middle East as a result of the Arab uprisings. With Iraq’s Kurds running what is in practice, if not in name, a statelet, Christians fleeing Egypt, Iraq and Syria to avoid religious persecution, and sectarian Shi’a and Sunni militias forming in many Arab countries, it would seem impossible for this group of diverse minorities to forge a working relationship.

But the emergence of the Islamic State, formerly known as the Islamic State of Iraq and Syria, its capture of territory in Syria and Iraq, which could redraw the postcolonial borders of some Arab states, the increasing number of extremist Salafist groups, and the marginalization of moderate Sunni leaderships are causing non-Sunni minorities to be fearful of Sunni power and vice versa.

Alarm over such a coalition exists among non-violent Sunni salafists and political leaders. “Syria and Iraq are proof that they (Shi’a) are trying to undermine the Sunnis,” said Dai Al Islam Al Shahhal, an influential Salafist leader whose father founded the Salafist movement in Lebanon in the 1950s.

“The Americans have committed a historical scandal because they are willing to undermine the Sunni. American fear of the Sunnis caused them to support the minority—the Shi’a,” Shahhal said in an interview in June at his Tripoli home, protected by armed bodyguards. Shahhal says he has received threats from the Syrian intelligence.

Another school of thought is that Iran wants the negotiations to be drawn out for its own strategic reasons in the region, but has no intention of signing a permanent nuclear agreement. During the period of negotiations, Iran will use the time to appear to be cooperating with world powers as it pursues its interests in the Arab world. On July 20, Iran and world powers agreed to continue the nuclear negotiations for four months with the hope of reaching a deal.

Writing in the Saudi newspaper Al Sharq al Awsat, Jordan’s Minister of Information, Samih Maatah said: “. . .I do not see any future agreement between the major powers and Iran regarding its nuclear program, not because an agreement would be difficult to reach, but because Tehran wants the project to act as a platform from which it can advance its interests in Syria, Iraq, Lebanon and the Gulf.”

Such concerns have much credibility. Iranian officials have stated publicly in recent months that they hope success on the nuclear file will pave the way for negotiations with the West on other “issues,” meaning Iraq and Syria. Given Iran’s long-standing expansionist objectives in the Middle East and the rise of Sunni extremism, which makes an Iran-led coalition attractive, there is reason for Sunni concern.