What the European Union Should Do to Help Ukraine 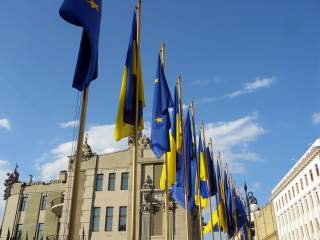 To date, the European Union (EU) has played a key role in the current crisis in Ukraine. Former Ukrainian President Viktor Yanukovych’s decision to suspend the negotiations for an Association Agreement with the EU launched the protests on the Maidan that led to his flight to Russia. Since the Russian occupation of Crimea, the EU has participated with the United States in the Geneva process and joined the United States in sanctioning Russia. In addition, the EU has announced that up to 11 billion euros “could be made available over the next years” to support Ukraine’s political and economic reforms. Earlier this week, European Energy Commissioner Guenther Oettinger helped facilitate meetings between the Ukrainian and Russian energy ministers and their gas companies. This has led to the postponement of Gazprom’s decision to require prepayment for gas supplies beginning on June 1 and is leading to further discussions between the companies.

There is still more the EU can—and should—do. I would offer two ideas that would be most helpful:

First, on September 4, 2012, the European Commission began an investigation to determine if the Russian gas company, Gazprom, “might be hindering competition in Central and Eastern European gas markets, in breach of EU antitrust rules.” The Directorate General (DG) for Competition “is investigating three suspected anticompetitive practices in Central and Eastern Europe,” including hindering the free flow of gas across member states, preventing supply diversification, and possibly imposing unfair prices. Competition Commissioner Almunia is quoted referring to the “huge divergences in prices” charged by Gazprom within the EU.

It is time for DG for Competition to bring this investigation to a conclusion. If Gazprom has been violating EU antitrust rules, the Commission should not hesitate to fully enforce these rules, just as it has done with companies from other non-EU states, including big-name American companies. For example, the European Commission forced Microsoft to change some of its business practices and to pay an 860-million-euro fine. Google reached a settlement with the Commission earlier this year on its pending case that will require it to change how it displays certain search results. While the resolution of the Gazprom investigation is a legal issue and its application should be based on the facts and not be a part of any sanctions, Guy Chazan and Alex Barker, writing in the Financial Times, recently predicted that “the (EU) probe could result in heavy fines or force Gazprom to overhaul its business practices across the EU in order to comply with the bloc’s antitrust rules.” In addition, Commissioner Oettinger’s discussions show how central energy issues are to the dispute between Ukraine and Russia.

Second, in the Maidan and beyond, Ukraine has opted to move west. As I understand it, this precludes any Ukrainian membership in Putin’s Eurasian Customs Union. However, it does not preclude building mutually beneficial economic relations with Moscow—perhaps as significant as a free-trade agreement. Thus, once Ukraine’s Association Agreement with the EU is successfully concluded, there may well be a role for the EU—similar to the role Commissioner Oettinger has been playing—in helping build these mutually beneficial relations between Ukraine and Russia. Perhaps, when the time is ripe, the EU can help build this off-ramp.

Twenty-five years ago, the G-7 Summit in Paris gave the European Commission the role of coordinating G-7 assistance to Poland and Hungary—and eventually, to all the countries of the former Warsaw Pact. The Commission’s efforts proved to be a great success in many of those countries. With its European Neighborhood policy and Association Agreements, the EU is continuing this work. We need the EU to continue to play a key role, as it did twenty-five years ago, in solidifying Ukraine’s place in Europe and helping it build a positive relationship to its east. The EU has faced a series of challenges in recent years, with disappointing referenda and its current economic malaise. At the same time, enlargement has been a great success. Ukraine provides the EU with an opportunity to build on that success.

John A. Cloud is currently on the faculty of the U.S. Naval War College. He was U.S. Ambassador to Lithuania from 2006 to 2009. The views expressed are his own and do not reflect those of the Navy or the U.S. government.