What the Ferguson Report Really Exposed 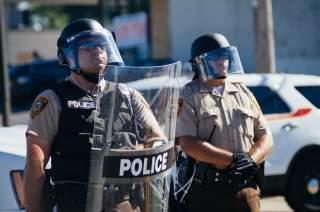 We’ve all seen them—the unsolicited, chain emails that occasionally dump tasteless or racist jokes in our inboxes.  I delete them immediately.  End of story.

Yet, somehow, the media has obsessed over the (admittedly noxious) emails found in the files of a few individuals in the Ferguson, Mo., Police Department. The emails were noted in a March 4 report issued by the Special Litigation Section (SLS) of the Justice Department’s Civil Rights Division. That report employs some rather dubious statistics to claim a “pattern and practice” of discriminatory behavior by the Ferguson Police Department.

The SLS report grabbed headlines and sparked renewed protests in Ferguson.  It also obscured what is perhaps the most important finding regarding the shooting death of Michael Brown back in August 2014 – namely, the complete exoneration of Officer Darren Wilson.

Fervor generated by the “pattern and practice” report blinded much of the country to the second report issued that day by the Civil Rights Division’s Criminal Section. It clearly confirms the validity of the local grand jury’s decision not to indict Officer Wilson last November.  It also belies the media-propagated myth that Michael Brown was shot in the back while trying to surrender with his hands in the air.

That storyline was a total fabrication conjured up by dishonest witnesses who lied to the police and reporters.  Many of the witnesses “who originally stated Brown had his hands up in surrender recanted their original accounts, admitting they did not witness the shooting.” [Emphasis added.]  Critically, DOJ’s investigation “did not reveal any eyewitness who stated that Brown said ‘don’t shoot.’” [emphasis added.]

In fact, witnesses confirmed that Officer Wilson was attacked by Brown.  They testified that Brown “reached into the [police] SUV through the open driver’s window and punched and grabbed Wilson” before struggling with Wilson to try to gain control of the officer’s gun. That testimony was corroborated by the physical and forensic evidence.

But many of the witnesses—particularly those from the neighborhood where Brown’s family lived—were afraid to give formal statements to law enforcement that would support Wilson’s account. The report calls it “fear of reprisal.” In other words, vigilante justice – intended to make sure the real story of what happened did not see the light of day – was alive and well in the neighborhood that Eric Holder, Al Sharpton, and others visited with their message about a supposedly racist criminal justice system.

But what about that other report, the one issued by the SLS? According to Peter Kirsanow, a member of the U.S. Commission on Civil Rights, it is “so replete with conclusions unsupported by facts, so lacking in basic methodological rigor,” that it “is an embarrassment.” The report claims, based on statistical disparities, that the Ferguson Police Department (“FPD”) engages in “intentional discrimination on the basis of race.” It asserts that the investigation “revealed a pattern or practice of unlawful conduct…that violates the First, Fourth, and Fourteenth Amendment…and federal statutory law.”

To justify that claim, the report says that from 2012 to 2014, “African Americans account[ed] for 85% of vehicle stops, 90% of citations, and 93% of arrests made by FPD officers, despite comprising only 67% of Ferguson’s population.”  Does that mean that the FPD is engaging in intentional discrimination?  Or is the Justice Department failing to take into account the unfortunate fact, reflected in numerous studies (including data from DOJ itself), that African Americans commit crimes and routine traffic violations at a much higher rate than whites, Hispanics or Asians?

According to the U.S. Census, Missouri has a black population of 11.7%.  Yet according to a 2012 report by the Missouri Statistical Analysis Center of the Missouri State Highway Patrol, blacks represented 60.5 percent of all murder arrests.   They also represent 55 percent of murder victims in the state, which means that African American criminals are in large part preying on other African Americans.  According to the Justice Department’s own statistics on homicides nationwide, “the offending rate for blacks” is “7 times higher than the rate for whites.” African Americans were also 6 times as likely to be the victim of homicide as whites.

It is also a sad fact, as pointed out by Commissioner Kirsanow, that according to various studies, including data collected by the U.S. Civil Rights Commission, African Americans commit “various types of traffic offenses – including speeding, driving under suspension, DUI, and running red lights and stop signs – more often than drivers of other races.”  In just one routine traffic area alone, the Justice Department itself says that “seatbelt usage is chronically lower among black drivers.”  Thus, according to DOJ, if “a law enforcement agency aggressively enforces seatbelt violations, police will stop more black drivers” simply based on “differences in offending” rates.

Citing a study in Savannah, Ga., DOJ says that the “results did not support the perception that a high level of discrimination occurs prior to a traffic stop.”  Another study in Cincinnati that matched traffic stops “involving black drivers with similarly situated white drivers…found no differences.”  A New Jersey study found that black drivers violate speed laws at a higher rate than white drivers, which was a “plausible explanation for the findings that Black drivers are represented among traffic stops at a higher rate than they are represented in the population.”

As the Manhattan Institute’s Heather MacDonald points out, DOJ’s claims “are meaningless as a measure of police behavior, unless one considers the underlying rate of traffic offenses.  If blacks are disproportionately represented among speeders, red-light runners, and drivers without updated vehicle registration, say, then their higher rate of being stopped simply means that the police are applying the traffic laws neutrally to lawbreakers.”  A little noticed footnote in the new report, no. 53, says that the so-called “disparity index” in Missouri that shows the percentage of traffic stops of racial groups is “even higher” for the entire state than it is in Ferguson.  This throws even more substantial doubt into SLS’s claims that individuals in Ferguson are being treated differently by law enforcement based on their race, as opposed to the fact that they are breaking the law, no matter their race.

The disparate impact legal theory SLS uses to claim a violation of federal law doesn’t stand up to scrutiny.  SLS gets its jurisdiction to investigate police departments from 42 U.S.C. § 14141, which bans law enforcement from engaging in “a pattern or practice of conduct” that “deprives persons of rights, privileges, or immunities secured or protected by the Constitution or laws of the United States.”  This is a very high legal standard that requires intentional and knowing conduct, something that SLS tries to prove in large part through disparate impact.

Many of the claims made by SLS in the report constitute the view of DOJ lawyers who believe that, as federal bureaucrats, they somehow know how police should ensure public safety better than the police themselves.  For example, SLS complains about an officer who broke up “an altercation between two minors and sent them back to their homes.”  The officer told one of the minors to stay in her home and not return to the other minor’s house. But the two minors got into a fight again outside the first minor’s house, and this time the same officer arrested them both for a “failure to comply” with his earlier order.

What the officer did seems perfectly reasonable.  He didn’t arrest the minors the first time he was called to the scene; instead, he gave them a chance to cool off and not get arrested.  But what may seem like common sense to us is not common sense to SLS.  No, the report faults the officer for arresting the minors without probable cause.  That is one of the incidents that constitutes a “pattern or practice” of violating the Fourth Amendment.  Rest assured, if these sorts of allegations were held up to scrutiny – say, before a jury – many would be quickly refuted.

The SLS also claims that the FPD shows “insufficient sensitivity” to those with mental conditions.  Talk to any police officer, and he or she will tell you how dangerous (and unpredictable) people with mental conditions can be, particularly when officers don’t know about the condition and cannot instantly diagnose it.  SLS complains about a mentally ill man who died after he was shocked three times by Ferguson police officers.  The man, who “had been running naked through the streets and pounding on cars that morning while yelling ‘I am Jesus,’” ran toward an officer swinging his fist.  A tragic result obviously, but the officers were trying to stop someone who wasn’t responding to the shock tool they were trying to use to avoid pulling out their guns and using deadly force.

What SLS really found is that, like a lot of other small towns across America, “Ferguson’s law enforcement practices are shaped by the City’s focus on revenue rather than by public safety needs.”  With that as its focus, the SLS criticizes not just the FPD, but city managers and the procedures used by the local court system.  For those of us who have driven through speed trap towns, we understand what that means.  As distasteful as that is, as unfair as we may think using traffic violations or “aggressively enforce[ing] the municipal code” to raise revenue may be, that type of behavior does not amount to a “pattern of unconstitutional policing” or intentional racial discrimination.