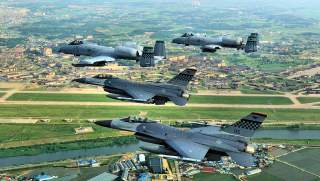 This year, record numbers of Americans voted for Libertarian candidates. The Libertarian presidential nominee, Gov. Gary Johnson, received over four million votes, three times the previous record. For perspective, four million votes is about the voter turnout in a state the size of Virginia. He did this without the tremendous funding and free media attention that Clinton and Trump received.

Notably, Johnson was very popular in multiple polls of active-duty military. One can reasonably theorize that this is because of Gov. Johnson’s stance on the use of military force. Gov. Johnson advocates limiting the use of our military by withdrawing from regional conflicts and focusing purely on defense.

Indeed, after fifteen years of highly active involvement in the Middle East, many of our most devoted military personnel are tired and questioning the effectiveness of our continued involvement in these types of struggles. Fifteen years ago, American leaders thought that the U.S. military could topple a foreign government, clean things up, install new leadership and leave successfully. Our military is very powerful and capable of many things, but leaders overestimated the very complex challenge of nation building.

Now that we have seen first-hand how challenging that truly is, American leadership should and must re-evaluate our military and foreign policy strategy and tactics.

The Libertarian Party defaults to liberty. We want people to be free to make their own decisions without interference from the government and we think that the only proper role of government is to defend people from force and fraud.

As President-elect Trump lays the foundation of his presidency, we ask him to use the change in administrations — as presidents in the past have — as an opportunity to open new doors and hit “refresh” on various critical topics around the world.

For decades, the United States has over-prioritized the use of military force as a tool in foreign affairs. The reasons for this are simple. Firstly, we have a very powerful military. Secondly, Americans understand the use of military force. It is visible. Voters want visible action. Other tools for international influence are less visible and less understood by voters. And since we live in a democracy, our leaders, rightly or wrongly, cater to what resonates with voters.

Instead, diplomacy should be the first tool in foreign affairs. Military force should be reserved for truly urgent and defensive measures. We ask that President-elect Trump prioritize diplomacy from the very beginning of his presidency. Diplomatic relationships take time to develop and he should invest in them long before a crisis occurs.

We suggest that American diplomacy at this time should be more focused on listening than talking. We encourage President-elect Trump to engage in respectful diplomacy with nations and people across the globe and listen thoughtfully, especially to those who have grievances.

In his Farewell Address, President George Washington famously spoke against permanent enemies. This is a timeless lesson and we call on President-elect Trump to listen. The United States should have no permanent enemies. Where there has been past ill will or bloodshed, we should consider how we can move forward in a more harmonious direction.

President Washington also warned against permanent allies. “The nation which indulges towards another a habitual hatred or a habitual fondness is in some degree a slave.” Let us not be hostage to how things have been done in the past.

President Washington also warned against “foreign influence.” We encourage Trump to also heed this warning and to be wary.

Focus on Threats that Can Truly Harm the United States

Given the nature of modern warfare and geography, America is highly unlikely to be attacked with a conventional force. We are, however, vulnerable to cyber attacks and bio-chemical attacks. We recommend a refocusing of our military to better defend Americans from likely and potentially devastating threats such as these. This can be done with the same budget or even a reduced budget.

We recommend that President Trump and Congress:

• Drastically reduce our military presence abroad, closing bases that are costly and even counterproductive;

• Greatly reduce or end offensive measures such as drone-strikes that arguably create more terrorists than they kill;

• Ensure that our critical defensive technology such as anti-ICBM technology is the best in the world.

We need to focus our manpower and resources on fending off actual threats and not on offensive actions that create more future threats.

America has long considered herself to be a beacon of freedom for the world. Sometimes we live up to aspects of that lofty ideal. Often we fall short. We ask President-elect Trump to refocus our interactions abroad to better align with that noble vision.

This means a respect for human rights of all people, including our enemies. This means treating foreign populations with respect. This means ending our intrusion into places where we have no right to intrude. This means being fair to all countries, regardless of our past history with them.

To do this, we must analyze both our goals and methods through the lenses of liberty, fundamental human rights and decency. When we turn a blind eye to our methods in the name of our higher goals, or vice versa, we undermine our cause. For example, if our goal is to end violent terrorism in the Middle East but we use torture in an effort to do that, then our actions have undermined our larger goal because our actions were not consistent with human rights and thus will likely generate even more terrorists.

If our goal is to reduce threats to the United States then avoiding circumstances that create more threats and enemies should be a priority.

With a revamping of our foreign policy to focus on defense rather than offense, and with modern warfare technology being what it is, we simply do not need foreign bases in countries that do not overwhelmingly welcome our presence. Closing bases where they are not welcome or needed can be a meaningful step towards improving relationships and allowing us to focus our resources on true threats.

The War on Drugs is often considered a domestic issue but, in truth, it also plays a major role in our foreign affairs and needs to be addressed, in part, that way. The same is true with immigration.

President-elect Trump says he wants to decrease the waves of immigrants coming to America from Latin and South America. The best way to do that is to end the War on Drugs both within our borders and in other countries.

The sordid truth is that America's drug laws are responsible for much of the violence and crime in Latin and South America and that violence is driving many immigrants northwards. Our drug laws have created a massive black market that has spawned drug cartels and made them rich, powerful and violent. Our very own drug laws are why so many Latinos are desperate to come to the United States.

After forty years, the drug war has done more harm than good. It has cost over a trillion dollars. It has not been effective at decreasing Americans' access to illegal drugs. It has put countless non-violent offenders in jail to the point where violent offenders are released because there is not enough space for them. It has empowered and emboldened violent drug cartels. And, it has forced Latinos to flee northward to the United States.

President-elect Trump has advocated building a wall along our border in order to control immigration. Such a wall would not work. Walls cannot stop desperate people fleeing for their lives. Walls also cannot stop drug cartels. Such a wall also ignores the humanity we all share. Note the similarities between such a wall and the notorious Berlin Wall, meant to separate people and control them. A free people should never allow such a wall to be built in their name.

If President-elect Trump truly wants to solve "the immigration problem," he should end the War on Drugs.

The best foreign policy is based on “do unto others as you would have them do unto you.” If we pursue strategy and methods that are consistent with that precept, we will start to attain a position as the “beacon of liberty.” Existing threats will dissipate. Americans will be safer abroad and domestically. And we’ll be able to refocus our military on true defense.