What the Sanctions Really Mean for Russia 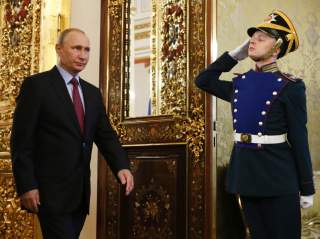 If there’s one thing that the overwhelming majority of policymakers and experts in Moscow and Washington now agree on is that the current crisis in U.S.-Russia relations is spiraling in its character, systemic in its nature and lingering in its resolution prospects. The rest of the discourse is ripped between narratives of who’s to blame for what and interpretations on just how reasonable the U.S. sanctions are or asymmetric Russia’s response is.

In Moscow the rather self-implanted promise for a pragmatic interest-based engagement under the new administration is gradually transforming into U.S. fatigue. While the Kremlin is brainstorming ideas on how to counter political, economic and possibly geopolitical implications of what it sees as the “unrestrained Russophobia” in Washington the expert community is divided in making sense of what role the U.S. president could have played in halting the new round of sanctions. Most share a view that President Trump simply wasn’t able to do anything constructive given the “witch hunt” he and members of his team have been undergoing due to the Russia probe. Others opine that he is simply siding with Congress to find solid excuses for not trying to normalize the relations on the U.S. side. Also, the sanctions in many ways help promote his Make-America-Great-Again objectives, which include increasing U.S. gas exports to Europe and boosting the U.S. military. Both camps seem to agree that whether deliberately or under pressure president Trump made a grave mistake by letting foreign policymaking vis-à-vis Russia be outsourced to the Hill, which tends to take a more hawkish stance towards Moscow.

For the legislative branch, Russia became lubricant for the seemingly dysfunctional congressional machine; a rare unanimity in both the Senate and the House was demonstrated on the sanctions vote against a backdrop of the debate on the Obamacare repeal or tax reform. Not only do the sanctions “remove the flexibility and leverage that a president could have in dealing with Russia,” as Angela Stent accurately argued, but in the eyes of Russians, Trump is gradually losing control of key decisionmaking, getting weaker politically and becoming increasingly non-contractual. The sanctions are, among other things, a sign that legislators still distrust the president and want to play it safe by stripping him of any hypothetical opportunity to concede to the Russians. This, in its turn, closes window on the scale of concessions and offerings the Kremlin was willing to negotiate with the White House on its part half a year ago.

Another important takeaway from the sanctions for Moscow was that the implications it could have for the conflict in Ukraine. While the first wave of sanctions was designed to punish Moscow for its actions in Ukraine, the basis for the new sanctions package, instead, seemed to be aimed at Russia’s competition with the United States in the areas of energy and arms sales. Many decisionmakers in Moscow believe that Washington doesn’t truly care whether it complies with the Minsk agreements and that compliance is unlikely to affect the sanctions anyway.

In other words, those who initially believed that Moscow had little incentive to be cooperative on the conflict in the east Ukraine are now even less interested in settling that conflict on terms other than its own. The potential U.S. response in the form of supplying more weapons to Kiev would mean more pressure over Moscow that would ultimately have to retaliate. All of this erases dim prospects for a bilateral U.S.-Russia framework on the Ukraine conflict settlement and is seen in Moscow as undermining the work of the contact groups and the Normandy format even with all of its own dysfunctionalities.

To paint a broader picture, Russia and the United States are now in a situation where confrontation can twist in ways that are difficult—and possibly impossible—to forecast. The asymmetry of actions and counteractions are becoming so senseless that it is not really clear whether policymakers who are rushing to use sticks fully understand the consequences that come along with them. If perhaps they do, then we probably are in for a much worse future.

What is also important is that the sanctions—and Russia’s subsequent retaliation, as well as a likely response from the administration to follow Russia’s countermeasures—alter the paradigm of the U.S.-Russia relations. The two superpowers may now be doomed to conflict with one another in a space that leaves little room for reasonable interaction. “Managing confrontation,” which has been a suggested modus vivendi in both capitals over the recent months, and which I myself was an advocate, seems to no longer be relevant either. In fact, there are enough potent policymakers in Moscow and Washington tempted to let the steam out and willing to let confrontation get out of control.

The uncomfortable truth, which Moscow has begun to accommodate, is that there’s no way for the sanctions to be rolled back in the foreseeable future. But the sanctions—albeit painful as they are to the Russian economy—aren’t delivering for the United States that for which they were initially intended. Russia’s behavior won’t change. Sanctions can make life more miserable for the Russians in some aspects, but it will not change the regime. On the contrary, the sanctions are likely to help push for more social anti-Americanism in Russia and steady substitution of American products (Hollywood movies are already being substituted on Russian central TV by national series and French films). Opting for self-isolation, however, is exactly where Russia would lose on the sanctions, so finding a right balance would be a challenge for Putin.

The sanctions are the beginning of a new stage that will likely entail even fewer U.S.-Russia contacts on all levels. The sanctions will also lead to program cuts and the augmentation of information bubbles. Russians today don’t understand why the theme of the Kremlin’s involvement in the U.S. elections has triggered such a strong reaction in Washington. Most of them believe that the allegations of election interference are bogus, and those who do recognize “the Russia hand” don’t see it as anything beyond a standard foreign-policy intelligence practice, which, in the words of one Kremlin official, “the U.S. exercised on Russia since early years of the breakup of the Soviet Union through various NGOs, political advises and via undercover diplomatic channels.” “If Putin wasn’t Yeltsin's protégé himself it might have made sense to see him initiate investigations of the U.S. involvement into Russian elections of 1996,” the official said.

Russia was busted for attempting to find “entry points” to the new administration, and later exposed and fully exploited because the country is an “ordinary adversary” for the American political elite. This perception in Moscow is deeply rooted and will only be reinforced with time. Similar—if not stronger—narratives are being shaped in the United States that are there to stay for years. Perhaps, in time, we may learn that other foreign actors were doing the same thing though via different techniques.

It matters little at this point whether Russia is able to find a strong response to the sanctions, one that saves face, inflicts pain on the United States and looks good to third parties observing the conflict. It likely will not, and if it does, then at the end of the day all of the measures that go beyond the expulsion of U.S. diplomats in Russia, to a bigger or lesser, are equivalent to Russia shooting itself in the foot. Sanctions are an effective punitive measure that the United States feels it can afford to use since it is superior in practically every aspect to any counteragent. But as more countries fall under the U.S. sanctions, and even more are obliged to support them under ally obligations, the practice is being perceived dangerous. More people in China, Turkey, India and Russia are calling to herd together to stand up to the sanctions, which, in the long run, may undermine America's international reputation and push countries to pivot away from the United States.

When Russia seeks to address an outside pressure—judging by the pattern of similar incidents over the last years—it tends to up the ante. With the expulsion of American diplomats—thus equaling the diplomatic corps of the U.S. mission in Russia to that of Russian in the United States (455 people)—Moscow, in the words of Deputy Foreign Minister Ryabkov, “wants to draw the line under what has been done in recent weeks of the Obama administration.” Russia doesn’t seek to further exacerbate the situation even though all possible scenarios are being considered. By the end of the year it will be obvious if the White House and the Kremlin are able to “come to their senses,” as President Trump tweeted in April, or if they get carried up to new confrontational heights by the inertia of the ongoing crisis.

Maxim A. Suchkov is the editor of Al Monitor’s Russia-Mideast coverage and an expert at the Russian International Affairs Council and the Valdai Discussion Club. He was previously a Fulbright Visiting Fellow at Georgetown University’s Center for Eurasian, Russian and East European Studies and Visiting Fellow at New York University. You can follow him on Twitter at @Max_A_Suchkov.