What the Shakeup in Buenos Aires Means for Latin America 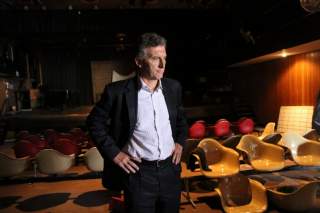 Just a month ago, in a land where all politicians cloak themselves in the comfortable smock of peronismo, it seemed improbable.

Yet Mauricio Macri—the son of an Italian entrepreneur, himself a businessman before entering the world of Argentine politics, a one-time owner of the Boca Juniors soccer team and, of course, the accomplished outgoing two-term mayor of Buenos Aires, the cosmopolitan capital of the country he is now set to lead—made his peace with peronismo en route to the Casa Rosada, the presidential palace that he’ll now call home for at least the next four years.

Macri narrowly won the Argentine presidency in a runoff Sunday evening, the first runoff campaign since the return of Argentine democracy and the end of military rule in 1983. His victory brings to an end three consecutive terms by two presidents, the late Néstor Kirchner and his widow Cristina Fernández de Kirchner that, together, put a decidedly socialist stamp on the face of twenty-first century peronismo, charting a statist course for the country’s economy, shutting it out of global debt markets and nationalizing everything from Argentina’s pension system and airlines to its largest oil company, all in a quest to fund its anti-poverty and welfare programs.

Global investors are taking note—and with good reason. Macri’s victory represents one of the sharpest turns in Latin American politics this decade. If he is successful, he could remake regional politics for years to come; if he fails, voters might easily double down on the kirchnerista left.

Macri, Buenos Aires’s moderate, business-friendly mayor, pulled ever more to the center during the marathon presidential campaign against the kirchnerista candidate, Daniel Scioli, a former vice president and the outgoing governor of the sprawling Buenos Aires province. Though Scioli narrowly led voting in August’s “jungle” primary and the election’s first round on October 25, the runoff gave Macri, leading a broad center-right coalition called Cambiemos (Let’s change!), the chance for a direct challenge to twelve years of Kirchner rule.

But Macri’s shifts to the center were so unwieldy that rivals taunted that the only “change” Macri promised were in his day-to-day stands on the issues. By the eve of the first round, Macri had promised not to re-privatize the state oil and airline companies, and on the eve of the runoff, Macri made a blatant bid for disaffected Kirchner supporters. When Macri unveiled a statue of Argentina’s legendary twentieth century leader Juan Péron in Buenos Aires during the campaign, he all but embraced the legacy of peronismo. (That, perhaps, is not so difficult, given that over the course of his own career, Péron shifted from a pro-labor leftist into an autocratic nationalist). Among an electorate where memories of the brutal currency crisis of 1999-2001 have made ‘neoliberalism’ an impossibly difficult sell, Macri’s shift to the middle was politically crucial. Throughout the runoff, Macri pledged that his administration could be just as effective at reducing poverty as kirchnerismo. A successful Macri administration will be expected to show progress on Kirchner’s popular anti-poverty and social welfare goals while bringing a more orthodox economic perspective to boost Argentine growth and investment.

While predictions of a 180-degree turn to neoliberal ‘shock therapy’ are farfetched, Macri’s victory represents a clear rupture with the past and the first clear repudiation of kirchnerismo since the rise of the Kirchners in 2003. Like it or not, Macri’s victory in Argentina, one of Latin America’s three largest economies, looks to resonate across Latin America in at least three important ways.

First, a gradual end to capital controls in Argentina will reignite interest in foreign investment.

For years, the official value of Argentina’s peso and its real ‘blue dollar’ value have widely diverged. Today, the difference is perhaps as much as 40 percent, due to capital controls that have limited the flow of capital out of the country—and U.S. dollars into the hands of everyday Argentines. It was clear, even to many diehard kirchneristas, that the next Argentine president would have to eliminate capital controls sooner or later to bring the currency’s value back in line with its real value. Even Scioli indicated he would work to remove controls gradually.

Macri, untethered to the kirchneristas, will be in a position to carry out his promise more effectively. That will not necessarily be easy, because it will mean a forced devaluation of the peso’s currently inflated value. That means consumer prices will increase even further, problematic for an economy in which inflation has been an endemic problem during Kirchner’s rule. No one knows precisely the extent of Argentina’s inflation because Kirchner’s government fiddled with the numbers; among other reforms, Macri hopes to introduce more transparency and professionalism in the production of national economic statistics.

A real devaluation, however, will also come at a time when Argentina’s neighboring economies in Brazil and Chile are facing troubles. Subdued global demand for oil and other commodities (including Chilean copper) are pushing Brazil and the so-called Southern Cone economies into recession, and economic forecasts are even gloomier for 2016. Brazil, furthermore, is enduring a crisis regarding corruption within its state oil company, Petrobras, and more widely among the political class. The impeachment of Brazilian president Dilma Rousseff cannot be ruled out.

Though he has promised to lift capital controls gradually, controlling Argentina’s period of adjustment, Macri’s interest will be to push as quickly as possible. Without a majority in the congress, he will need all of the political goodwill he can get in his honeymoon period to push through difficult legislative priorities. He will also need the support of a breakaway group of reform-minded, pro-business peronistas led by Tigre mayor Sergio Massa, a one-time Kirchner ally. Massa’s “Renewal Front” will be generally supportive, at least for now. More importantly, Macri will be anxious to frontload any economic pain earlier rather than later in his administration. While he might be able to survive midterm elections in 2017, a drawn-out recession could jeopardize his hopes for reelection in 2019, when he may well face a still popular Kirchner, who will no longer be subject to the term limits that forced her to step down in 2015.

Second, Argentina will make a deal to return to the debt markets for first time in over a decade.

One of the reasons that Argentina has been in such dire straits over the past decade is its refusal to settle with the final group of creditors stemming from Argentina’s 2002 debt default. Through a long and arduous legal dispute that ended with a jurisprudentially perplexing ruling in the U.S. Supreme Court, Argentina still finds itself a renegade in the financial markets, unwilling to pay a group of U.S. hedge funds that acquired the Argentine bonds after the default. Politically, the legal wrangling has all been to Kirchner’s benefit, giving her a comically easy target—imperialist vulture funds out to fleece Argentina and impoverish its people.

But Macri will have to find some accommodation with the creditors if he wants Argentina to access global debt markets, relieving the pressure that’s forced Kirchner increasingly to raid pensions and nationalize wholescale industries to obtain foreign reserves and funds for her often lavish spending. As with ending Argentina’s capital controls and a looming devaluation, Macri has an incentive to put any settlement with American ‘vulture funds’ behind him as quickly as possible, because the kirchneristas in opposition could use it to paint him as a neoliberal boogeyman or, at worst, a traitor to his country.

Access to financial markets may not necessarily spur a Macri-led spending spree, but it will be a powerful signal to global investors. The message: Argentina is once again open for business. Argentina, a powerful regional market, could draw more than a decade’s worth of pent-up investment. The country’s stock market had been surging ever since Scioli’s disappointing win on October 25, gaining around 25 percent since the first round, and Macri’s win sent it climbing higher on Monday.

In the short term, however, Macri’s success might have its largest effect outside Argentina’s borders, most notably in Venezuela. Kirchner served as a vital link between the populist left, personified by Cuba’s Castro brothers and Bolivia’s Evo Morales, and the more pragmatic left, personified by former Brazilian president Luiz Inácio Lula da Silva and current Chilean president Michelle Bachelet. With fresh elections due next year in Peru and the Dominican Republic, and with Mexican, Colombian and Brazilian elections due in 2018, ‘Macrinomics’ could yet come to define the regional economic agenda.

Kirchner’s departure, however, will hit hardest in Caracas. While her government has been more respectful of democracy and the rule of law than Venezuela’s, Kirchner has nevertheless been one of the leading apologists for Venezuela’s increasingly desperate chavista regime. It comes at the worst possible time for Venezuela’s president Nicolás Maduro, whose ruling United Socialist Party of Venezuela (PSUV) will face an angry and divided electorate on December 6, when voters elect a new National Assembly. By most estimates, Venezuela’s long-suffering opposition should win those elections; in April 2013, challenger Henrique Capriles very nearly defeated Maduro in the presidential race to succeed the late Hugo Chávez.

Kirchner will peacefully transfer power to Macri’s administration, though the kirchneristas will do everything in their power to thwart Macri from the opposition benches. In Venezuela, by contrast, Maduro and the chavistas have arrested and detained many opposition leaders on political charges, including one of the most charismatic opposition voices, Leopoldo Lopez, and former Caracas mayor Antonio Ledezma. Maduro’s government has registered alternative parties with similar names to opposition parties to confuse voters, cowed what’s left of Venezuela’s independent media and intimidated and harassed opposition supporters in what might be the world’s worst-performing economy today. Runaway inflation, depressed oil prices, obsolete and decreasing oil production, widespread graft among the military and chavistas alike and a shortage of dollars and imports make Argentina’s economy look sanguine in comparison.

After years of eroding the line between chavismo and the state, no one expects the December 6 vote to be free or fair. Even if the opposition overcomes these disadvantages and wins a majority in Venezuela’s national assembly, no one even knows if they will be able to exercise any real power, because Maduro can use any number of legal tricks to consolidate ‘emergency’ powers within the presidency.

If, as expected, Maduro and the ruling chavistas cling to power in the aftermath of the December legislative elections, Macri’s democratic victory will further highlight how Venezuela’s rulers have hollowed out its democratic institutions and the rule of law.

Kevin A. Lees is an attorney in Washington, DC, and the editor of Suffragio.org.