What the Soviet Defeat in Afghanistan Tells Us about Syria 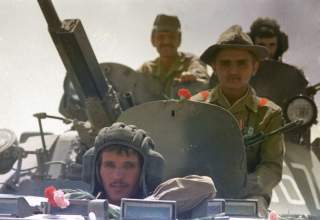 Al-Julani is an opportunist. He saw the potential for Russian-U.S. cooperation on Jabhat al-Nusra as a serious problem for the future of his organization. Many analysts have already pointed out that this move likely accelerated the rebranding campaign. Others have declared the move a trap set by Al Qaeda. All of this is probably true.

But there is something very interesting going on here. In written correspondence with Murtaza Hussain of The Intercept, Abu Sulayman al-Muhair (an Australian citizen, director of foreign media relations for Jabhat Fath al-Sham, and a U.S.-designated global terrorist) outlined a strategic narrative that almost exactly mirrors that of Abdul Haq’s National Commanders’ Shura.

• Work towards a pragmatic option

• Focus on the military solution first

• Support post-regime government, in whatever form

• Create distance from the most extreme factions

• Unite the rebellion, protect the minorities

This, I offer, is no coincidence.

It is difficult to judge if Al-Julani’s move is purely cosmetic or represents a serious change in direction. “Change is established through deeds and actions, not words.” However, it now appears that some “well-established Al-Qaeda operatives” have begun to defect from JFS. Hassan Hassan posits that this move may signify the revival of a Black September –type front group that “absorbs defections and attracts jihadists.” The separation of JFS nationalist and jihadist forces may further increase its appeal to more moderate rebel groups. Further still, this change in narrative could allow an injection of vital foreign power support to their military campaign.

One thing is certain: a united opposition should frighten both Putin and Assad (especially Assad). Al-Julani and Jabhat Fath Al Sham are now best positioned to create this unity.

It is clear that JFS is just getting started. They do not intend to abide by international cease-fire agreements nor are they interested in a short-term peace in Syria. As a military entity, the group continues to gain popularity and momentum. Some see international action against the group as inevitable. But should it be? The world continues to underestimate the brutality and resolve of the Syrian regime. Moreover, Assad will not step down unless his foreign sponsors force him out. The conflict is at an impasse.

Unequivocally, the United States cannot support Jabhat Fath Al Sham. That does not mean, however, that it should automatically support the Syrian/Russian campaign against them. The prospects for such action in the near-term have grown exponentially with the Russian-US negotiated cease-fire.

It increasingly appears, however, that JFS is now a key alliance shaper among opposition groups, one with ties to even the most moderate of factions. As such, the United States must understand that supporting a campaign against JFS amounts to direct backing of the Assad regime. It also amounts to a ‘mission-accomplished’ for Putin’s intervention in Syria, who seeks to keep Assad in power while projecting itself as the power broker in the Middle East.

Since the cease-fire agreement, a defiant Assad has made clear he seeks to remain in power and take back “every inch” of the country. Even amidst the agreement, the regime continues its siege on Aleppo, withholding aid from the city. Prospects for a true political transition look very dim. Can the United States, in good conscious, back such an agenda?

There is an alternative.

While keeping the focus on defeating ISIS and protecting U.S. forces on the ground, the United States would be wise to quietly position itself for the next stage of the Syrian conflict.

Here’s what Washington can do:

1. Stay connected with its rebel partners, even if they align militarily with Jabhat Fath Al Sham. Keep the focus on military operations and pressuring the regime. Stop picking winners and losers. Work to dilute fundamentalist voices in the developing united opposition.

2. Expand intelligence operations against Jabhat Fath Al Sham. When the time comes, the negotiating position of the United States and its allies will depend on its ability to flex leverage on both sides of the conflict. See #6.

3. Control the narrative. If the focus on the ground in Syria shifts towards achieving military result, use it. Marginalize the influence of foreign jihadists while promoting the combat effectiveness of a united opposition.

5. Use international partners and become the de facto mediator between the regime, Russia, and the opposition on the ground. Be prepared to use increased pressure on the regime to force a political settlement.

6. Stand ready to deal with spoilers, especially if the spoilers turn out to be Jabhat Fath Al Sham.

This first part of this article is adapted from the essay “Snake Oil: U.S. Foreign Policy, Afghanistan, and the Cold War,” written to fulfill a Master’s requirement and later published in its entirety on E-IR.

Vince Tumminello is a former U.S. Marine and OEF advisor. He holds a Master’s in International Relations from the Strategic Studies Program of Johns Hopkins School of Advanced International Studies. The views presented here are his own and do not represent those of the United States Government.