The War over H. R. McMaster 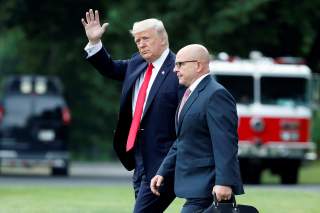 National Security Adviser H. R. McMaster is a man under fire. Or maybe that’s Steve Bannon. Or maybe, after a week that saw rivals Reince Priebus and Anthony Scaramucci suddenly head for the exits, both are in jeopardy. What is clear is that Donald Trump is increasingly pressed to make foreign policy decisions on several fronts, and senior aides under him—particularly McMaster and Bannon—are fighting over the personnel and philosophy that will go into the president’s decision-making. A seemingly-coordinated hard-right campaign is underway to force McMaster from office, at the same time that McMaster has conducted a lightning-speed purge of the National Security Council that has claimed several Bannon acolytes and old loyalists to previous National Security Advisor Michael Flynn. And notably, and perhaps confusingly, McMaster has garnered the public support of prominent neoconservatives.

“McMaster, On ‘Warpath,’ Purges Key Trump Allies From White House NSC,” reads The Washington Free Beacon. “McMaster Goes to War—Against His White House Enemies,” reads The Daily Beast. And the accusations against McMaster are getting nasty, floating him as just short of anti-Semitic. “‘Everything The President Wants To Do, McMaster Opposes,’ Former NSC Officials Say,” reads a headline Thursday in The Daily Caller. And Breitbart prominently covered a Facebook post by right-wing Jerusalem Post writer Caroline Glick in which she alleges the National Security Adviser is “deeply hostile to Israel and to Trump” and that he disagrees and actively undermines Trump's agenda on just about every salient issue on his agenda.”

“He fires all of Trump's loyalists and replaces them with Trump's opponents,” Glick continued. “MCMASTER’S NSC COUP AGAINST TRUMP PURGES CRITICS OF ISLAM AND OBAMA,” reads FrontPage Magazine, in an article retweeted by Laura Ingraham, a frequent Fox News personality with ties to the White House. Jordan Schachtel, who has been after McMaster for some time, writes that a senior administration official told him that McMaster purportedly constantly refers to Israel as an “occupying power.” Though the campaign has not been provably linked to Bannon, the ex-Breitbart chief, his feud with McMaster has been long reported. Mr. Schachtel is also formally of Breitbart.

More radical elements have come to loggerheads with McMaster. One of the dismissed NSC staffers, Rich Higgins, had circulated a memo before his sacking alleging  “deep state” forces of aligning with “Islamists” and “globalists” to destroy the president. And Mike Cernovich, a member of the “alt-right” or “alt-light” (depending on who you ask), has been continually agitating on Twitter for McMaster’s ouster.

But what does this all mean, and who stands to gain from McMaster’s departure—or Bannon’s? It’s unclear. McMaster is no foreign policy realist’s dream: he has feuded with Bannon over Afghanistan (Bannon, and reportedly the president, essentially want the U.S. military to leave, while McMaster wants more troops). On the other hand, if the United States does exit Afghanistan, Bannon and Trump son-in-law Jared Kushner have reportedly toyed with the idea of allowing mercenaries to have a significantly enhanced role in the country, as a staying force. The pair have held talks with Erik Prince, CEO of the company formerly known as BlackWater, of Iraq War infamy. Prince, the brother of Secretary of Education Betsy DeVos, has been making media appearances more frequently in recent days.

Elsewhere, McMaster has been a powerful force in persuading the president, so far, to keep the Iran deal. One of the rumored replacements for McMaster, CIA Director Mike Pompeo is a decided Iran hawk who has ramped up efforts against Tehran in his brief tenure at Langley. McMaster is more in line with the president, at least how the president feels currently. “Thus far … no one in the administration can move Trump to start a war because he doesn't want to have his Iraq,” a military analyst whose mentors in the U.S. national defense community told Al-Monitor. “With Iran, they are looking at regime change but coming up empty. There are no good plans, no decapitation strikes possible.” But Trump, ever the paradox, is also said to be itching to scrap the Iran nuclear deal.

“I feel a bit confused,” says Scott McConnell, founding editor of the American Conservative, which has criticized U.S. interventionism from the Right for over a decade. “The America First Trump people are all too close to the right wing pro-Israelis, for my liking. But the establishment [such as McMaster] is too hostile to Russia. The position of ‘detente with Russia, possible detente with Iran, Europe should get control of its borders’ seems unrepresented . . . a puzzlement because it is what is most sensible.” On the other hand, prominent neocons like Bill Kristol and Max Boot, and the establishment bulwark Heritage Foundation, all backed McMaster Friday.

If there is (yet another) White House civil war, and all indications are that it’s indeed occurring, the major question is likely this: what does Bannon think about Iran? Former National Security Adviser Flynn was no man of the establishment, and not friendly with the neocons, but in some ways—just read his book—he was profoundly more radical, seeking to commit the United States to scores of interventions. Is that what this is all about? That ex-Breitbart writer’s social media feed is potentially revealing: “How an Iranian front group infiltrated 41 US universities,” reads his pinned post.

Image: U.S. President Donald Trump walks to Marine One with National Security Advisor H.R. McMaster as they depart for a day trip to Miami from the White House in Washington, DC, June 16, 2017. REUTERS/Joshua Roberts.