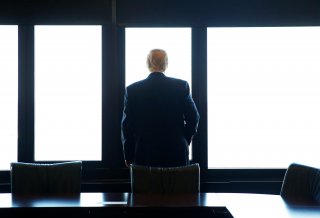 PRESIDENT DONALD Trump is often accused of destroying the postwar global order, but he may be saving it. Trump is pursuing a nationalist foreign policy that puts America first and downplays the prospects of reforming the world we live in. At the same time, he acts as a realist to preserve a status quo which is radically different from the world of the 1930s. It is largely democratic and open, not revanchist and xenophobic. As a businessman before and president now, Trump exploits this world to cut deals abroad. Rather than dismantling the global order, he is seeking to balance it better in two ways: to get U.S. allies to share more of the burdens of common defense and trade, and to get China to accept the basic rules of a market-oriented world economy. If neither happens, the liberal world order will probably deteriorate anyway—not because Trump has undermined it, but because the American people will never sustain it if allies continue to shirk burdens and China milk markets.

In short, Trump is providing a course correction for the postwar global order that may be the best hope for sustaining it. His approach may be shocking, especially because nations have not seen such openly nationalist policies since 1945. But it is also less damaging because the world is a much better place than in 1945. Trump’s policies may moderate the radical changes of the past seventy-five years, but they are unlikely to reverse them.

WHAT IS Trump’s strategy, and more importantly, what are the results? If one looks only at Trump’s tweets and tactics, there appears to be no strategy. But if one looks at the direction in which events are moving, the picture is quite different. NATO and Asian alliances are spending more, not less, on common defense. Alliance forces sit on the border of Russia for the first time since 1991, supply Ukraine with lethal weapons against Russian invaders, and challenge Chinese naval expansion in the Pacific. Outside of Europe and Asia, America moves back toward a more limited role: toward an offshore strategy that targets terrorism; backs the only real democracies in these regions (Israel and India); and insists that allies and local nations supply the majority of boots on the ground in foreign conflicts. In trade, Trump exploits America’s booming economy to renegotiate trade balances. In immigration, he buys time to let the country absorb an unprecedented influx of migrants.

Overall, Trump’s nationalist/realist policies may be just what the doctor prescribed to sustain the global world order. I say that as an internationalist who would prefer a more value-oriented and less crude approach. Previous presidents talked about sharing burdens and rebalancing trade, yet did little to achieve them. Their internationalist approach reassured allies, and those allies, feeling no pressure, continued to free ride on America’s leadership. Any real change required a root and branch approach. Trump ripped up the ironclad American commitment to global security and world trade—or at least convincingly threatened to do so—and allies and trading partners began paying attention. Now, in a way, the future of globalism depends more on what they do than on what the United States does. After seventy-five years under American tutelage, they will either accept equal global responsibilities in both security and trade, or nationalism will pull them and the United States “back to the future.”

TRUMP CAME into office declaring: “NATO in my opinion is obsolete because it’s not covering terrorism […] and also you have many countries that aren’t paying their fair share.” But once in office, he said NATO was no longer obsolete. He called for reforming, not dismantling, alliances.

Yes, Trump thunders against NATO in words. But he strengthens it in deeds. He increased U.S. NATO spending by 40 percent for troop deployments on Russia’s borders and sharply increased, not decreased, U.S. defense expenditures overall, from $586 billion in 2015 to $716 billion in 2019 (and a projected $750 billion in 2020). Moreover, Trump accelerated the trend toward higher contributions by other NATO members. NATO members agreed in 2014 to increase their defense budgets over the next decade from the then prevailing average of 1.42 to 2 percent of GDP. At the time, only three members met the 2 percent target; by 2019 nine members did, and fifteen are on track to reach that level by 2024.

The United States still accounts for 70 percent of all defense expenditures by NATO members, even though it accounts for only 50 percent of NATO’s GDP. European members like to say that is because America is a world power: U.S. military spending covers operations outside Europe—in Africa, the Middle East, Latin America, and Asia. True enough, but Europe, too, is now a world power. That is the point Trump is making. Additionally, Africa and the Middle East are much closer to Europe than the United States. Why does America have 5,000 troops in Iraq while Germany has only 120 and France 400? Shouldn’t allies be providing roughly 50 percent of troops and costs? As it stands, Europe accounts for the same percentage of the world economy as the United States, 22–24 percent. When you add Japan in, the allied percentage is higher. The truth is that America’s allies are, by themselves, global powers. Until they acknowledge that they too have corresponding global responsibilities, NATO may indeed fail.

But if it does, it will not be because of Trump. The German cabinet decided in March 2019 to keep defense spending as low as 1.25 percent of GDP for the next five years. As Walter Russell Mead concluded in a 2019 Wall Street Journal article, “Berlin is thumbing its nose not only at Donald Trump but at the U.S.” In the short term, Trump is giving America’s NATO allies the benefit of the doubt. He is encouraging them to do more while the United States is still providing much. In the longer run, he is sending the Europeans a clear message: either contribute more or recognize that America may not be there the next time you need it.

There is no evidence whatsoever that Trump’s NATO policy has benefitted Russia. Quite the contrary: while President Barack Obama bent over backwards to reset relations with Moscow—scuttling NATO missile defense systems in Eastern Europe and famously promising Putin he would be more flexible after the 2012 elections—Trump has managed both competitive and constructive relations with Russia despite preposterous charges that he is an agent of Moscow. He has been tough—much tougher than Obama. Trump endorsed the emplacement of NATO, including American, forces on the borders of Russia for the first time since the end of the Cold War (four battalions in Poland and the Baltic states). Obama initiated that step but only after Russia invaded Ukraine. A year before that invasion, he withdrew the last of America’s armored combat units from NATO. Trump subsequently authorized the sale of lethal weapons to the Ukraine government, something Obama repeatedly refused to do so.

Ironically, Trump was then impeached for weakening Ukraine (and aiding Russia) by temporarily suspending that aid to pressure Kiev to crack down on corruption—corruption that happened to involve a company whose board included Hunter Biden, son of Obama’s vice president, Joseph Biden. Yet despite this charge, U.S. troops under Trump confronted Russian mercenary forces in Syria, killing several hundred of them, while the United States under Obama invited Russia into Syria unchecked, purportedly to remove chemical weapons (which continued to be used). Furthermore, Trump threatened sanctions on European firms if they went ahead with the Nord Stream II gas pipeline under the Baltic Sea to supply Russian gas to European markets—a step which Obama never seriously considered. Isn’t it reasonable to argue that Obama, rather than Trump, was more lenient on Russia?

Even under the pressure of Moscow collusion charges, Trump has kept open the possibility of cooperating with Russia. The two countries share interests in managing ground and air conflicts in Syria and Iraq, updating or mutually abandoning Cold War arms control agreements in Europe (inf, start  and potentially New start), and negotiating logistical arrangements in central Asia for NATO forces in Afghanistan.

TRUMP IS also strengthening alliances in the Pacific. His first meeting with a foreign leader after his election was with Japanese prime minister Shinzo Abe. Over the next two years, the two leaders met personally ten times and spoke thirty other times. Trump also reinforced the alliance with South Korea, coaxed Seoul to complete the deployment of theater missile defenses, and then cultivated an unprecedented, not to say unorthodox, pas de deux with North Korea’s Kim Jong-un, respecting South Korea’s right to play a lead role in this duet and urging China not to let Pyongyang endanger wider global stability. True, there has been no progress on denuclearization. But North Korea has suspended nuclear and long-range missile tests for three years. Even if these activities resume in 2020, that counts for something.

The key target in Trump’s approach is China. Beijing aspires to great power status, which Trump is ready to concede, but does not want to play by great power rules, which Trump is unwilling to ignore. China’s power, unlike that of the former Soviet Union, depends heavily on ties with Western markets and technology. Trump leverages those ties to force China to make a choice: go your own way—in which case Western investors will find alternatives in other markets, such as Vietnam, India, and Indonesia—or accept balanced and binding commitments in the global trading system and continue to prosper as a friendly economic and political rival.