What Trump Gets Right on Nuclear Security 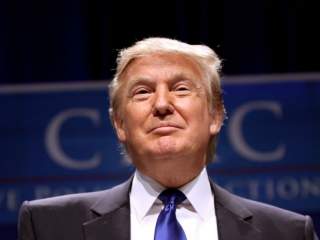 Donald Trump’s confession to the New York Times that he would not rule out using nuclear weapons, and to MSNBC that he saw advantages to their acquisition by U.S. allies, unleashed a barrage of criticism from across the political spectrum. Chris Matthews protested that “presidents don’t talk about use of nuclear weapons”; in USA Today, Mira Rapp-Hooper called his dismissal of how America’s nuclear umbrellas discourage proliferation to allies “cataclysmically dangerous”; Douglas J. Feith in National Review managed to lump Trump together with President Obama as the two individuals most subverting “American credibility” and encouraging nations to “‘go nuclear’ . . . perhaps irresistibly.” Japanese and South Korean officials felt obliged to reject Trump’s counsel publicly. Even Obama jumped on the pile, judging that Trump’s comments “tell us the person who made the statements doesn't know much about foreign policy, or nuclear policy, or the Korean Peninsula or the world generally.”

Needless to say, few members of the foreign-policy cognoscenti came to Trump’s defense. Even so, his remarks about why the United States opposes the spread of nuclear weapons were surprisingly insightful. Gene Gerzhoy and Nick Miller, in an otherwise scrupulous essay on what political science has to say about the matter, misconstrue what Trump meant when he suggested that Japan would renounce its three nonnuclear principles—not to possess, manufacture or introduce the weapons of mass destruction. “If the United States keeps on . . . its current path of weakness,” the candidate warned, “[Japan is] going to want to have [nuclear weapons] anyway with or without me discussing it.”

Trump was partly riffing on bipartisan attacks on Obama for questioning the wisdom of applying force on behalf of abstract goals such as maintaining “credibility,” a critique that gained popularity after he eschewed military action when Bashar al-Assad ignored his red line against chemical weapons in the Syrian civil war.

But Trump also added an economic forecast. With the nation’s debt exceeding $19 trillion and, indeed, the country’s annual gross domestic product, its ability to foot the bill for the globe-spanning network of military alliances it formed during the Cold War is narrowing. If the first rule of foreign policy is that you eventually get the foreign policy you can afford, then Washington will find it increasingly difficult to rein in the nuclear activities of allies and adversaries alike. After all, the recent coup in reimposing international inspections on Iran’s nuclear facilities was in large measure achieved thanks to a U.S.-led regime of economic sanctions and financial barricades, both of which were made possible by the dollar’s central position in the international monetary system.

Plus, the U.S. nuclear umbrella under which its allies shelter is not cheap: the James Martin Center for Nonproliferation Studies estimates that the looming round of modernization to the ballistic-missile submarines, long-range bombers and intercontinental ballistic missiles that comprise the U.S. nuclear triad will cost $1 trillion over thirty years. Even with sequestration and the U.S. military’s declining footprint in the Middle East, the Obama administration forecasts spending a little more than $500 billion on defense each year through 2020; extrapolating forward, that level of defense spending means that nuclear weapons will consume approximately one in every fifteen dollars spent on the U.S. military through 2045.

Nuclear nonproliferation has enjoyed enough bipartisan support to make Trump’s words sound revolutionary, and they are certainly bad politics. Ahead of the 1964 presidential election, Barry Goldwater—like Trump, a divisive, antiestablishment Republican—stated that it might make sense if U.S. allies received nuclear weapons. Lyndon Johnson’s campaign had a field day, casting his opponent as a dangerous crank and running the infamous “Daisy” ad, in which a young girl picked petals as an ominous voice counted down to Armageddon: “Vote for President Johnson on November 3,” the voice-over warned. “The stakes are too high for you to stay home.”

Johnson’s advisers recognized that while they might count on the American people and their Cold War allies to support military action in Southeast Asia and elsewhere, wantonly brandishing atomic forces, let alone offering them to former enemies like West Germany or Japan, was a bridge too far. After Goldwater, no presidential candidate besides Reagan, a nuclear abolitionist, questioned the contradiction between disarmament and deterrence in U.S. nuclear policy.

Trump’s provocations illuminate the real source of the bipartisan consensus behind nonproliferation: the fear that the spread of nuclear weapons imperils American internationalism, which is based on the ability to project military power. While progressives cling to the notion that nonproliferation remains an important way station en route to abolition, and neoconservatives to multilateral efforts as useful (albeit unreliable) tools for depriving adversaries of weapons of mass destruction, the liberal internationalists and realists who make up the backbone of the country’s foreign-policy elite know better.

Nuclear weapons are the great equalizer. Bill Foster, the first director of the United States Arms Control and Disarmament Agency, recognized when he wrote in support of a nuclear nonproliferation treaty in Foreign Affairs against the backdrop of Johnson’s preparations to Americanize the Vietnam War and China’s first nuclear test, that “[i]n the short run we might successfully avoid involvement in, say, an Asian conflict in which nuclear weapons had a role. But . . . it is highly likely that, in a world of many nuclear powers, considerable pressure would develop—and perhaps it would prove sufficient—to force the United States in just such an isolationist direction.”

His point was unmistakable. Officials such as Foster certainly believed that any increase in how many states had nuclear weapons would make the world a more dangerous place. This apprehension has surely informed America’s nonproliferation efforts. But they also felt that nuclear weapons were a dagger pointed at the heart of America’s military supremacy and, indeed, its citizenry’s appetite for the costs and risks that went along with international engagement. The global nonproliferation regime’s achievements are undeniable, but they would not exist without America’s vested interest.

Jonathan Hunt is a lecturer in modern global history at the University of Southampton. He is writing a history of nuclear nonproliferation during the early Cold War.