What Trump Should Keep in Mind When Meeting Putin 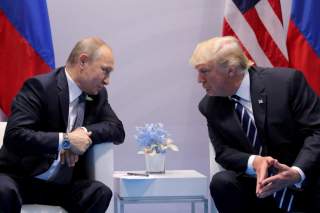 In roughly a week, President Donald Trump will conduct his first official one-on-one meeting with President Vladimir Putin of Russia. Many experts have already offered their advice to the American president, suggesting that he should stay firm and by no means recognize that Putin is America’s “friend, ally, or even possible partner.”

I’m not so sure about this. Putin, I would argue, is a statesman who believes he is one of the world’s most powerful men, and just wants to be addressed accordingly, debate global issues and be heard—not by a collective body or international assembly, but by someone he counts as an equal. Trump fits this role well, and I therefore expect that not only a dialogue, but a kind of a friendship, might develop between the Russian and American presidents, as we saw in the early 2000s between Putin and former U.S. President George W. Bush.

But what I want to mention is a point that is rarely taken into account in Washington. For the majority of DC policymakers, in the recent quarter century there existed two Russias: the one of the 1990s, which was democratic, market-oriented and Western-friendly, and the other of the 2000s and 2010s, which became authoritarian and imperialistic (I have previously commented on this in Internationale Politik). Likewise, it is believed that there are two groups of Russian “oligarchs”—those who arose in the “free market times” and those who were handpicked and nurtured by Putin. This is, from my point of view, a deeply misleading thesis that mutilates any realistic approach to contemporary Russia.

To clarify, there those who are members of Putin’s inner circle—like the Rotenbergs brothers, the Kovalchuk brothers, Igor Sechin, Alexei Miller, Alisher Usmanov, Viktor Vekselberg, etc.—and those who became well established before Putin, and were rather linked to former President Boris Yeltsin—individuals like Roman Abramovich, Petr Aven, Mikhail Fridman and Anatoly Chubais. Some even believe that it’s possible to set these men onto each other, thereby initiating a “deadly struggle” inside the Russian elite. But even Putin nicknames the 1990s as the “spunky times.” He emerged as a politician during that time period, and it appears the most “liberal” oligarchs were directly responsible for much of his career advancement—and later benefited greatly from them. To highlight just one case, I would point to Mr. Aven, one of the major stakeholders in the Russian conglomerate Alfa Group, who recently addressed a DC think tank arguing that his entity should not be sanctioned. Mr. Aven was the one who cleared Putin’s early commercial deals when the latter was vice-governor of St.Petersburg, allowing him to export oil, timber, aluminium and other commodities in exchange for food that never emerged in the city (Mr. Aven served as the Minister for the External Economic Relations at the time). During Putin’s whole reign, Alfa Bank has run the accounts of many state-owned corporations, and has heavily funded the Russian military industry and the export of country’s nuclear technology.

For years, Alfa’s key business unit in Russia was run by the son-in-law of the current Russia’s foreign minister, Sergei Lavrov. And til now the group employs Mrs. Masha Faassen, Putin’s eldest daughter. I am not accusing Alfa Group of any wrongdoing—it was merely playing a smart game, being close to Russia’s leader and presenting itself as an archetype of a civilized business; other Russian businesses are all alike and would be happy to follow in Alfa’s footsteps.

To summarize, I would argue that when meeting with the Russian leader, Trump and his aides should not please themselves with a tale of there being “two Russias.” It is rather true that there is one Russia, Putin’s one, where business activities and the public service have been merged for a long time. If one hoped there were Yeltsin-era people who stood aside of the current regime, I would remind that, just several days ago, the Kremlin revealed that Yeltsin’s former chief of staff and son-in-law, Valentin Yumashev, has been Putin’s official advisor for the last eighteen (!) years. Therefore, I would reiterate that U.S. leaders should not bet on some inner disjunctions inside the Russian elite, and should talk to Putin as a leader who has totally consolidated his grip on power and who will remain in charge of Russia even when all the current residents of the White House are long gone.

Vladislav Inozemtsev is the director of the Center for Post-Industrial Studies in Moscow, and is a visiting senior research fellow at the Polish Institute of Advanced Studies.