What Trump's Budget Reveals about His Military Strategy 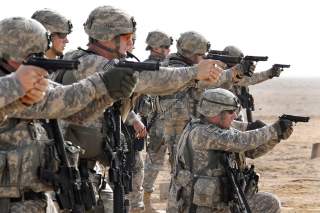 Donald Trump’s crusade against the inside-the-Beltway elite proceeds apace. Or, at least, that is what he wants you to believe. The latest foray is his “skinny budget,” an unabashed assault on a bevy of pet projects and sacred cows, combined with an equally brazen bid to grow the Pentagon’s budget.

As the saying goes: the White House proposes and the Congress disposes. This budget will not become law. It is hardly a worthless exercise, however, it provides yet another window into the president’s thinking, especially with respect to how he intends to conduct foreign policy. On balance, the priorities revealed by the budget suggest that President Trump wishes to use the military more often and engage in diplomacy less often than his predecessors. The mystery is why he thinks that that approach will be more effective.

The president and his budget director, Mick Mulvaney, get points for symmetry. The budget proposes $54 billion more for defense than under current law, and $54 billion less for nondefense discretionary spending. The apparent offsets maintain the fiction of fiscal responsibility. But the budget doesn’t touch mandatory spending or tax revenues and looks mostly at 2018. “By focusing only on discretionary spending, this budget effectively ignores 70 percent of spending and 90 percent of its growth over the next decade,” notes the Committee for a Responsible Federal Budget. The Trump administration is also taking full advantage of Overseas Contingency Operations funds, which are excluded from fiscal caps: the administration wants $70 billion for the remainder of 2017 (a $5 billion increase), plus another $65 billion for 2018.

The budget supposedly “Initiates an ambitious reform agenda to build a military that is as effective and efficient as possible, and underscores the President’s commitment to reduce the costs of military programs wherever feasible.” The administration has offered no evidence in support of this claim. The more detailed 2017 security supplemental, for example, requests no additional money for the DoD’s base closure account and, to my knowledge, President Trump has yet to weigh in on a range of defense reform initiatives that enjoy broad, bipartisan support.

The far more serious problem, however, is that the military spending outlined in the budget is not tied to any discernible strategy. It seems mostly like an exercise in more for more’s sake. Todd Harrison, director of defense budget analysis for the Center for Strategic and International Studies, has noted that “unlike the Reagan buildup, which was guided by a clear strategic rationale, the rush to increase defense spending today could undermine its intent. Spending a billion here and a billion there on weapons and forces that are ‘shovel-ready’ is neither strategic nor effective in the long run.”

President Trump’s call for cutting the State Department and USAID budgets by 28 percent is equally short-sighted. Republicans routinely invoke Ronald Reagan’s “peace through strength” mantra, and Trump is no different. But Reagan never adopted an “all-force, no diplomacy” approach to foreign policy. Indeed, his Secretary of State George Shultz was an accomplished diplomat and negotiator.

In general, President Trump’s rhetoric is disconnected from his spending priorities. For example, the president once again invoked the slogan of “America First.” “It is time to prioritize the security and well-being of Americans, and to ask the rest of the world to step up and pay its fair share,” Trump said.

But spending more money on the U.S. military is unlikely to induce greater burden sharing on the part of U.S. allies. After all, from Iraq and Afghanistan, to North Korea and the South China Sea, the U.S. military has been quite busy in recent years. Add in the four or five other countries regularly subjected to U.S. drone strikes and you begin to get a clearer picture of the scope of U.S. military activism. But Trump’s call for “a larger, more capable, and more lethal joint force,” suggests that he thinks our soldiers, sailors, airmen and U.S. Marines haven’t been doing nearly enough.

These ideas likely originate from Trump’s visceral disdain for his predecessor. If Obama said up, Trump thinks down. Believing that Obama was committed to peace at all costs, Trump is determined to do the opposite. But the notion that President Obama was reflexively opposed to U.S. military involvement abroad is a myth, as my Cato colleagues Trevor Thrall and John Glaser note.

Thus, Trump’s call for a more energetic use of force in more places doesn’t signal a dramatic departure from the past, but rather more of the same. Similarly, this budget mostly confirms what some have suspected all along—despite all of the speculation about draining the swamp and dramatically reorienting U.S. policy, Trump is a committed interventionist.