What Trump's Syria Withdrawal Means for the Middle East 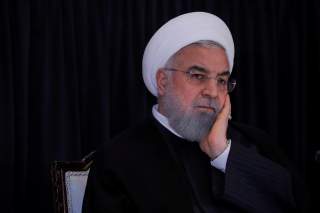 In Washington, President Donald Trump’s decision to pull out U.S. forces from Syria continues to baffle. It is broadly considered to give the upper hand to three main actors involved in that country’s nearly eight-year long war: Russia, Iran and its allies, and Turkey. In the case of Iran, plenty of pundits in Washington seem sure that a U.S. withdrawal from Syria will only whet Tehran’s appetite for more foreign adventurism as it seeks to advance its regional agenda. That might bear out in the long term, but in the short term, the Iranians are evidently fairly anxious about developments and their fate in Syria.

The initial reaction from Tehran to Trump’s decision to withdraw 2,000 U.S. troops from eastern Syria has been one of matter-of-fact but also of suspicion. On the one hand, many Iranian commentators simply painted the decision as a political move by an unpopular American president who likes to give himself a fighting chance to win a second term as president in 2020.

This school of thought in Tehran views Trump as someone who knows an open-ended American military commitment to Syria has many pitfalls. Not least, it has the potential to substantially reduce Trump’s chances for re-election had Washington been forced to expand its military operations in Syria. Among this group, there is also recognition that Trump’s decision has broad support in the United States, including many on the left. Many Americans do not support Trump’s overall foreign policy but believe the U.S. military has no persuasive strategic reason to stay in eastern Syria. In other words, Trump’s Syria decision was no fluke and is unlikely to be overturned. This reading in Tehran tallies well with many appraisals available in the United States on Trump’s Syria decision.

Other Iranian views, which likely are shared by many at the top ranks of the Islamist regime in Tehran, look at Trump’s decision not as a sudden or politically-driven calculation—and therefore based on poor strategic judgment. It is instead seen to be part of a judicious American plan to prolong the Syrian war.

These observers believe that Trump is pulling out of Syria as part of a plan to break the Iran-Turkey-Russia partnership by pulling Turkey out with the U.S. promise of giving Ankara a free hand to crack hard down on the Syrian Kurds, Ankara’s principal nemesis in Syria. In this view, the decision to pull out of Syria was not just a case of willy-nilly political theatrics by Trump. It is presented as a U.S. design to prolong the Syrian war and deprive Iran, Russia and the regime of Bashar al-Assad a chance to solve the conflict politically now that the opposition has largely accepted defeat on the battlefields. Still, this reading is tainted by its anti-U.S. biases and is borderline conspiratorial as is evident by the Secretary of Defense James Mattis’ resignation in protest against Trump’s decision to pull out of Syria.

A more accurate Iranian assessment would instead have pointed out two undeniable realities. First, that Washington has not had a Syria strategy of any substance since the outbreak of the war in 2011, which Tehran has no doubt benefitted handsomely from. This negates the argument that prolonging of the war is the basis for Trump to pull out the U.S. troops. This would have required the kind of policy imagination that has not been evident in American actions in Syria.

Second, the Iranians are right in seeing lack of U.S. action in Syria in paving the way for a new approach by the Arab World toward Damascus. This rightly concerns Tehran given its rivalries with Arab powers such as Saudi Arabia and the United Arab Emirates (UAE) for regional influence. There is the recent visit of the president of Sudan to Syria—no doubt facilitated by other major Arab powers—to be hosted by Assad, to talk of the Arab League in 2019 readmitting Syria, to the UAE reopening its embassy in Damascus seven years after Abu Dhabi closed it down in sympathy with the Syrian opposition.

Still, these developments have been in the making for many months. Take the decision by the UAE to reopen its embassy in Damascus. This has been in the cards since the Obama administration demonstrated through its actions that it was not willing to have U.S. troops bogged down in Syria against Iran and Russia. Once anti-Assad Arab states realized the United States could not be counted on, and that a Russian-Iranian military effort to save the regime of Assad was likely to prevail, they began to look for a Plan B.

Today that Plan B is perhaps best encapsulated in the hope that the likes of the UAE and Saudi Arabia have to play a substantive role in the post-war reconstruction efforts as a way to stay in the Syrian game. As the UAE’s minister for foreign affairs Anwar Gargash put it, “the Arab role in Syria is becoming more necessary against the regional Iranian and Turkish [ambitions]” and that “UAE today, through its presence in Damascus, seeks to activate this role.”

This takes us to why Tehran might be nervous about the coming postwar era in Syria. On the one hand, Iran sees both Russia and Turkey as fair-weather partners in Syria because, as Iran’s foreign minister Javad Zarif has repeatedly said, they don’t always look eye to eye about the future of Syria. However, this contentious partnership with the Russians and the Turks is as old as when the three countries first pulled their efforts together to establish the so-called “Astana Process” to find a political resolution to the Syrian war.

On the other hand, the one immediate impact of Trump’s categorical pullout from Syria is the likely acceleration of Arab efforts to readmit Assad back to the fold. What such Arab efforts likely will include in terms of incentives is the much-needed financial aid for the costly reconstruction of Syria.

Tehran has a choice to make. It can decide to see such Gulf Arab incentives aimed at Assad as a threat to its influence in Syria. Alternatively, it can welcome such reconstruction aid and refuse the temptation to continue to see Syria as a zero-sum-game effort for regional influence.

The Iranians do not have the financial capacity to do much in terms of reconstruction in Syria anytime soon. The Russians, and the Turks too, have also very limited capacity to inject reconstruction funds into Syria. And meanwhile, Tehran is publicly committed to finding ways to lessen tensions with its cash-rich Gulf Arab rivals. Iranian-Gulf Arab détente was certainly not President Trump’s intention when he pulled U.S. troops out of Syria. But seeing the U.S. military withdrawal creating a power vacuum—and therefore more competition for territorial control and bloodshed—is only one side of the coin. Russia and Turkey aside, at least Iran and its Gulf Arab rivals can look at this moment as an opportunity not to repeat the mistakes of the last eight years of war in Syria.

Alex Vatanka is a Senior Fellow at the Middle East Institute in Washington D.C. Follow him @AlexVatanka.