What Venezuela's Interim President Must Do 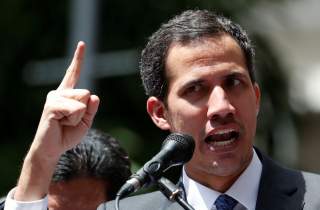 On January 23, Juan Guaidó, the leader of Venezuela’s National Assembly, assumed the presidency. Then all bedlam broke loose.

Venezuelans around the world took to the streets to protest against dictator Nicolas Maduro’s socialist regime and celebrate the potential change in leadership. Yet even as nearly all western countries formally recognize Guaidó as Venezuela’s legitimate president, defeating Maduro’s grip on power will take more than words and recognition from abroad.

Venezuela has suffered for twenty years under socialist policies that have caused shortages, hyperinflation, and crime, forcing millions to flee the country. The Maduro regime also sponsored terrorist groups such as Hezbollah and the National Liberation Army (ELN in Spanish), while it profits from trafficking cocaine to other countries. Yet past attempts to remove Maduro and Chavez (the dictator before him) have only resulted in the death of hundreds of peaceful protestors due to the regime’s control over the military.

This time is different. Venezuelans now have an internationally recognized leader and a path to end oppression. But this path will require action from Guaidó to either break the regime’s grip over the military or force it into a military confrontation within the region.

Juan Guaidó declared himself president because the legitimate Venezuelan Supreme Court declared Maduro’s new presidential term as illegitimate since he was only victorious because of—yet another—sham election. According to Article 233 of Venezuela’s constitution, the president of the National Assembly is next in line for the presidency if the president is removed from his position within the first two years of his term by the Supreme Court. It’s also required that the new president calls for elections within thirty days.

Rightfully, the United States, Canada, and most Latin American countries, including Venezuela’s neighbors Brazil and Colombia, have recognized Guaidó as Venezuela’s only legitimate leader.

Maduro pushed back by trying to break diplomatic ties with the United States and demanding that all personnel in the American embassy leave the country within seventy-two hours. However, Guaidó quickly issued a statement asking everyone to disavow this notice since he is now Venezuela’s president. Secretary of State Mike Pompeo ignored the dictator’s demand to remove U.S. personnel, stating that Maduro has no legitimate power to break diplomatic ties.

With this conflict underway, the next few days are crucial to Venezuela’s struggle for freedom. Guaidó must continue obtaining international recognition and take actions that will put Maduro in check.

The first of these actions is already on the table and has an expiration date. If Maduro’s military breaks into the American embassy it would be an act of war. Maduro faces a choice: undermine his legitimacy by backing down or enter into a military conflict with the United States.

The next step for Guaidó to free Venezuela should be requesting that all countries deliver already-prepared humanitarian aid, such as medicines and food supplies, to Venezuela. If he makes this request, Maduro will be forced to either let in the help or risk military confrontation. To resist the arrival of much-needed and legitimately-authorized supplies would only further undermine Maduro in the region.

Furthermore, Guaidó should name new ambassadors and executives of Citgo, Venezuela’s government-owned oil company in the United States. Then, the Trump administration should take control over Citgo and all Venezuelan embassies, evicting all those named by Maduro, to turn them over to the government led by Guaidó. Other Latin American governments are likely to follow America’s lead.

Guaidó should also call on the Venezuelan people to keep protesting on the streets while warning the Maduro regime that he is ready to invoke the responsibility to protect principle if the previous two measures fail to depose Maduro, or if he were to order violence against the protestors. This international principle would give Guaidó the prerogative to request military support from countries in the region and around the world to protect the Venezuelan people. The threat of the responsibility to protect alone could be enough to force high-ranking Venezuelan military officers to defect from Maduro.

Tens of thousands Venezuelans are dying due to starvation, lack of medicine, and crime every year, and up to seven million more are expected to flee the country in 2019 alone, leaving a total of about ten million in exile. There is no more time to waste. Maduro and his murderous, corrupt affiliates should not be treated as state actors anymore, but as the narcoterrorist occupation force they are. The international community is waiting, so with their help, Guaidó must force Maduro out and free Venezuela once and for all.

Daniel Di Martino (@DanielDiMartino) is a Venezuelan writer living in the United States and a Young Voices contributor.