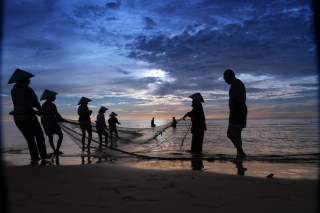 U.S.-Vietnam relations operate within a relatively restricted field of possibility that is primarily shaped not just by the United States and Vietnam but also by China, albeit indirectly. As Vietnam is the secondary state between the two great powers, a vital question for Hanoi is how to manage its political and diplomatic distance (or proximity) to Beijing and Washington. From 1990 until the second half of 2003, Vietnam remained near the Chinese orbit; even a position close to the equidistant line between America and China was politically impossible. The U.S. invasion of Iraq in 2003 radically changed Hanoi’s appraisal of the global balance of power. The national-security strategy adopted in July 2003 allowed Vietnam to reach the equidistant line, but moving toward that line was in no way frictionless and Vietnam continued to oscillate within the Chinese side of the line. The HYSY-981 oil rig crisis of 2014 helped Hanoi to break free of these self-imposed restrictions. Within just a few years, Vietnam moved to the vicinity of the equidistant line, at times even crossed the line to be relatively closer to the United States. This is the enabling, but also constraining, context within which Prime Minister Phuc will visit the United States next week.

The plateau on which the U.S.-Vietnam engagement operates is made of convergent interests and mutual trust. It is elevated largely by a combination of China’s aggressive power and America’s competent and kind power. The two major turning points in U.S. policy toward Vietnam (2001 and 2011) resulted from the view that China’s revisionist power needed to be balanced and that Vietnam could play a key role in that effort. China’s perceived aggressiveness was also the cause of the second turning point in Vietnam’s U.S. policy (2014). But the first turning point in Vietnam’s U.S. policy (2003) was the combined effect of U.S. brilliant power as demonstrated in the Iraq invasion and America’s benign power embodied in Washington’s initiatives of dialogue and cooperation with Hanoi.

How to Make America Great with Vietnam

While managing the political and diplomatic distance to Washington and Beijing is vital to Vietnam’s well-being between the giants, managing Hanoi’s perception of the international balance of power is a key to America’s success in Asia. The latter involves three major aspects: boosting both countries’ economic and military capabilities, demonstrating America’s competence in the hegemonic contest with China, and maintaining a friendly attitude toward Vietnam.

These imperatives can be materialized by a wide range of policies that are not confined to bilateral U.S.-Vietnam relations. With regard to U.S. policy toward Vietnam, three arrangements hold the key to the pursuit of these imperatives: a forward-looking trade and investment pact; a pro-law—not pro-status quo—approach to the South China Sea; and a comprehensive strategic partnership with Vietnam.

A Forward-Looking Trade and Investment Pact

The United States and Vietnam need a robust trade and investment pact that boosts the economic, and indirectly the military, power of both countries in a way that is sustainable in the long run and geopolitically beneficial. The existing bilateral trade and investment agreements fall short of these objectives. In the last decade, both countries were engaged in the negotiation of a new, multilateral trade pact called the Trans-Pacific Partnership that was supposed to serve this triple goal. The TPP would not only open wide market access, but it would also create a counterbalance to China’s economic pull effect and, in the case of Vietnam, force the country to reform its state sector and improve its public spending. However, the 2016 presidential election suggested that the TPP as a whole was domestically undesirable in the United States.

If a multilateral agreement is difficult to attain, the United States and Vietnam should negotiate a new trade and investment agreement with the triple goal mentioned above in mind. The new arrangement should be aimed at reforming both the current state of U.S.-Vietnam trade and Vietnam’s domestic economic environment. The current situation features a double deficit in favor of China. In 2016, for example, the United States suffered a trade deficit of $32 billion with Vietnam and Vietnam suffered a trade deficit of $28 billion with China. Technology imports from China outweighed those from the United States, resulting in a structural constraint that kept Vietnam on the lower rungs of the technology ladder. The new trade-and-investment pact should be aimed at reducing U.S. trade deficit with Vietnam by increasing U.S. exports of equipment and high-tech goods and reducing Vietnam’s trade deficit with China. To this end, trade negotiations should avoid the usual manner of the give-and-take based on present and special interests. Such myopic tendency can relief immediate pains but is counterproductive in the long run. Instead, the aim of the negotiation should be to improve the domestic environment in Vietnam looking forward so it will create an expanding market for high-quality goods from the United States and shrink the market for low-quality goods from China.

Not all places are created equal on the geopolitical chessboard. The economic geography of Asia dictates that whoever controls the sea lines of communication that run through the East and South China Seas will dominate Asia. China’s recent building of artificial islands in the Paracel and Spratly Islands has made the South China Sea a bottleneck on Asia’s lifeline, which carries 80–90 percent of the oil imports to China and Japan. If China can turn the South China Sea into a Chinese lake, then America’s role and influence in Asia will be severely undermined.

For years the United States’ approach to the South China Sea has been aimed at maintaining the status quo, while China’s is to creepingly shift it in Beijing’s favor. By acting in the gray zone between peace and open conflict and moving like slicing the salami, Beijing has been successful in changing both the geography and the power propensity of the region without triggering an armed resistance from its opponents. By clinging to the status quo, Washington inadvertently ties itself to the evolving status quo that reflects Chinese advantage and disables itself to roll back to the status quo ante, which is its real goal.

The latter two of these assumptions are wrong, however. It is the status quo ante, not the status quo, that is favorable to U.S. interests. The current status quo in the South China Sea—with China’s large artificial islands, long airstrips, deep-water harbors, surface-to-air and anti-ship missiles, and high-frequency radars—is far less favorable to the status quo ante that existed before the building of the artificial islands. But the pro-status quo approach commits the United States to the current status quo and dismisses a rollback to the status quo ante as unreasonable. This allows China to shape the evolving status quo to the expense of the United States and other stakeholders, brewing conflict below the surface. While the pro-status quo approach may be able to temporarily stop conflict from escalating on the surface, it is unable to stop conflict from brewing below it. When this brewing reaches a tipping point, war may be too late to prevent.

In the place of the failing pro-status quo approach, the United States should adopt a pro-law approach. The law here refers to the set of laws and legal precedents that are consistent with the United Nations Convention on the Law of the Sea and other universally recognized principles of international law. The pro-law approach is better than the pro-status quo one on three counts. First, it has the moral high ground of the law while the pro-status quo approach is morally justifiable just because it is defensive. The status quo may be just or unjust, but the law is the law. Second, the pro-law approach endeavors to roll back Chinese expansion to a state of affairs that is consistent with the 2016 ruling of the Permanent Court of Arbitration. This ruling has invalidated the nine-dash line and reduced the disputed waters in the South China Sea from about 80 percent to about 20 percent of the region. This state of affairs is favorable to anyone that has a stake in the freedom of the seas in the South China Sea. Third, the pro-law approach may cause tension to rise temporarily, but there are ways to avoid war when pursuing it. Elsewhere I have outlined a strategy that can contain both Chinese expansion and a U.S.-China war at the same time. At the core of this strategy lies a “whole of capability” approach that combines gray-zone activities with economic sanctions and other indirect measures.