What Was the Point of Regime Change in Iraq? 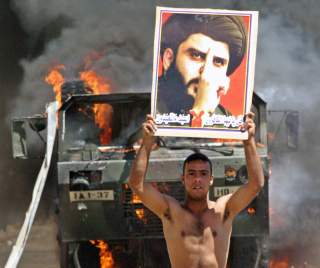 I was 23 years old and only knew so much. Unfortunately, it wasn’t enough.

On the evening of 25 January 2007, my platoon left the gates of Forward Operating Base (FOB) Rustamiyah and snaked through the streets of East Baghdad, Iraq. Our mission was to link up with and check on some local Iraqi policemen. It was a dangerous time. Upwards of 100 U.S. soldiers were being killed each month—many, if not most, in the capital city.

We’d been in the same area the night before. A drone spotted some men carrying a long, cumbersome object in and out of a local mosque and we were tasked to respond. That’s how it went back then. We stopped the men, sat them on the curb, searched their persons and made them wait while we called in Iraqi troops to search the mosque. It was clean (no weapons), as it turned out. It also turned out that the large transported object was a coffin containing the body of a young man. We had searched, delayed, and humiliated his brothers and distraught father.

The next night, I’d meant to bypass the mosque and take a more circuitous path. My new senior scout, who commanded the lead Humvee, and I had discussed my preferred route over a map before the mission. But when he later missed his turn and pulled onto the same, broad, mosque-laden avenue, I had neither the courage nor the confidence to correct the sergeant.

The rest is horrific history. A deadly improvised explosive device (IED) tore through the lead vehicle. I remember the screams, and the smell—a mix of panic and burnt flesh. When we opened the driver's door, Specialist Michael Balsley fell out. His skull had been pierced, and he had died instantly. In the chaos and smoke, it dawned on me that my favorite soldier and self-styled protégé had been sitting in the back. I knew I shouldn't look but did anyway. I wish I hadn't. What remained of Sergeant Alexander Fuller was strewn within the vehicle. It took me a decade to process the incident and compose myself enough to communicate with his then-pregnant wife.

We all knew who was behind that 2007 attack, of course: The Mahdi Army, the anti-American militia of the populist cleric Moqtada al-Sadr.

The whole mosque-raid and IED-strike episode reflected in microcosm the law of unintended consequences. In fact, the latest polling results from Iraq tells the same, broader story. Sadr, the despicable strongman of the slums, looks to have won the first general election in Iraq since the defeat of ISIS.

Sadr’s militias twice rose up against U.S. forces in Iraq and were responsible for hundreds, if not a couple thousand, American combat deaths. Sadr came from an impeccable pedigree of Shia scholars and leaders— Saddam had killed his father, brothers, and uncle—but Sadr, though always popular among the dispossessed, was then seen as little more than a joke. Many urbane Shia referred to him as "Mullah Atari," a reference both to his lack of scholarly theological credentials and childhood penchant for video games. American troops mostly called him "Mookie" and hated his guts.

Sadr has since re-branded himself as an enemy of corruption and a cross-sectarian proponent of governance reform. Nonetheless, to my men and most U.S. troopers, he’ll always be the fiercely anti-American thug who sent his impoverished, hopeless fighters out into the streets to kill soldiers and marines.

Back in the day, none of us even considered that "Mookie" could win an election, yet here we are, through the looking glass, again. This is the unintended output of regime change, of toppling a tyrant and attempting to socially engineer a foreign society. Once the war begins, and society is destabilized, the chips fall where they may.

The U.S. Army can bring down a dictator, but no amount of power and might can realistically control and construct the proceeding governments. The result: Moqtada al-Sadr astride the Iraqi nation-state. The government that the U.S. military installed so long ago grew so weak, so corrupt, and so illegitimate that its people chose a daft warlord to right the ship.

Let us remember this lesson and preemptively oppose the next regime change operation (potentially in Iran?). After spending $2.2 trillion in Iraq, and losing thousands of Americans and hundreds of thousands of Iraqi lives, we are not safer than we were before. Furthermore, the hard-earned taxpayer dollars could have instead been reinvested in here at home, benefiting the American people.

The only bright side in this dark tale is that it seems Sadr at least aspires to be an independent nationalist. He is as unpopular in Tehran as he is in Washington. In fact, in a brazen rhetorical intervention, a top adviser to Iran’s Supreme Leader announced, “We will not allow [Sadr’s bloc] to govern in Iraq.” That remains to be seen.

What we do know is that America's ill-advised and unnecessary invasion handed a big win to Tehran, and, for the last 15 years, Iraq was ruled by generally Iran-friendly Shia chauvinists. It may now be indirectly governed by a populist ideologue—Sadr—who openly championed the death and maiming of America's cherished soldiers.

Still, two things are certain. First, the U.S. has gained nothing of strategic value from its decades-long experiment in imposed regime change. And second, more tragically, I'll never be able to explain this latest turn of events to Fuller's widow—or to tell her what this was all for.

Danny Sjursen is a fellow at Defense Priorities. He served combat tours with U.S. Army reconnaissance units in Iraq and Afghanistan and later taught history at his alma mater, West Point. He is the author of a memoir and critical analysis of the Iraq War, Ghostriders of Baghdad: Soldiers, Civilians, and the Myth of the Surge. Follow him on Twitter at @SkepticalVet. The views and opinions expressed are the author's alone in an unofficial capacity and do not represent the official position or policy of the U.S. Department of the Army, the U.S. Department of Defense, or U.S. Government.