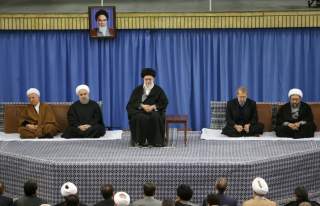 In Iran today, where the loyalty of aspirants to political office is closely monitored and overt dissent is severely punished, there is no credible measurement of the population’s true level of attachment to, or desire to be rid of, the constitutional caliphate fashioned in 1979 by Ayatollah Khomeini. Khomeini’s fusing of politics and religion via a new constitution codifying a “guardianship of the Islamic jurist” (velayat-e faqih) drew upon the religious devotion of Iran’s Muslims as the basis for his exercise of temporal power. For many Iranians at the time, Muslims included, religious dictatorship was a far cry from the participatory democracy they had anticipated after enduring the excesses of the shah.

Confronted with growing resistance in the spring of 1981 to the restrictive new order that culminated in massive pro-democracy demonstrations across the country invoked by MEK leader Massoud Rajavi on June 20—twenty-eight years to the day before Neda famously met her death under similar circumstances—Khomeini’s reign was secured at gunpoint with brute force, driving Iran’s first and only freely elected president, Abolhassan Bani-Sadr, underground and into permanent exile. This fateful episode was described by historian Ervand Abrahamian as a “reign of terror”; Professor Marvin Zonis called it “a campaign of mass slaughter.”

President Obama, reflecting a view common among analysts and journalists in America, has made imprecise reference to “the theocrats who overthrew the Shah.” The reality is that in the late 1970s the shah lost his mandate with many segments of the Iranian population, and his departure sparked a dramatic outburst of electoral competition, even while Khomeini was requiring office seekers to accept his constitutional formula, elevating religious authority over all politics. As the incompatibility of democratic principles with velayat-e faqih became increasingly evident, the regime was, as Professor Abrahamian described it, “clearly. . . losing control in the streets.” What Iranians today know all too well, and Americans would profit by better understanding, is that the “theocrats” secured control of Iran not by bringing down the shah, but by bringing down the revolution.

It is not the only historical misperception that has stood uncorrected. Speculation has surrounded the Obama administration’s Iran diplomacy that some kind of gesture by the United States—if not an outright apology, then an acknowledgement of past mistakes—would be extended as atonement for the CIA coup that deposed nationalist Prime Minister Mohammad Mossadegh in 1953. Indeed, Tehran has repeatedly demanded it. Yet, for historical justice to be served, a representative of the supreme leader would need to affix his signature to any such mea culpa alongside that of the president’s representative, reflecting the fact that the leading clerics at the time, including Khomeini’s mentor Ayatollah Abol-Ghasem Kashani, openly colluded with the Pahlavi dynasty and backed the ouster of Mossadegh.

Kashani later pronounced Mossadegh guilty of betraying the jihad, and said he deserved the death penalty. Khomeini himself expressed satisfaction with Mossadegh’s downfall. Here again, the clerics have airbrushed their place in Iran’s turbulent political evolution for the West’s edification.

June 1981—a cataclysmic event in Iran’s modern political history, second only perhaps to the shah’s demise—is relevant to understanding why the clerics responded with deadly force to the challenge of the Green uprising and the return of citizens to the streets en masse in 2009, demanding democratic accountability. Nor was the closed (and rigged) electoral process the only longstanding source of disaffection: Khomeini’s fundamentalist forces early on had targeted Iran’s universities with their “cultural revolution” to suppress mainly leftist critics, whose appeal among students and intellectuals further highlighted their lack of political legitimacy.

Despite their comprehensive efforts to silence intellectual dissent, the torch of antiauthoritarian resistance carried through the 1980s to the next generation, resurfacing in public protests during July of 1999. People took to the streets after regime forces closed a student paper and violently attacked a dormitory at Tehran University, reportedly throwing students from windows.

Fear of the “street,” consequently, was almost certainly a central consideration behind Iran’s costly (and continuing) intervention in Syria after pro-democracy Arab Spring demonstrations first arose there in 2011. More than any other partisan in the Syria conflict, Iran is credited with keeping a minority secular dictatorship in power, in defiance of President Obama’s vow that Bashar al-Assad must go, a determined if ill-equipped Syrian resistance, and UN-backed efforts to foster a national reconciliation process entailing a transition to new leadership.

Similarly in Iraq, the Quds Force’s active direction of client Shia parties and militias, reported to be “carrying out kidnappings and murders and restricting the movement of Sunni Arab civilians,” has impeded that country’s efforts toward a functioning multiethnic constitutional system, and further imperiled Iraq’s fragile national unity.

Islamic State may be a concern to Iran, but successful, multiethnic constitutional republics replacing the Baathist dictatorships in Syria and Iraq would be a much greater concern. For Tehran, the potential that an eastward-spreading Arab Spring could ignite a new Persian Spring was, and remains, a constant danger to the Islamic Republic’s grip on the reins of power, to be prevented at all costs.

The deficit of legitimacy underlying the mullahs’ claim to power remains a blind spot in Washington’s collective understanding of the Iranian revolution, overlooked in the wake of the hostage crisis. It may account for the absence of critical thinking to challenge, for example, the regime’s narrative of its eight-year war with Saddam Hussein’s Iraq, never questioning why Khomeini, after regaining by mid-1982 all the Iranian territory seized by Iraq in 1980, prosecuted the war for six more years, during which Iran suffered 90 percent of its casualties and depleted its economy.

Just as the seizure of the U.S. embassy in 1979 had empowered the clerics against contending political forces, the war with Iraq provided the supreme leader with an emergency mandate to crush growing internal dissent, impose religious and cultural requirements, and appropriate all necessary resources to assure the regime’s primacy and control. While every Iranian schoolchild and adult throughout the 1980s was fed the jingoistic line justifying these extreme sacrifices, Khomeini’s role in perpetuating the war is by no means universally recalled by Iranians in a favorable light.

A similar lack of skepticism has left U.S. policymakers with no insight as to why a hojatoleslam—a cleric with religious status well below others at the time—belatedly became Khomeini’s chosen successor as supreme leader rather than the broadly respected Grand Ayatollah Hossein Ali Montazeri; no benign explanation as to why Iran would choose to pursue major nuclear infrastructure investments instead of far more accessible and cost-effective energy options, given its meager national uranium supplies; and no reflection on whether considerations other than sanctions-induced financial duress may have led Iran to the P5+1 negotiating table.

Similarly, one saw no speculation in Washington that factors other than personal legal transgressions could have lain behind the arrest and imprisonment of the Washington Post’s correspondent Jason Rezaian—or curiosity about what the regime hoped to hide by deterring Western correspondents from seeking visas to report from Iran at that time. A clue may be found in the emerging story of another U.S. hostage, former CIA contractor Robert Levinson (still held by Iran), whom the Iranians reportedly offered via the French government in 2011 to release in exchange for conclusions, in a pending IAEA report, that Iran’s nuclear program was “peaceful” in nature.

This credulous U.S. approach to Iranian affairs has not been helped by what might delicately be termed self-censorship on the part of Western correspondents and media companies, who know they would be shut out of Iran if their reporting sufficiently displeased the regime. For too long, U.S. policy has reacted to Iranian government actions and words without a credible functional understanding of the nature of this important international actor.

The Regime’s “Job One”: Maintain Control

During the regime’s formative years, the man who would in 1989 succeed Khomeini as supreme leader, Ali Khamenei, worked in partnership with Rafsanjani to implement Khomeini’s doctrine of bast (expansion) and hefz (preservation), the two facets assuring continuity of the Islamic revolution. Their work was at the center of Khomeini’s velayat-e faqih project. While both figures are today identified with conflicting political tendencies and loyalists, the larger reality is that bast and hefz remain core tenets of the Islamic Republic of Iran.

Similarly, the surreptitious and aggressive buildup at home of Iran’s uranium enrichment capacity, and associated “possible military dimensions” of its nuclear program, combined with widely condemned and worsening human rights abuses, restrictions on journalists, monitoring and propaganda imposed within the information space, and seizure of control over much of the functioning economy—all these and other domestic measures fulfill the doctrine of hefz. To stay in power, the regime must monopolize the levers of power within the country.