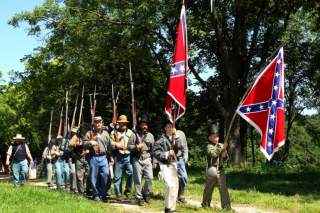 One hundred and fifty years ago this month, the American Civil War ended, dashing the plans of southern U.S. elites for an independent Confederate States of America.

Though Union forces compelled the surrender of the Confederate army in April 1865, the Confederacy forfeited, by mistake and misfortune, the one potential asset that could have turned the tide much sooner: international recognition from an initially sympathetic Europe. In that regard, the Confederacy lost the war in London and Paris as much as it lost it in Gettysburg and Appomattox. Americans today of all backgrounds should be delighted that the United States didn’t cleave into two countries, and the Union’s victory cleared the way for constitutional revisions that brought the United States closer to closing the gap between the idealism of its founding premise and the ugly realities of slavery and racial inequality. While there are many lessons from the wrenching five-year war, the Confederacy’s failures amount to a parable about the importance of diplomacy for young and emerging nations. When leaders of independence movements develop strong regional and international links, it can make the difference between success and failure.

Even before the halfway point of the war, Confederate leaders had lost the opportunity, through errors largely of their own making, to achieve recognition from Great Britain, France and other countries in Europe and even Latin America. That, in turn, could have paved the way for vital financing and material support that could have ended the war sooner—and in the Confederacy’s favor. Southern leaders failed in at least three aspects.

First and foremost, the CSA's foreign policy was disordered from inception. Its government had three different Secretaries of State in its first thirteen months, none of whom had any real experience in foreign policy. The third and final official, Judah Benjamin, a Louisiana attorney who holds the distinction of being the first Jewish U.S. Senator, served from March 1862 until the Confederacy’s fall. Though he had no real basis in foreign affairs, he was undoubtedly one of the brightest statesmen within the Confederacy. Nevertheless, while the CSA dithered, U.S. Secretary of State William Seward, a former New York governor and U.S. senator, was already playing a sophisticated diplomatic game with Great Britain and France in a bid to maintain European neutrality. He used the forceful “stick” of potential U.S. military engagement against Great Britain to prevent any early recognition of the Confederacy while also using the “carrot” of Union grain exports to reinforce ties between northern U.S. and British merchants. When, in November 1861, the Union navy intercepted the HMS Trent, fomenting widespread anti-American sentiment in Great Britain, Seward skillfully relented to British pressure and released the ship, deflating what was fast becoming a diplomatic crisis. Even so, the Confederacy didn't have any Jeffersons or Franklins on its bench of diplomats. Its envoy to Mexico, John T. Pickett, so bungled relations that Mexican president Benito Juarez had him arrested when the Confederate ambassador ended up in a brawl. His background as a filibusterer in Cuba and Nicaragua left Mexican officials wary that Pickett and the Confederates might one day choose to incorporate Mexico into the CSA. Embarrassed at its envoy’s behavior, Richmond promptly recalled him.

Secondly, throughout the war’s early months, Confederate president Jefferson Davis assumed that European dependence on Southern cotton would be sufficient to win Europe's support. Initially, Davis may have been right, and the British merchant class supported the Confederacy for precisely this reason. But Davis' initial plan to withhold cotton from global markets backfired spectacularly, not least of all because of the effective Union blockade of all Confederate exports, including cotton. European stocks of cotton didn't dwindle as fast as the CSA expected, and, when they did, the British found new suppliers in Egypt, India and elsewhere within their colonial empire. It’s impossible to overstate Davis’ miscalculation in depending on “king cotton” diplomacy. By the time the CSA realized it needed a more sophisticated foreign policy, it had wasted nearly a year. To his credit, Benjamin had opposed Davis’ cotton diplomacy, instead arguing that the CSA should ship more cotton to Europe in the hope of raising capital and goodwill.

Finally, even beyond the failure of cotton diplomacy, the CSA bungled opportunities to win support from sympathetic governments. The American Revolutionary War of the 1770s should have demonstrated just how important foreign assistance could be for a new country. Both the British prime minister, Lord Palmerston, and the French emperor, Napoleon III, were initially disposed in favor of the Confederacy. Though the United States and Great Britain, in the years after the War of 1812, increasingly worked through their differences with treaties and diplomacy, even Seward is said to have considered using the war as an occasion to draw Great Britain into war as a means of annexing Canada, and the British government sent additional troops and naval forces to fortify its North American positions. The British Slavery Abolition Act of 1833 essentially ended slavery throughout the British empire, and by 1861, only a handful of states (including Cuba and Brazil) still permitted slavery. Notwithstanding the growing European distaste for slavery, European powers realized it would be in their national interest to divide the United States into two weaker components that could easily be played against each other in future international affairs. The British had obvious interests to the north in Canada, and after 1862, the French had interests to the south, when they occupied Mexico, ostensibly over trade and debt disputes. But James Mason and John Slidell, the respective CSA envoys to Britain and France, never developed the relationships to make the case for recognition (or material support) forcefully. Though the French lost no time in formally recognizing the rapidly unified kingdom of Italy in the early 1860s, Napoleon III’s government continually hesitated to take unilateral action without British support. For Mason's part, attempts to force Great Britain to take a stand against the Union blockade actually caused the British government to accept the Union blockade's legality.

By 1863, the Union's military victories made the chances of European recognition even more remote, and Lincoln's rhetorical skill successfully transformed the war into a moral fight against slavery. A more skilled team of diplomats and a stronger emphasis on foreign policy in the war's early weeks and months could have potentially turned the tide for the Confederacy. It’s a lesson that young and aspirational nation-states can take to heart today.