What Will Happen If Congress Strengthens Russia Sanctions? 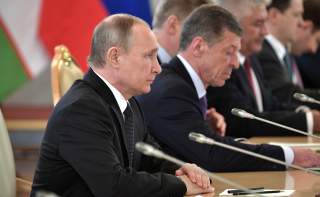 President Trump’s road to easing sanctions targeting Russia just became immensely more difficult. In a rare display of bipartisan unity, the Senate voted in favor of new sanctions against Russia by a margin of 97–2 on Wednesday afternoon. Republicans not only joined Democrats in supporting the initiative, but also helped spearhead it. The motion, which came in the form of an amendment to the Countering Iran’s Destabilizing Activities Act, is sponsored by Sen. Mike Crapo, chair of the Senate Banking Committee. Among its cosponsors it counts an equal number of Republicans and Democrats, including prominent GOP leaders like Senate majority leader Mitch McConnell, Foreign Relations Committee chair Bob Corker and Armed Services Committee chair John McCain.

This amendment introduces several measures aimed at penalizing Russia over issues ranging from its actions in Ukraine and Syria to alleged cyberattacks during the last presidential election. It legislates previous executive-order sanctions and requires the president to seek congressional approval to relax or remove them. Moreover, it institutes new sanctions on certain Russian industries, such as mining, metals, shipping and railways, and paves the way for possible new sanctions on individuals. Finally, it pledges to provide “robust assistance to strengthen democratic institutions and counter disinformation across Central and Eastern European countries.”

Wednesday’s vote is the product of a long-standing congressional desire for additional sanctions. Even prior to Trump’s inauguration, a coalition of Republicans and Democrats in the Senate introduced the Counteracting Russian Hostilities Act. Not long after Trump assumed office, a bipartisan group of senators put forward the Russian Sanctions Review Act. Many of the proposals outlined in the amendment, such as instituting new sanctions over Russia’s international conduct and limiting the president’s ability to lift current sanctions, originated from these two bills.

Momentum for Russia sanctions legislation has dramatically increased over the past month. A major turning point came on May 25, when Senator Corker proclaimed new sanctions imminent. Previously, the Foreign Relations Committee chair was one of the few voices in Republican leadership urging caution on the matter, arguing that the Senate Intelligence Committee should first complete its investigation into Russia’s intervention in the 2016 election. Further pressure mounted last week, when top Democrats made it clear that their support for the Iran sanctions bill, which is popular among Republicans, was contingent upon additional Russia sanctions. On the eve of Attorney General Jeff Sessions’s testimony before the Senate over an alleged meeting with the Russian ambassador, Republicans and Democrats on the Banking and Foreign Relations Committees announced an agreement to strengthen and expand Russia sanctions. Two days later, the Senate overwhelmingly approved the motion.

As the push for more sanctions gained steam, the administration sent mixed signals about its stance. On May 26, National Economic Council director Gary Cohn hinted that the Trump White House might back additional sanctions. By contrast, Secretary of State Rex Tillerson offered a more cautious appraisal in a recent Senate Foreign Relations Committee testimony, expressing concern that new sanctions might limit his efforts to achieve progress in talks with Russia. A source familiar with the administration’s thinking blamed these conflicting messages on the fact that “there is not yet a defined policy towards Russia,” thereby creating an environment where different members of the Trump team make public statements without reference to a common strategic framework.

During deliberations surrounding the amendment, its proponents conceded that current sanctions did not inflict serious financial costs or significantly deter Russia. Speaking on the Senate floor on Tuesday, Senator Crapo admitted, “The Russians have largely learned to live in the economic confines of the existing sanctions regime.” He also acknowledged, “In Putin’s calculation, the costs of the sanctions do not outweigh the benefits of occupying Crimea and contributing to unrest in the Ukraine, to continue supporting the Assad regime’s assault on civilians in Syria, and conducting cyberattacks on people and companies and institutions around the globe.”

Supporters of the motion did not elaborate on what sort of economic impact they expected the proposed sanctions to have, or how Russia’s foreign policy would change as a result. Rather, they stressed the need to send a message that Moscow’s conduct is unacceptable and will be punished “for trying to destroy democracy.” In the same speech, Senator Crapo asserted that the amendment demonstrates “the United States’ unflagging commitment to the sanctity of territorial integrity, human rights, and good governance” as well as “resolve in responding to cyberattacks against the United States’ citizens and entities.”

The only two senators opposing the proposition were Rand Paul and Mike Lee. However, the dissent of at least one of them was motivated less by a desire for stabilization with Russia, and more by objections to other aspects of the amendment. Conn Carroll, communications director for Senator Lee, cited the planned allocation of funds “to international organizations that have promoted progressive policies unrelated to countering Russia that alienate conservatives in Europe” as the main issue for the Republican from Utah.

Although the Senate decisively passed the amendment, the House of Representatives may offer weaker endorsement. A congressional aide knowledgeable of the situation told the National Interest that the amendment’s success in the Senate “puts real pressure on the House to act.” Nevertheless, “Republican leadership in the House may try to buy time by using regular order and opening the bill up to amendment and sending it back to the Senate, which would amount to a political game of hot potato.” Regardless of how swiftly House Republicans rally around the amendment, the aide concludes, “the Senate just ensured that any action [by Trump] deemed friendly toward Moscow will be deemed unfriendly toward Congress.”

In the probable event that the House of Representatives approves the Russia sanctions package and Trump is powerless to stop it, Moscow is likely to retaliate. In the lead-up to Wednesday’s vote, Russian elites warned of a hard-hitting response. Pointing to Russia’s military escalation in Syria, Vladimir Solovyov, a prominent TV host who interviewed Putin numerous times, asked during his Tuesday show, “Did no one in Congress conduct analytical work and notice that pressure from sanctions only leads to a hardening of Russia’s approach rather than create a desire for dialogue?” Likewise, Vladimir Dzhabarov, first deputy chairman of the Federation Council’s International Affairs Committee, declared, “We need to tighten sanctions against the United States in all areas where we cooperate.” So far, however, Russia’s response to U.S. sanctions has widely been considered inconsequential.

A growing disinclination to compromise with the United States over sanctions is not limited to Russian media personalities and officials. The Levada Center, one of Russia’s few independent polling agencies, recently published a study showing that 70 percent of Russians oppose making concessions in return for sanctions relief. This represents a 5 percent increase since November 2015. Consequently, the Kremlin risks provoking popular displeasure if it adopts a softer posture towards the United States. Along with public opinion, the negative reaction from some European countries could push Putin to take a more defiant stance. The Russian leader may feel emboldened following Germany’s and Austria’s surprising condemnation of the new sanctions, assuming that the United States and its allies are divided on the question.

In this sense, Trump finds himself in a difficult position. Strong congressional support for punitive action against Moscow complicates his efforts at starting a new dialogue with Russia. Some of the United States’ European allies, already displeased with the administration’s conduct over a whole host of issues, may become further aggravated. At the same time, opposing the amendment is politically costly, not least because his subordinates have yet to form a united front on this issue. Only one thing is certain: When Trump meets with Putin next month at the G-20 summit, he will have a titanic balancing act ahead of him.